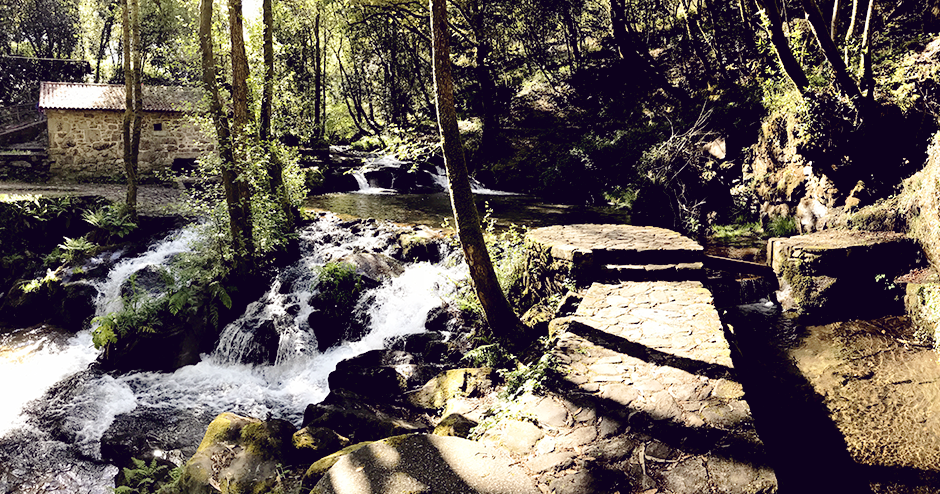 Ribadumia is a municipality in the O Salnés region located in the Ría de Arousa, although, oddly enough, its territory hardly ever borders with the sea. Its proximity to the ocean can be felt, nevertheless: occupying a wide, flat and fertile plain, Ribadumia is next to Cambados and Vilanova de Arousa, both very popular for tourists. We propose a route to the sounds of one of the rivers that cross this territory to get to know its heritage and natural wealth.

The municipality of Ribadumia is also one of the largest grape producers for the Rías Baixas Designation of Origin wine. In common terms there is even a specific name for the O Salnés red wine that refers to one of the parishes of the municipality, Barrantes. Ribadumia leans over the south bank of the river Umia, which gives it its name. The Route of Stone and Water flows by one of the Umia tributaries, the Armenteira River, beginning in Barrantes and ending, already in neighbouring Meis, by the monastery that christens the water current.

The river will keep up with us throughout the journey. It is impressive to see the intensive use these types of currents received not many years ago: along the route you will see a multitude of mills, jumps and channels meant to direct all the force of the water towards the blades that moved the grinding stones, testimony to the importance of the flour industry at the time. Many of these constructions have been recently restored, as well as the bridges and the river crossings and, most importantly, the road, which makes the route, although long, easy to walk. The stretch between Barrantes and A Armenteira is about eight kilometres long, and the route, hugely popular, is linear. It is for this reason that you must take into account the return trip downwards or the possibility of getting down by car, taxi or another form of transport.

In the initial part of the journey you will find an oddity that is worth a visit. It is the so-called “Aldea labrega”, a meadow covered with native trees in which stone statues have been placed representing many traditional Galician trades, as well as architectural elements such as granaries, fountains, stone crosses and even a chapel, all of them built life-size. It is an ideal place to make a stop, freshen up, and gather strength for the last section of the route, a bit steeper, that leads to the Monastery of A Armenteira.

The monastery that marks the end of the Route of Stone and Water is spectacular. Founded in the twelfth century, it preserves a beautiful Romanesque portal, somber and severe, with narrow windows and a simplicity that transports us to the deepest parts of the Middle Ages. Around the monastery there are several fountains and also bars to make a stop and gather strength before starting the return trip. Very close to the monastery you can also find a centre dedicated to promoting the practice of mountain biking, with routes for cyclists of all levels touring the roads in the area.