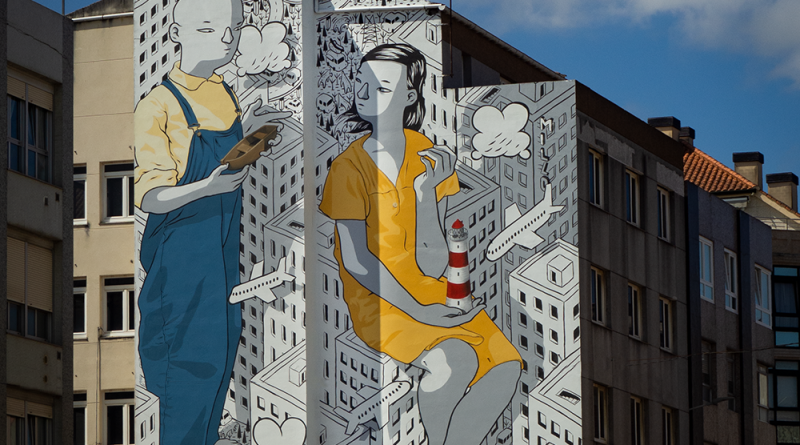 Who said that urban art is something exclusive to large metropolises? Villas and cities in Galicia have claimed themselves in recent years to be spaces of reference for those creators who transform empty walls of buildings and urban infrastructures into colourful canvases. Competitions, festivals and other initiatives that combine the fight against feism with the promotion of urban culture have turned the streets of several towns into authentic open-air museums. Below we offer you some visits that you cannot miss if you want to enjoy the works of the best Galician graffiti artists and the most renowned artists on the international scene.

The potential of urban art to transform and promote a neighbourhood has a good proof in Ferrol. As Meninas de Canido is a project created by the local artist Eduardo Hermida in 2008 to fight against the abandonment of the Canido neighbourhood. His passion for Velázquez’s masterpiece was the reason why this initiative has focused on the reinterpretation of the famous “meninas” and has ended up turning them into another sign of Ferrol’s identity. Hundreds of works in which national and international creators reinvent the figures of Velázquez’s painting from their particular point of view decorate the facades and various public spaces of the Canido district and guide a surprising route through its streets.

The DesOrdes Creativas street art festival starts more than a decade ago and as its name suggests, it is held in Ordes, in the province of A Coruña, and promotes critical thinking. The members of the local artistic collective Mutante Creativo are responsible for this event, which has allowed some 70 murals to decorate the streets of Ordes and creators from half the world have passed through there to leave their works alongside those of Galician artists and from the rest of Spain. All of them form, in the words of their organizers, “a great public and free open-air museum” that can be visited by following the map drawn up for this purpose.

Two initiatives channel the commitment to urban art in the capital of the Bergantiños region of A Coruña. In 2013, Derrubando Muros con Pintura was born, a project that, in honour of the town’s name, began with an oak tree mural and quickly grew with the involvement of a large group of local artists. Its success led to the launch of the Rexenera Fest two years later, an urban art festival that opened up the proposal to the participation of creators from all over the world and led to the name of Carballo crossing borders. The legacy of both initiatives has become an important tourist attraction that the Council has promoted with the design of several routes that allow the most outstanding creations to be seen.

The commitment to urban art in the city of Vigo is also based on two main initiatives. Vigo, city of colour is an urban art festival that was born in 2015 and although it is mainly focused on local creators, it has also given room to international collaborations. About a hundred creations already populate the streets of Vigo. Besides, graffiti is also a very present element in another cultural event of reference in the city of Vigo: O Marisquiño. Although sport is the central theme of this festival that was born in 2001 and which includes competitions on the international skate, MTB and BMX circuits, every year the programme includes other urban culture events, such as graffiti.

Just four years of life have been enough for the municipality of As Pontes de García Rodríguez to join the list of towns that boast of having been transformed into an open-air museum dedicated to urban art. The As Pontes enPEZAS project has allowed fifty of these “pieces” in different formats to decorate the streets of this municipality. The town council also encourages the participation of the local people by organising routes and workshops, and by encouraging the residents to propose new creations and locations.

A Barcala, O Temple and the municipal capital are the three areas of Cambre where you can contemplate and admire the work done by the participants in the Cromático Mural Fest. Just over a dozen works by mainly Galician artists, but also from other parts of Spain and some creators from Italy and Mexico, are the result of the three editions held to date and whose programmes have also included workshops and guided tours.

Some twenty creators left their mark on the streets of the O Orzán district of A Coruña in 2019 with the Ruarte Fest. Walls, blinds in shops and hotel establishments and even doorways in homes and windows served as canvases for an initiative that gave continuity in the form of a festival to a previous project to recover degraded urban spaces. These new creations were thus added to the works that already adorned infrastructures such as parks and viaducts.