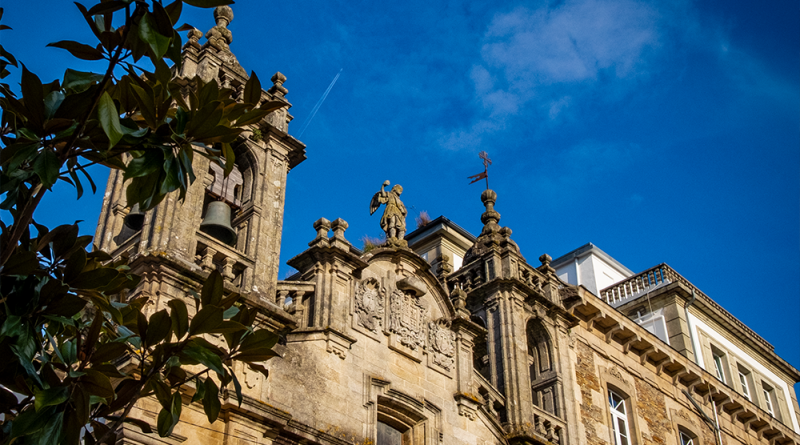 Patron saint of Lugo, the city where he was born in 833, Saint Froilán is a symbol of devotion, festivity and history. This founder of monasteries, who performed several miracles (the most famous being that of the taming of the wolf, next to which he is usually represented) and who became bishop of León from 900 until his death in 904, is still very present in the city of the Wall through the famous festivities to which he gives his name and the parish and church of the same name. But that temple was not always dedicated to Saint Froilán, but its history predates its designation as a parish church and opens the door to another very important building in the history of the city, although it has now disappeared.

In fact, the sculpture that presides over the façade of the church does not represent Saint Froilán, but Saint Bartolomé. This is because it was Saint Bartolomé who gave his name to the hospital of which the church was originally part and whose foundation is now 400 years old. It was on 7 April 1621 when the bishop of Lugo, Alonso López Gallo, made a donation for the construction of an enclosure to care for the sick. This was the first step in the project to construct a building that would bring together the various medieval hospitals that survived in the city at that time. López Gallo, who had already administered other centres in his previous posts, established that the new hospital in Lugo should also attend to the numerous pilgrims who passed through the city on their way to Santiago de Compostela.

The remains of the old Torre del Conde (Count Tower), owned by the Counts of Lemos, and the space near the Puerta Falsa of the Wall where it was located housed the new hospital, which became operational in the 30s of the XVII century. The Congregation of the Obregones Brothers took charge of its management almost from the beginning, and later it was the members of the Order of St. John of God who took on this responsibility.

Religion, as was customary at the time, played a prominent role in the care provided to the sick. Initially, a chapel was set up in the renovated building of the Counts of Lemos, but in the mid-18th century, with the monks of Saint John of God at the helm and the support of Bishop Francisco Izquierdo y Tavira, it was decided to build a new church. Thus began the construction of the church which, with few variations, has survived to the present day. Its authorship is unknown, but experts identify traces of the Compostelan Baroque in its harmonious façade and point to the participation in its construction of the architect Fray Manuel de los Mártires or someone from his circle. De los Mártires had participated in important projects in Santiago de Compostela, such as the works at the San Domingos de Bonaval convent, of which he was master builder, but he also left his mark on several projects undertaken in Lugo.

The church formed part of the hospital complex until a fire early in the morning of 24 March in the year 1857 affected part of the facilities used for the care of the sick, thus initiating the countdown to the closure of the centre. The damage was limited, but the age of the building and the lack of resources to repair it meant that attempts to ensure its survival in the following years were unsuccessful. Finally, in 1877, the Lugo City Council ordered the demolition of the hospital, thus putting an end to almost 250 years of existence. The church lost its original purpose and became the parish church of San Froilán. Although the statue of San Bartolomé and the coat of arms of the order of Saint John of God that can be seen on its façade remind us of the past of this emblematic temple that currently shares walls with the Milagrosa school.