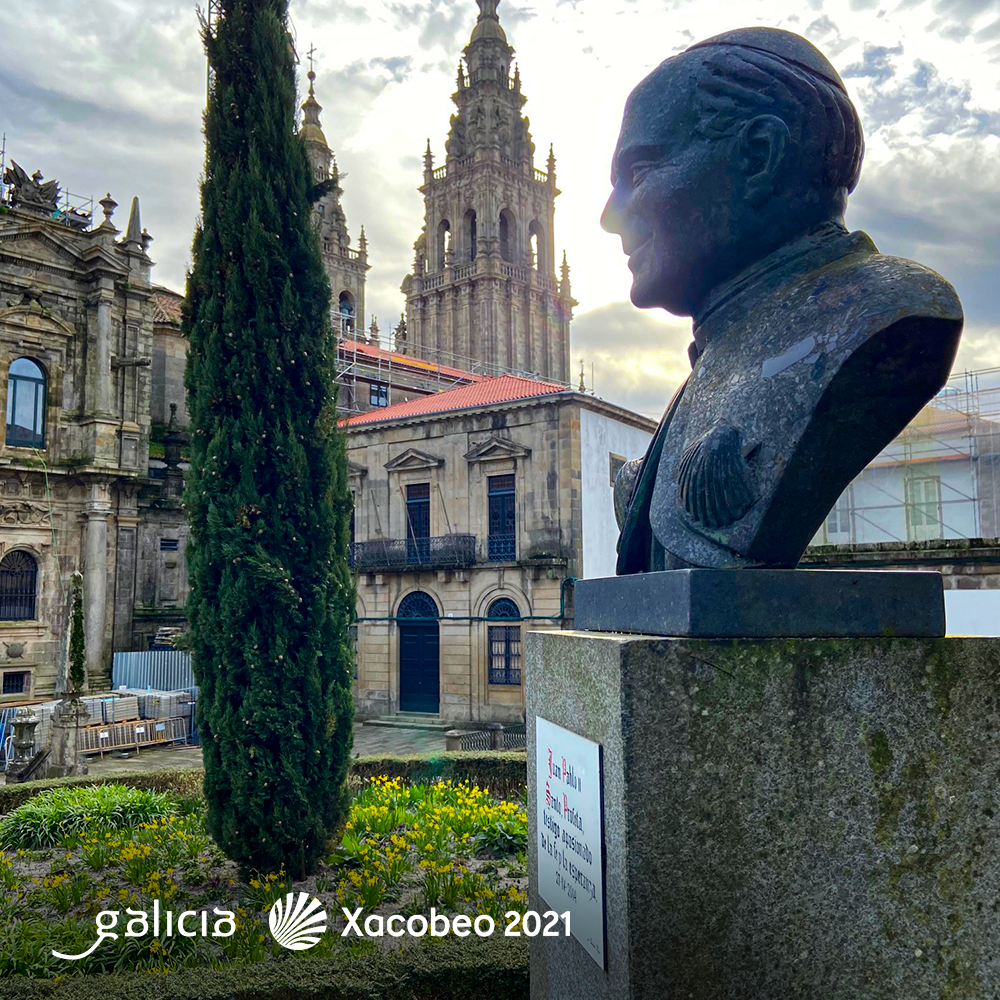 The new Holy Year has once again placed the Camino de Santiago, the city of the Apostle and Galicia in general under the spotlight. There are many pilgrims who are planning to undertake the route to Compostela and who await with excitement the moment when the pandemic of covid allows the routes to fill with life again. Their aim is none other than to follow a thousand-year-old route that since its beginnings has aroused the interest of people from all walks of life, as well as kings, saints, popes and representatives of the world of culture and show business. We invite you to meet some of these illustrious personalities who are already part of the Jacobean history.

The list of monarchs who made the pilgrimage to Santiago started not long after the discovery of the Apostle’s tomb. In fact, King Alfonso II The Chaste is considered to be the first pilgrim on the Pilgrim’s Camino de Santiago, since once he was informed by Bishop Teodomiro of the discovery of the remains, he did not take long to travel to Galicia from Oviedo to verify it and to ratify the veracity of the announcement. That trip was the starting signal for the Jacobean phenomenon and also determined the layout of one of the routes that today make up the various Pilgrims’ Routes to Santiago: the Primitive Way. A statue in the old part of Compostela reminds us of that first journey.

Saint Francis of Assisi and Saint Dominic of Guzman

Beginning of the 13th century

Although nowadays they are questioned by various historians, the pilgrimages to Compostela by Saint Francis of Assisi and Saint Dominic of Guzmán, both founders of the religious orders after which they are named, have been considered to be true for centuries. This is how it is recorded in traditional history books and remains so not only in the memory of Compostela, but also in that of some of the Franciscan and Dominican monasteries in Galicia, whose foundation is directly related to these pilgrimages. The year 1214 is usually cited as the year in which Saint Francis of Assisi arrived in Santiago from Italy. The traces of that journey are still alive in the monastery that the saint ordered to be founded in the vicinity of the cathedral. This episode even has its own legend which tells that Saint Francis gave this commission to a charcoal burner, telling him that he would find what he needed to carry it out in a nearby spring. The treasure he found there was what paid for the work on the monastery. Less than a decade later, it would be Saint Dominic who would have visited Compostela. The priest, historian and archaeologist Antonio López Ferreiro recounts in one of the volumes he dedicated to the history of the church in Compostela that the saint had family ties in Galicia and points out that he was in Santiago on at least two occasions (the first in the late 12th or early 13th century and the second in 1220). It also directly attributes to him the foundation of the convent of San Domingos de Bonaval.

It is no coincidence that the imposing pilgrims’ hospital that stands on one side of the Plaza del Obradoiro bears the name of the Catholic Monarchs. It was Isabella I of Castile and Ferdinand II of Aragon who decided to build the building (now a Parador hotel) after the pilgrimage they made to Santiago in 1486 to seek the Apostle’s help in their war campaigns in the south of the Peninsula. On their return to Castile, the monarchs stopped in O Cebreiro, where, according to the chronicles, they tried to take the miraculous relics kept in the church of Santa María. However, shortly after starting the march, the horses suddenly stopped and refused to continue until they were allowed to return to O Cebreiro. Faced with this situation, the Catholic Monarchs would have opted to return the relics to their original location.

Charles I and Philip II

The grandson of the Catholic Monarchs and their son also form part of the list of monarchs who made a pilgrimage to Compostela. Charles I did so in 1520 as part of the journey that would take him to Aachen to be crowned Holy Roman Emperor. Before going to A Coruña to embark for Germany, he visited the tomb of the Apostle and gathered the Cortes in Santiago to try to raise funds to pay for the trip and the coronation expenses. Another boat trip from A Coruña meant that in 1554 it was his son, Philip II, who visited the tomb of Santiago, although in this case he did not do so as monarch because it was two years before his coronation. Philip II stayed in the hospital built on the initiative of his great-grandparents and made several donations to Compostela Cathedral before embarking on his journey to England to marry Mary Tudor.

His trips to more than a hundred countries led to Pope John Paul II being known as the Pilgrim Pope. The Pope’s two trips to Santiago de Compostela to visit the tomb of the Apostle undoubtedly contributed to this name. The first, in 1982, was also the first visit by a pope to Compostela, since although some of his predecessors had visited Santiago in previous centuries, they had done so before reaching the pinnacle of the Catholic Church. That 1982 pilgrimage helped to relaunch the Jacobean phenomenon and would lay the foundations for a second visit by John Paul II in 1989 to preside over World Youth Day. His successor, Benedict XVI, followed the path opened by John Paul II by visiting Compostela for the Holy Year 2010.

There are many writers who have walked the Camino de Santiago and who have captured in their works the experience of the pilgrimage, thus becoming ambassadors of the route, but surely few before have had as much relevance in their countries of origin as the Brazilian Paulo Coelho and the Koreans Kim Nam Hee and Kim Hyo Sun. Coelho’s experience on the Camino in 1986 was the basis for his book “The Pilgrimage”, and although the author explained that after arriving in O Cebreiro he took a bus to Santiago, he did acknowledge that the experience left an intense mark on him. His work, a true international bestseller, inspired a multitude of people to follow in his footsteps, especially in his native country, and Coelho has since returned to Compostela on several occasions. A similar phenomenon, albeit on a smaller scale, was brought about in South Korea by the works of two female authors who were also won over by the Jacobean phenomenon.  Kim Nam Hee wrote in “The Journey of a Woman Alone”, the experience of her first walk along the French Way in 2005. Since then, she has walked the route to Santiago on four other occasions. Her compatriot Kim Hyo Sun, who has dedicated volumes to the French, Portuguese and Vía de la Plata routes, has also experienced walking to Compostela more than once, and has now walked more than half a dozen routes. Both authors have made a decisive contribution to the success of the Camino in Korea, as have other authors in their respective countries, such as the German presenter and comedian Hape Kerkeling with his work “I’m off then”.

Among the representatives of the world of show business who have made the pilgrimage to Santiago, it is worth mentioning the Hollywood star Shirley MacLaine. The Oscar winner and star of such cinematic masterpieces as “The Apartment” and “Irma La Douce”, completed the French Way in 1994 and the experience of walking the 800 kilometres that separate the Gallic border from Santiago left such a mark on her that she decided to capture it in a book: “The Way. A spiritual journey”. Other stars such as Anthony Quinn, Charlton Heston and Martin Sheen have also been seen on the route to Santiago, although in this case not as pilgrims, but as the protagonists of audiovisual projects inspired and recorded on the route: the miniseries “Camino de Santiago” in the case of Quinn and Heston (1999), and the film “The Way”, in the case of Sheen (2009), who had already visited Santiago a few years earlier, in 2003.

Military camps, other vestiges of the Romanisation of Galicia