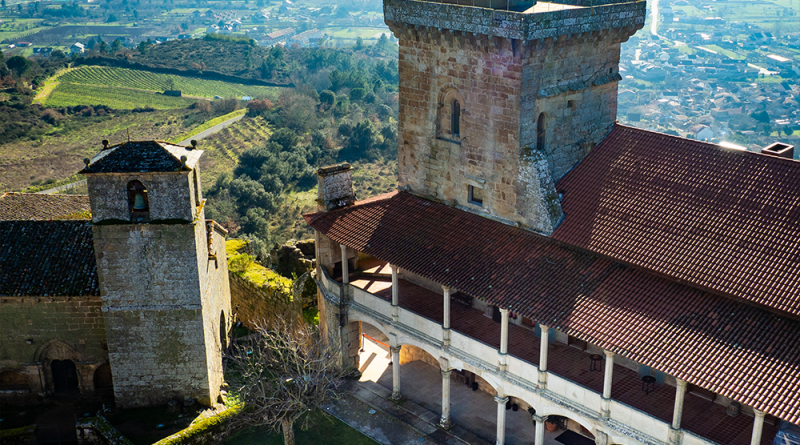 Its imposing silhouette, visible from several kilometers away, is the first sign for the visitor that he is approaching a place out of the ordinary. Its location on a hill from which dominates the entire valley, with the Támega riverbed at its feet and at an important crossroads near the border with Portugal is no coincidence, but reflects the strategic importance that the fortress of Monterrei has played throughout history.

In fact, already in the Cortes de Zamora of 1301 the town is referred to as “the key to the kingdom of Galicia”, something that is manifested today in the fact that it is usually cited as “the largest acropolis of Galicia”. More than a fortress, the enclosure of Monterrei is a small town that was transformed over the centuries to acquire its current spectacular appearance.

The origins of the castle, the first of the monuments built on the site, date back to the 12th century, when it was ordered to be built by Alfonso Henríquez, grandson of King Alfonso VI. Since then, the dimensions and importance of the enclosure would not stop growing, becoming also the scene of several historical episodes. King Pedro I The Cruel settled there for several weeks in 1366 to meet with his allies and prepare the strategy in the confrontation for the throne that he had with his half-brother Enrique de Trastámara. And it was also where King Felipe the Handsome stayed in 1506 to plan his first steps on the throne.

Only a few years before the visit of Felipe the Handsome, at the end of the 15th century one of the first printing presses in Galicia was installed in the castle and from it came out in 1494 the “Missale Auriense”, considered one of the first Galician incunabula and currently preserved in the Diocesan Archive of the Cathedral of Ourense. It can also be assumed that the writer Tirso de Molina, literary pseudonym of the friar Gabriel Téllez, visited the castle of Monterrei at the beginning of the 16th century and used it as a source of inspiration for his play “La gallega Mari-Hernández” (1611), since part of its plot takes place in that fortress.

Other buildings were added to the original castle, such as the Ladies’ Tower, from the late thirteenth or early fourteenth century, and the Homage Tower, built by the first Count of Monterrei, Sancho Sánchez de Ulloa, during the reign of the Catholic Monarchs. With its more than 20 meters high and its wide walls, the Keep is one of the most visible elements of the whole complex. The lintel of its door establishes the year 1482 as the date of completion. In later centuries a belfry was added to the upper part of the tower, which has now disappeared.

The pilgrims’ hospital, built at the end of the 14th century and later rebuilt, although it preserves its Gothic entrance, proves the importance that Monterrei has played as a place of passage for those on their way to Santiago de Compostela along the Silver Way. The church of Santa María, from the 14th or 15th centuries with additions from the 17th century, is also part of the complex. But the other great central element of the enclosure is the Palace of the Counts, built between the sixteenth and seventeenth centuries and which highlights its galleries of arches adorned with coats of arms. Today, together with the old rectory, it houses the facilities of the Parador Castillo de Monterrei.

In the Modern Age, the whole enclosure was reinforced with the construction of two bastioned spaces that were added to the first initial structure expanding in a remarkable way the surface of the set to accommodate in its interior the convents of the Franciscans and the Jesuits. During the 17th and 18th centuries its defenses were also modernized due to the conflicts with Portugal and the War of the Spanish Succession. These reinforcements, the dimensions of the enclosure and its strategic position were possibly some of the reasons that led the Marquis of La Romana to temporarily establish his headquarters there during the War of Independence in 1809.

Declared a national monument in 1931 and now a major tourist attraction, the fortress of Monterrei maintains intact its ability to amaze visitors and make them travel to that past full of stories.