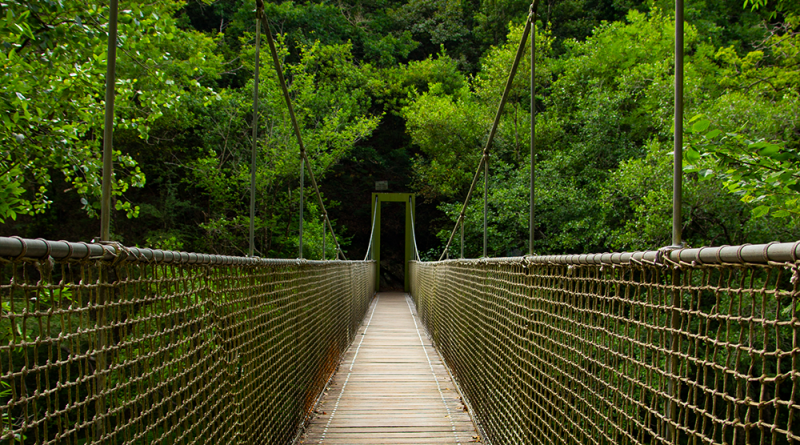 Forests are one of Galicia’s hallmarks. They fill our landscapes with colour and life and are becoming increasingly popular destinations for those who want to enjoy natural spaces. A multitude of places for relaxation, hiking and contemplation of the flora and fauna await us throughout the region, ready to surprise us with their overflowing nature. Here is a selection of forests that will captivate you.

As Pontes, Pontedeume, Cabanas, A Capela and Monfero

The course of the river Eume and the forests that surround it, as it enters the province of A Coruña in the direction of its mouth, form a space of unparalleled natural and scenic value. The Fragas do Eume, declared a natural park in 1997, is one of the best preserved Atlantic riverside forests in Europe and offers visitors a multitude of attractions. Its oaks, chestnuts, birchs, hazels, alders and other tree species combined with the waters of the Eume make up images of great beauty in which botany enthusiasts can also look for the more than 20 varieties of ferns and 200 varieties of lichen that grow there. An ideal place for walking, cycling and even kayaking, the Fragas do Eume are also home to jewels of our heritage, such as the monastery of Caaveiro.

Declared a natural monument two decades ago, this forest of oaks and chestnuts trees stands out for the size of its specimens, which in some cases reach 30 metres in height and 5 metres in perimeter. They were planted at the beginning of the 19th century by the owners of the Pazo de Quiroga, located nearby, which is why the place is also known as Fraga, Carballeira or Souto of Quiroga. It occupies a total surface area of just over 45,000 square metres and it is possible to walk around it along a circular path of just over a kilometre in length, signposted with interpretative panels.

The need to fight against the flooding of the river Landro by draining some of the surrounding land was the reason why the first eucalyptus trees were planted in the parish of Chavín, in Viveiro, in 1860. One of them, known today as the Grandfather of Chavín, boasts of being the tallest tree in the community thanks to its height of more than 60 metres and has been included in the catalogue of singular trees of Galicia. In addition, the entire woodland, made up of more than 600 specimens and covering an area of just over 3 hectares, is considered a natural monument.

This chestnuts forest located in the lands of Manzaneda in Ourense is often cited as an example of the balance between agricultural use and respect for nature. The chestnuts of the trees that can be seen here have been harvested for centuries and some of these specimens reach surprising dimensions. The Pumbariños chestnut tree (included in the catalogue of singular trees of Galicia) is more than 12 metres in circumference and is one of the main natural tourist attractions of the municipality. The Souto de Rozavales has also been declared a natural monument.

The most westerly beeches in southern Europe grow among oaks, chestnuts, holly and other trees in this ancestral autochthonous forest that extends over an area of 600 hectares in the mountainous areas of the municipality of Baleira, in the province of Lugo. A 20-kilometre route, which starts in the recreational area of A Cortevella, allows you to enjoy the place to the full, visiting places such as the source of the river Eo, crossing old bridges and contemplating old mills.

The heart of the Courel Mountains Geopark holds countless natural treasures. One of the most outstanding is located in the municipality of Folgoso do Courel and consists of a primary forest of great diversity. Located in the parish of Seoane, the Devesa de Rogueira covers an area of 3 square kilometres of forest located on steep slopes and which serves as a habitat for a large number of different animal species, such as roe deer, martens, wildcats, dormice, martens, as well as the endemic species that live in the waters of its streams. A nature classroom, located in the village of Moreda, serves as a gateway to this forest and the route that runs through it.

At the foot of the highest peaks of Galicia, the Pena Trevinca mountains, is another of our most unique forests. The Teixadal de Casaio is the most important group of yew trees in Europe, with three hundred of them. Its location, on a hillside that is difficult to access, has contributed to its conservation and although there are several routes that lead to it, these are routes of high difficulty. It is advisable to have the services of a guide and be prepared to walk for 9 hours along a winding route that reaches an altitude of over 1,800 metres before descending towards the vegetal treasure of Casaio.

The birch trees that give it its name make this space located between the Ribeira Sacra and the Central Massif of Ourense, on the slopes of the Sierra de San Mamede and in the heart of the Natura Network, a special place since it is one of the best examples of Eurosiberian vegetation in the north of the Peninsula. Oaks and holly trees can also be seen in the Bidueiral de Montederramo (or Gabín), a place that, apart from its landscape and natural values, is known for being the scene of some of the crimes committed by Manuel Blanco Romasanta in the mid-19th century, who claimed to be a werewolf who could not control his impulses and whose figure is also related to legendary characters such as the Sacamantecas and the bogeyman.

Forests also grow in the Parque Nacional das Illas Atlánticas de Galicia. The most unique of them all is the one that can be seen on the island of Cortegada, a place that has a long history, as can be seen in its buildings, but which stands out especially for its laurel forest. Strolling among these trees, some of which reach a height of 13 metres, with their gastronomic and curative properties, is one of the experiences that make it worthwhile to embark and sail the waters of the Arousa estuary to reach this destination, so close and yet so far from the landscapes of the mainland.

The waters of the Miño feed, and sometimes flood, this autochthonous forest located in the upper course of what is considered to be the father of all Galician rivers. In a landscape of lagoons, river islands and ponds, centuries-old oak trees and large alders, as well as ash and willow trees, form one of the most important flood forests in the Peninsula and is included in the Terras do Miño Biosphere Reserve. An old mill, the dam built to feed it and the small waterfall formed by the Miño and which gives its name to the place, are other attractions of this space, ideal for strolling and relaxing, when the waters allow it.

Although its dimensions are smaller than when Wenceslao Fernández Flórez sought there the inspiration to write his most famous novel, “The Animated Forest”, the Fraga de Cecebre is still a place full of magic. On the banks of the river Mero or the reservoir of Cecebre, nature offers surprising landscapes to those who follow in the footsteps of the writer’s characters. Villa Florentina also stands there, the house where Fernández Flórez lived and which currently houses the foundation that bears his name.

The course of the river Navea, a tributary of the Bibei and this in turn of the Sil, has given shape to an area of great value, as evidenced by the fact that it has been declared a Protected Landscape. As it passes through the municipality of San Xoán de Río, there is a unique forest popularly known as A Fraga, where numerous oak trees can be found, as well as other tree relatives, the “rebolos”, which also give the place the name of As Reboleiras do Navea. Mouruás is the starting point of a circular route of 6.8 kilometres that also leads to a nature classroom.