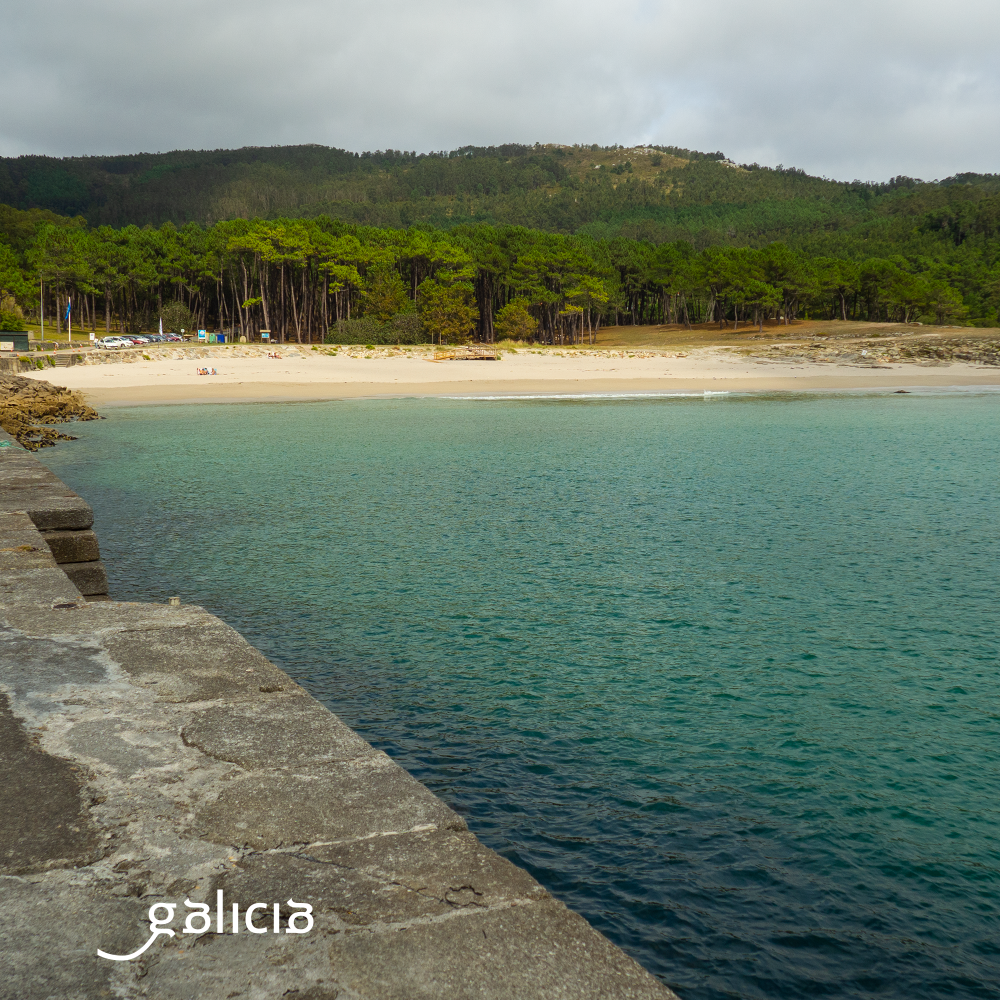 The beaches of Galicia offer much more than white sand and refreshing waters. They are places that deserve to be visited at any time of the year. This is the case of Balarés, a beach located in the municipality of Ponteceso, on the Costa da Morte. It stands out for its value as a leisure space, but also for its unique combination of environmental and historical attractions.

Located in the heart of the estuary of Corme and Laxe, the Balarés beach is a place that attracts a multitude of bathers in summer because of its location, more protected from the waves and the wind than other nearby beaches, and because the environment, with a pine forest and a picnic area.

But, the place has much more to offer, starting with a story in which facts and legends interweave with World War II. The origins of the pier that still closes the north end of the beach date back even further back in time, in the mid-1930s, when the discovery of a titanium deposit in the area drove the establishment of the company Titania S.A. The neighbors of the area, men and women, were who built the original structure of that pier and the oldest people of the area still keep alive the memory of an era and in which comverge the hardness of the times of the Civil War and the postwar period, the possibilities of development and the echoes of Nazi Germany.

The majority of the Balarés ore was sent to the Basque Country to be used in a company owned by Germans. But not even the local protagonists of those events are very clear about the final use of titanium that was extracted from the sand of the place until the 60s, when Titania S.A. was closed. There are those who explain that the mineral was used by the pharmaceutical industry and by matchmakers, but others argue that during the Second World War this mineral was used by the Germans to reinforce the alloys of their weapons. In fact, not far from Balarés, in the municipality of Santa Comba was the Varilongo mine. There it was extracted iron and quartz, but at the beginning of the 40s became a strategic place for the Nazis by the appearance of tungsten. This mineral was known as the “black gold” for its importance in the manufacture of cannons and armor and was also extracted in another nearby place, the mine of Monte Neme, in Carballo.

The boats with the titanium extracted in Balarés departed from the beach pier, but some say that there was also tungsten smuggling. Some people even talk about the presence in the nearby waters of German vessels and the participation Germanic staff in some of the work done on the mainland.

At present, besides the port, you can still see in the surroundings of the area remains of the pools in which the mineral was deposited and processed before being shipped. A walk through the place invites you to discover the vestiges of that time and let your imagination fly trying to complete the unknown of a story yet to be written.