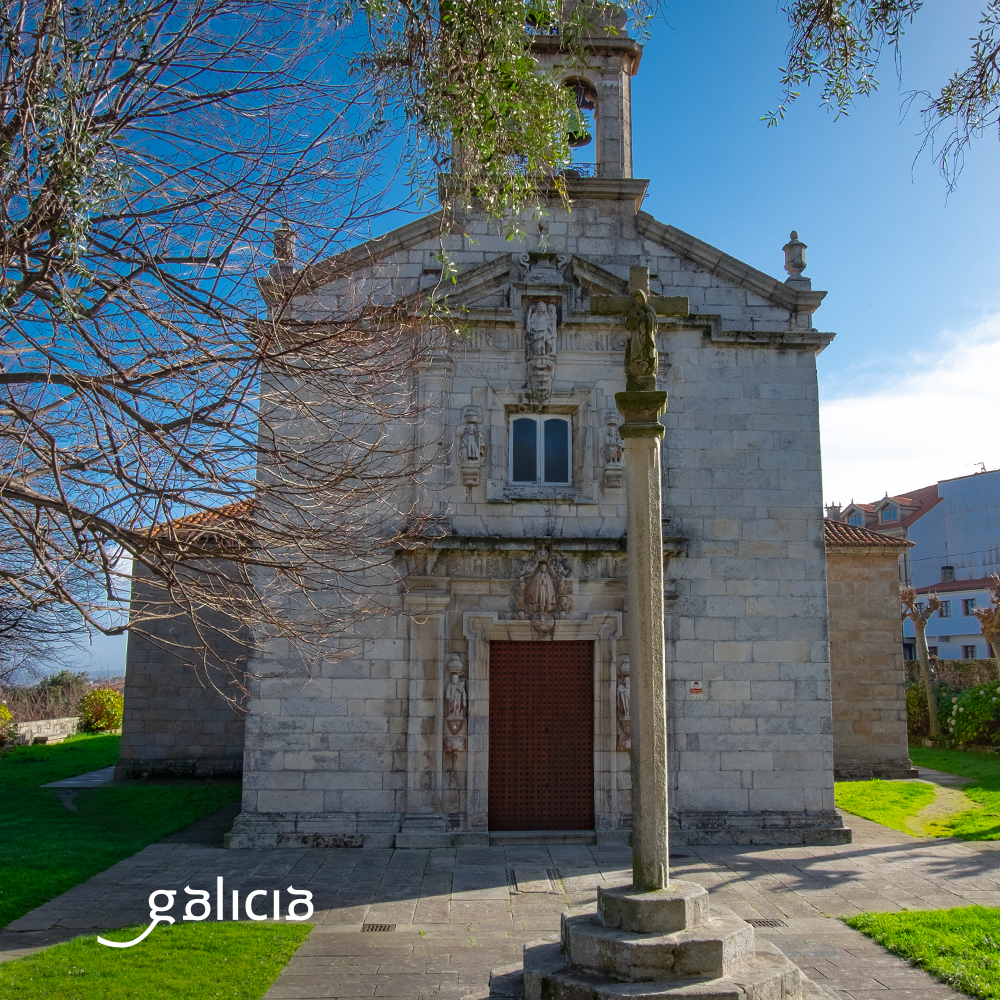 Requiario, the first suevian king of Galicia; the conqueror Almanzor, a small shepherdess and Drake’s soldiers are some of the protagonists of the history of the sanctuary of Our Lady of A Pastoriza, a place of worship and pilgrimage located in Arteixo, but whose trace has transcended the limits of that municipality in A Coruña to attract the attention of the faithful, the curious and the scholars from many other places of Galicia.

The present appearance of the temple is due to the works undertaken in the 17th century under the influence of the predominant baroque at the time, although its original architecture would correspond to the Romanesque of the beginning of the last millennium. And if its legend is true, the first construction would be even older. Its origins would have to be sought at the equator of the first millennium, a time when Requiairio ascended the throne of Gallaecia after the death of his father, King Requila. This is how the illustrious writer Emilia Pardo Bazán relates it in “The Legend of A Pastoriza”, a text she wrote after a visit to the place in June 1887.

The author of “The House of Ulloa” explains that Requiario, after his conversion to Christianity, became the owner of the “primitive image that today, after suffering important modifications, is still venerated under the invocation of Our Lady of the Shepherdess”. And she also tells that it was this same monarch who built the first chapel in the area, a hypothesis he defends with arguments such as the fact that one of the parishes close to A Pastoriza bears the name of Suevos (Suevians), which would confirm the link of that area with the monarch.

The destruction of the original chapel would have taken place five centuries later, at the end of the first millennium, during another episode also narrated by Pardo Bazán: the incursion that the Muslim leader Almanzor carried out through Galicia in 997. The traditional story tells that Almanzor razed the city of Santiago de Compostela, respecting only the tomb of the Apostle and taking the bells of the pre-Romanesque temple to Cordoba. However, the history gathered by the writer points out that the hermitage also suffered the attack of Almanzor’s hosts, resulting in its complete destruction. The image of the Virgin had better luck, since it would have been hidden in a place near the temple shortly before the arrival of the invaders. The Cradle of the Virgin is the name that this place receives today and it is there where another of the crucial episodes of the history/legend of A Pastoriza takes place.

The sculpture that stands today on the crag located, up the mountain, a couple of hundred meters from the sanctuary, commemorates the appearance a couple of centuries later of the image hidden during the attack of Almanzor. As in other miraculous stories of Christian tradition, it was a girl who was shepherding that was responsible for the discovery after seeing some strange lights. After warning the neighbors and lifting some stones, the image appeared. That is, at least, what the legend says. However, the fact that this place was apparently the scene of ancient druidic cults may indicate that, as happened with other similar places, the story was also intended to Christianize it and erase the previous pagan connotations. There is also the King’s Chair, a stone similar to a seat that, according to another local legend, was placed by Requiario to contemplate part of his possessions.

Be that as it may, the discovery of the image and the construction of a new temple destined to house it laid the foundations of a devotion that grew over the centuries and of the fame of a place that would still be the scene of another event between the legend and the history. As it happened with Almanzor, the sanctuary suffered again at the end of the 16th century the collateral damage of the attack on another Galician city. In this case it was the English fleet led by the corsair Francis Drake that attacked A Coruña in 1589. The invasion attempt concluded with the defeat of the English after two weeks of bloody combat, but before leaving the area some soldiers would travel to Arteixo in search of some booty. The legend gathered by Pardo Bazán tells that the English took the image of the Virgin out of the church and tried to destroy it with an axe and breaking it into several pieces. But miraculously they got back together again and the invaders fled without causing any more damage to the place.

Today, both the temple that holds this image and the Cradle of the Virgin are the reason why pilgrims come to Arteixo en masse, especially coinciding with the celebration of San Miguel, every September 29th.