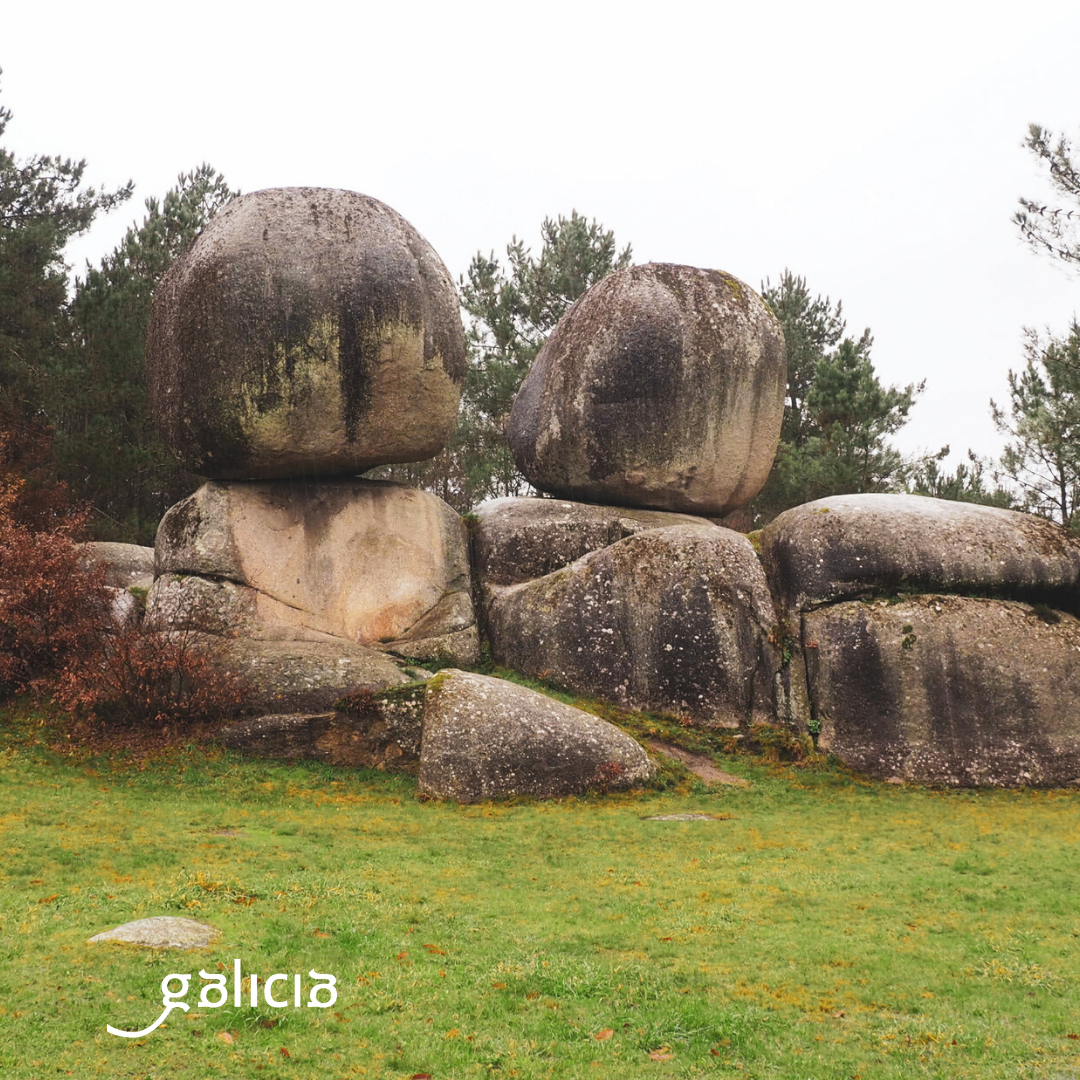 Galicia has always been a territory of legend and many stories that are still told today. In the municipality of Outeiro de Rei, in Lugo, traditions and mythical beliefs abound and, surprisingly, many of them are set in the same place in the council: Penas de Rodas. It is a megalithic complex that does not go unnoticed by visitors, as it is about 620 metres above sea level. The spectacular monument is characterised by two large granite rocks in the shape of a sphere which, despite creating an optical illusion of instability, are heavy and robust. Surrounded by constructions of castros and Roman sites, they are of great symbolic importance.

The visual impact that they cause in those who contemplate them does not leave behind the historical value of these stones.They are considered an important and sacred place of worship, whose origins date back to Roman times. Despite this, their form of creation and arrangement is not entirely clear. Some experts attribute its birth to a natural process led by molten magma that solidified when it came to the surface. However, because of its placement and orientation, other researchers firmly believe that it is an artificial formation of man. Carlos Sánchez-Montaña, an architect and specialist in ancient history, is sure that the placement of the stones is not natural, because their location is very well studied to symbolize the marriage between the sun and the Earth. In spite of that, its origin remains a mystery.

The location of the rocks is the result of various theories, such as their use as a pagan sanctuary or as a calendar (they could be used to predict important dates in the agricultural cycle). The last interpretation led to many investigations that highlight the orientation of the monument towards the sunset during the summer solstice and towards its sunrise during the winter solstice. Nevertheless, not only its morphology and placement are present: the magic that surrounds the area led to fables that are now part of local history.

One of the best known legends about the Sorrows of Rhodes – recorded by the writer Manuel Marina in his poems – refers to the interior of the two spheres, because it is said that one of its stones is full of gold and that the person who managed to break it would become rich. However, the other would be full of tar and, in case of breaking it by mistake, it would spill and devastate the whole area. For this reason, the two rocks are still in a perfect state of conservation: the desire to live has been able to achieve the ambition of getting the gold.

Related to the previous one, another legend refers to the hypothetical breakage of a single primeval formation that would have led to the formation of the two rocks. At the time of its fall, the original stone would have split in half, spilling all the tar that was inside. The catastrophe petrified all the residents of the area, which would explain the current existence of numerous large stones in the area: they are the bodies of the inhabitants of the place that, due to the passage of time and erosion, adopted the usual shape of those rocks.

On the other hand, the inhabitants of the parish of Gaioso have their own belief about the origin of the Penas de Rodas. Their fable explains that they were created by a goblin or by the devil, who placed them on allí́ to make fun of the men who, without result, would try to move them.

The views from the top of Penas de Rodas and its situation in the middle of a pine forest invite to leisure and rest. To make the visit more comfortable for walkers, a recreational area has been built near the area of the megalithic site, with tables, benches and fountains. In addition, in this same conditioned space and the esplanade in front of the stones, every Sunday before August 12 a busy pilgrimage is held to welcome a large number of visitors. The music, dances, popular games and crafts help every year to revive the legend that surrounds the monument.

Penas de Rodas is one of those places that must be seen from up close, because only in this way is it possible to capture all the majesty and magic of the place. Many visitors come on June 21, but any time is good to enjoy this place full of mysteries and legends.