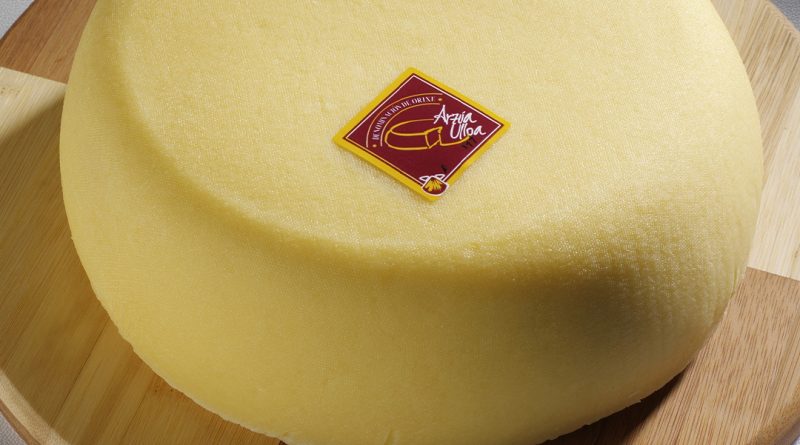 In addition to the four products that have the “Protected Designation of Origin” (D.O.P in Spanish), there are new cheeses and cheese factories in Galicia that prove the strength of the sector. However, before looking to the future, we will deal with the most emblematic Galician cheeses, those that have their quality and history officially recognized.

The Tetilla cheese (D.O.P “Queixo Tetilla”) is undoubtedly the most famous cheese among those that are natural from Galicia. It is made from cow’s milk from the Galician blonde, Friesian or Alpine brown breeds (these are the three most common breeds of cattle in Galician countryside). Its conical shape with a rounded tip is caused by the funnels in which the milk is allowed to curdle at the beginning of the production process. The very name of the cheese refers to this shape, which is reminiscent of the “breasts”. The flavor is smooth, with a sour and salty touch; the rind is thin and yellowish, the inner paste is creamy, soft, whitish. Although the D.O.P. covers the entire Galician territory, this cheese is historically typical of some A Coruña concellos that border the province of Lugo, and that have an important cheese-making tradition: Arzúa, Melide, Curtis. . . The maturation lasts between ten and thirty days.

The San Simon da Costa also has a conical shape, an inverted top. It receives its name from one of the parishes of Vilalba, capital of the Terra Chá region where this cheese, also made from cow’s milk, is produced. The maturation period of San Simón da Costa lasts between 30 and 45 days; after this time, the cheese is smoked with birch wood. It can be purchased in two variants: “ordinary” and “jester” (the latter smaller in size). The rind is hard and greasy, of a toasted ocher color, and the inner paste is fine, almost white and solid; the aroma is smoky.

The first modern references to the San Simón are from the end of the 19th century, although there is speculation about the possible pre-roman origin of the recipe. This cheese earned its D.O.P. in 1991, at a time when production was at a low level and did not leave its native region. Today, San Simón cheese is available in any Galician supermarket and is exported to the rest of Spain and the world; being allowed its elaboration both handmade and industrial.

The Arzúa-Ulloa cheese (also with D.O.P.) is produced in some municipalities in the neighboring regions of Arzúa, Terra de Melide, Ordes, Santiago de Compostela (province of A Coruña), Chantada, Lugo, Ulloa (province of Lugo), Deza, and in the concello of A Estrada (province of Pontevedra); it is indeed an area with a lot of cheese tradition. The Arzúa-Ulloa, made from cow’s milk, has a rounded and flat shape, a somewhat acidic aroma, yellowish rind, a light interior, a creamy and fatty paste; not very salty. Three variants of this cheese are marketed: the “Arzúa-Ulloa” (the most famous, with a two-week maturation process), the “Arzúa-Ulloa de granxa” (made on the same farm from which the milk comes, more artisanal) and the “Arzúa-Ulloa cured” (more solid and intense thanks to its long maturation period of six months).

The Galician cheese with D.O.P. that remains is the “Queixo do Cebreiro”, produced in the eastern province of Lugo, in the mountains of Os Ancares and O Courel. It is made from cow’s milk, although up to 40% goat milk is also allowed. It draws attention for its mushroom or chef’s hat shape, and for its whitish color; sour taste and even a little spicy; interior paste creamy, grainy, very brittle. This cheese has been documented since the 18th century, and achieved a certain fame thanks to the pilgrims who passed through Pedrafita do Cebreiro, the entrance to Galicia according to the French Santiago’s Road. In the 20th century, the production fell to a minimum: it was only made for self-consumption. However, with the introduction of the D.O.P., the production went back up, and although it is still limited in relation to other cheeses in the country, it stands out for its quality: this cheese has already several awards and a growing fame. Depending on the time of maturation, the O Cebreiro can be bought fresh or cured, the latter being of strong flavor and solid pasta.

In addition to these cheeses with officially recognized history and value, Galicia continues to innovate; In recent years, successful new products have appeared (as well as existing recipes have been consolidated). Some of the most prominent cheeses on the current scene, apart from those from D.O.P., are: Touza Vella, O Rexo, Galmesán (or “Galmesano”) and Queso al Pimentón.

The Touza Vella, made in a cheese factory that bears the same name and which is located in the tourist Ribeira Sacra, has the particularity of being made from goat’s milk. It has a hard and grayish outer rind, a solid inner paste that turns whitish after forty days of maturation taken by the most sold product of the cheese factory, the matured Touza Vello.

O Rexo, which bears that name because of the O Rexo Eco-space (near Allariz, Ourense province): a forest crossed by the Arnoia where the sheep graze that give the milk with which this cheese from buttery texture interior paste. The exterior is orange; the maturation period lasts about 90 days.

The Galmesán (or “Galmesano”), whose name merges the words “Galician” and “Parmesan”, has many similarities with the famous Italian cheese, and despite its not many years of life, it has already earned a reputation as one of the best cow’s milk cheeses in Spain. The Galmesán is sold in large pieces or wedges, its inner paste is hard and with grooves. The idea for this cheese arose after the association of some Italian cheesemakers who arrived in Arzúa with local professionals; together, they began to develop a project that over the years would give rise to the Galmesán that can be tasted today.

The Queso al Pimentón (“Cheese with Paprika”) is a Galician cheese made from cow’s milk. It’s particular due to the fact that paprika is added to the paste during production. It belongs to the Ulloa region (Lugo province) and the neighboring concello of Agolada (Pontevedra province).

The truth is that Galicia, as a livestock land that it is, has a great cheese tradition, supported by four products with D.O.P. and by many other cheeses, whether old or new, that prove the vibrancy of the sector today.