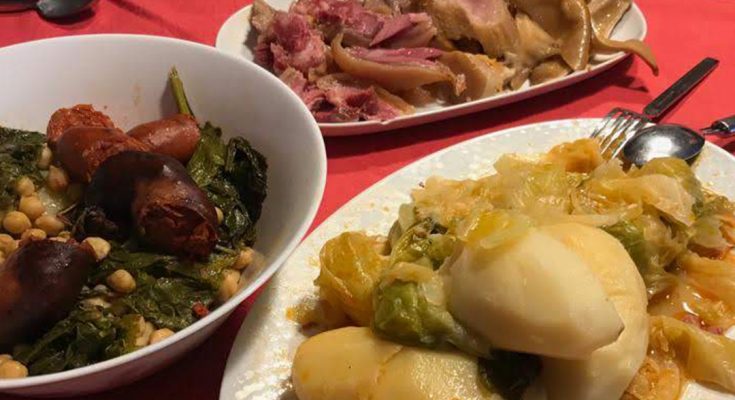 A large part of Galician winter cuisine is linked to the slaughter of the pig, back in San Martín, which supplies us with a varied product for the whole year. But in addition to this safe value, we have excellent seasonal raw material by land, sea (and river) and air, to make recipes that always succeed. Here are some classics of the season:

We start with the Galician broth. The classic is the potato, turnip greens, oil and beans. The turnip greens can be replaced with collard greens, turnip greens or cabbage. It admits companions like bacon, chorizo, ham… It will not be all green. The different taste is also given by the origin of the vegetables, since turnip tops are more or less sweet depending on whether they come from Monfero, or Mondoñedo, or Santiago, for example.

A relative of this dish is the Galician stew. The basic ingredients are: potato, ham, pork shoulder, fresh meat, shank or brisket, bacon, chorizo, vegetables (turnip tops, cabbage, or both), chicken, chickpeas. You can also add ear, rib… The traditional months for stewing are January, February and March, when the meat is at its best and the turnip greens are in season. It is the star dish of carnival, a feast celebration, perfect for pre-Lent feasts: the farewell to meat. The most famous are those of Lalín.

The classic, according to Cunqueiro, is the one that fills three bowls: one with pork, another with chicken and fresh meat, and another with potatoes, sausage and vegetables. Although the number of sources extends according to taste. Formerly, it is well known that the potato, although very much ours, is relatively recent, was accompanied by cooked chestnuts. They called the good stews, the kind that need hours ahead to take advantage of them to taste, «cleric stews».

A purification of the stew is the lacón con grelos, which has become a typical dish in itself: lacón. turnip greens, potatoes and sausages. And, as always, added to taste. The cocido and the lacón are almost always preceded by the tasty stew soup, since these flavorful waters of the essence of cooking are not to be missed.

The androlla and the botillo also come from the pig and are associated with these dishes but, with their uniqueness, they even have a separate party. They get along a lot in A Fonsagrada, O Barco de Valdeorras, Viana do Bolo o Navia de Suarna.

Switching from pork to beef, caldeiro meat is also eaten here in winter, especially in the province of Ourense. The base is the potato, the meat, shank or brisket, the oil, the paprika, and the time, ahead, to cook, and behind, to eat.

And a mix of veal and pork, and legumes on top, we have it in the callos, where the protagonist is the stomach and the legs of the calf and the chickpeas (more chorizo, bacon…). They are eaten throughout the community throughout the year but, of course, they come in best on a cold winter day.

If we talk about birds, an increasingly widespread dish at Christmas is the Galician capon. The most famous, the Vilalba capon. The basic preparation takes brandy, lard and potatoes.

But it won’t be all meat. We must know that from December to March are the best months for seafood. Popularly, it is said that you have to take it in the months with «r» (between September and April). Winter is the time for crabs, spider crabs, shrimp, oysters.

A fish that is practically cooked only in Galicia is the lamprey. The fishing season runs from mid-January until the song of the cuckoo (as the song says, between March and April). Although, in case of heavy rain, it is delayed. The lamprey lives between the sea and the river, like the salmon. It is captured when it returns to the river to spawn, the poor thing, in the pesqueiras. It is very Miño and Ulla. The most typical preparation is Bordeaux, surely imported from Bordeaux by Benedictine monks. With its peculiar flavor, it can be prepared in a variety of ways: grilled, in empanadas, stewed, stuffed… One thing is certain: whoever learns to appreciate it becomes a fan, and every year the ritual of tasting it is in season. It can be said that Arbo is the capital of the lamprey, and even appears on its shield and flag.

After the lamprey, the most peculiar and ancient of the fish, the others already seem more normal to us. But here they are all top notch. Having such good raw material, the preparations are not very complicated, so as not to get vitiated by disguising flavors. A Galician classic is the ajada, very recurrent in fish dishes. Of these, the star is the caldeirada, with seasonal fish (conger eel, rockfish, sea bass, shellfish…).

And, if there is still room for dessert, here are some Galician winter classics: filloas (cooked, sweet, stuffed, fabbeadas…) and carnival ears, which feel good after a laconada; Galician bica; larpeira… A typical treat at the beginning of winter is chestnuts cooked with milk and cinnamon.