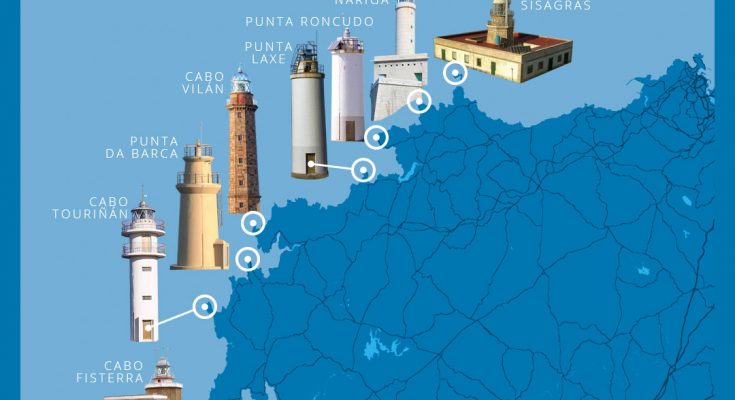 The Costa da Morte is the westernmost coastal strip of Galicia, in the province of A Coruña, which runs from Caión to Carnota. On this front open to the Atlantic, the Galician coastline makes the line that borders the map advance and recede, full of folds, due to the many capes, points, estuaries and small islands that run opposite the ocean. Here the sea is rough and wild, you can see from the name of the coast, which it also is a natural treasure. (The maritime and coastal space is protected by the ZEC and the ZRPA, in the Natura 2000 Network).

Lighthouses are located at the most outstanding ends of the earth, vital for sailors and spectacular stops for walkers. Well, let’s get to know those lighthouses up close. Starting from north to south, from Malpica to Fisterra, we find eight:

Sisargas Islands Lighthouse (Malpica). As Sisargas is an archipelago made up of three islands (Grande, Chica and Malata) and some islets. The lighthouse is on Grande Island. The old one, from 1853, was one of the oldest on the Costa da Morte. Next to it, the current one was built, stone by stone, by the residents of Malpica in 1915. To get to it we depend on private boats, since there is no public transport, from the port of Malpica. From the pier to the lighthouse, a 2 km walk. The islands are an important refuge for birds, especially seagulls and guillemots.

Punta Nariga lighthouse (Barizo, municipality of Malpica). It is the most modern lighthouse in Galicia. It came into operation in 1998. The construction, signed by César Portela, simulates a ship that goes into the sea. The base, triangular, is a viewpoint. At the point towards the sea stands the sculpture O Atlante, by Manolo Coia.

Punta Roncudo lighthouse (Corme, municipality of Ponteceso). This point owes its name to the noise that the sea makes here, so rough and hoarse. It is the paradise of barnacles. The lighthouse has been in operation since 1920. It is of simple construction, not very tall and tiled in white. It is a twin of the Laxe lighthouse, which also started operating at the same time. Between the two they delimit the Laxe estuary. In this dangerous area, many rocks bear the memory of ancient shipwrecks, such as the Petón do millo, named for being where a boat full of corn was shipwrecked, which fed all of Corme for a season. Between the cliffs there are three crosses in memory of three barnacle catchers.

Punta Laxe Lighthouse (Laxe). Twin of the Roncudo lighthouse, but renovated in 1996, when it went from being a beacon to a lighthouse. It is at the top of Mount A Ínsua. From the viewpoint, we see, to the right, the Corme-Laxe estuary; to the left, the open sea and, in the background, the Penal do Veo and the dune of Monte Branco. The area has a rest area with benches. There is also a sculpture: The waiting, by Iria Rodríguez.

Cape Vilán Lighthouse (Camariñas). It was the first lighthouse in Spain to work with electric light, in 1896. Today, it is one of the most powerful. In front of it, the sea beats the Vilán de Fóra islet, separated from land by the O Bufardo pass. Here we also find stones with their own names, such as the one from a Caveira (Skull) or the one from A Moa (Muela). We are in a privileged space, and surely we will see birds in danger of extinction, such as guillemots or cormorants. Here is also the Interpretation Center for shipwrecks, lighthouses and maritime signals, as well as an exhibition hall, shop and café.

Punta da Barca Lighthouse (Muxía). Built in 1926 next to the Sanctuary of A Virxe da Barca, and the famous stones of Abalar, Cadrís and Temón (the supposed parts of the boat: the sail, the hull and the rudder). It is opposite Cape Vilán, delimiting the Camariñas estuary between the two lighthouses.

Cape Touriñán Lighthouse (Muxía). The cape is the westernmost point of mainland Spain. There is an old lighthouse, from 1898, and a later one, from 1981. It is a great place to watch the sunset, especially on certain dates when we know that it is the last sunset in all of continental Europe, because of the rotation of the earth (between March 22 and April 25 and August 18 and September 19, approximately).

Cape Fisterra Lighthouse (Fisterra). End of journey. Formerly it was thought that the world ended here. It is also said that the Camino de Santiago really ends here, when the pilgrimage clothes were burned at the seashore and the return home was undertaken. The lighthouse is from 1853. In 1888 a siren was installed, for when the fog prevents seeing the light from the lighthouse. It emits sound every minute with a range of 25 m and is popularly known as “the Fisterra cow”. Another complement is the Semaphore, built in 1879 to signal the navy. Today it is a rural accommodation. From the lighthouse we can see the Corcubión estuary, Mount Pindo, the Lobeira Islands, and even the Carnota coast. Closer, the islet O Centolo, cause of many shipwrecks.