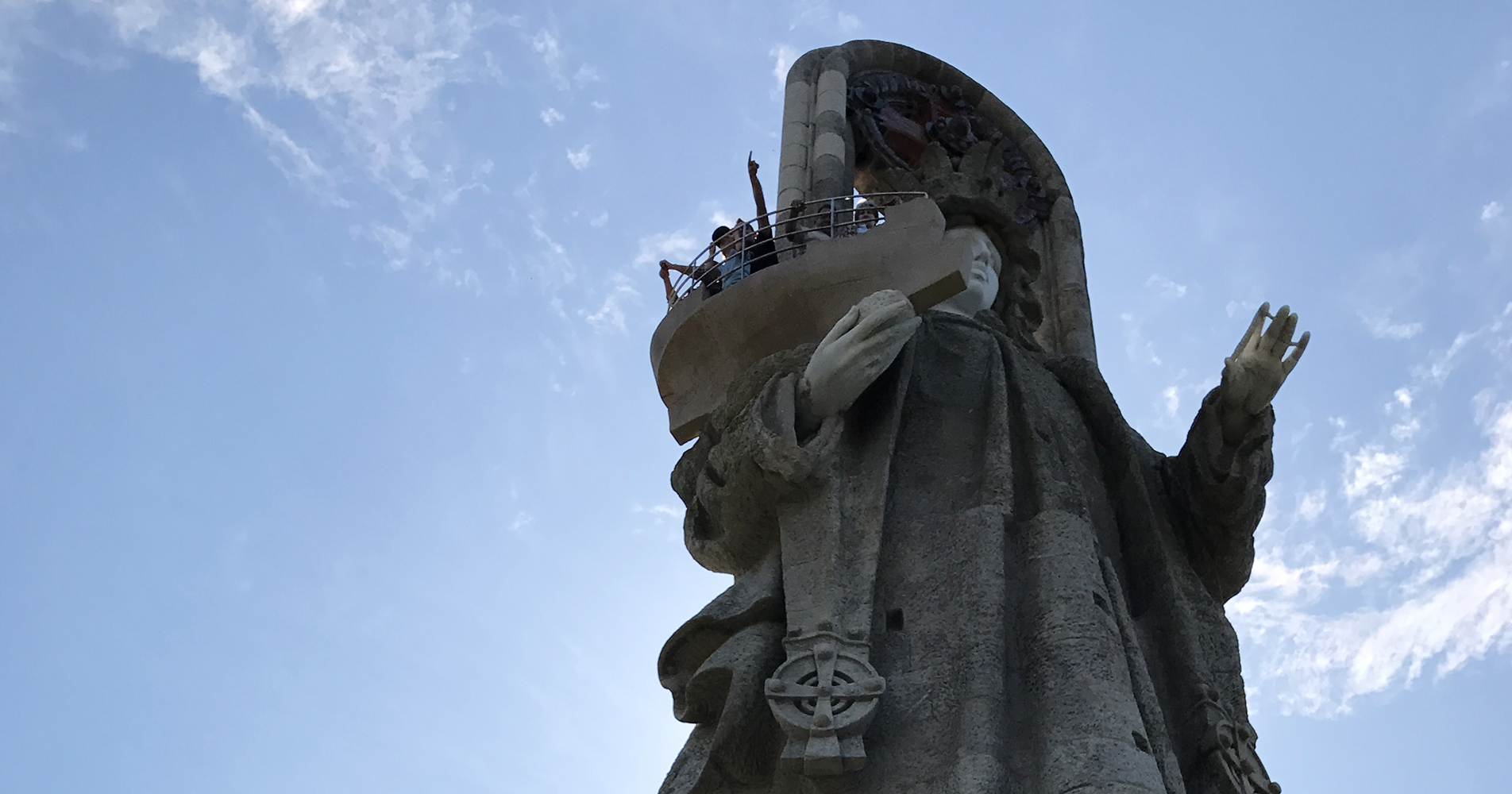 Baiona is not precisely a place lacking in attractions. Its castle, converted many years ago into a National Parador, reminds us that this was a town of great importance in the Middle Ages and in the Modern Era and a reproduction of one of Columbus’ caravels, La Pinta, permanently moored in the port, reminds us that this was the first place in Europe that received news of the existence of the New World.

However, to the west of the town stands a much more modern monument that should not be forgotten either: it is the Virxe da Rocha (Virgin of the Rock), a unique artificial lookout fifteen meters tall designed by who was probably the best Galician architect of the first half of the twentieth century, the Porriño native Antonio Palacios.

The Virxe da Rocha is an imposing stone sculpture that represents the Virgin Mary holding a boat in her right hand. The main appeal of the monument is that this boat can be accessed from inside the building, ascending a narrow spiral staircase. To do this you have to pay a symbolic entry fee and wait for your turn, since the way is unavoidably narrow. The wait is worth it, since from the boat you get a spectacular view of the estuaries of the south of Galicia, with the strip of sand from the beach of Ladeira to the right and, to the front, the sandbanks of the municipality of Nigrán and the Cies Islands. 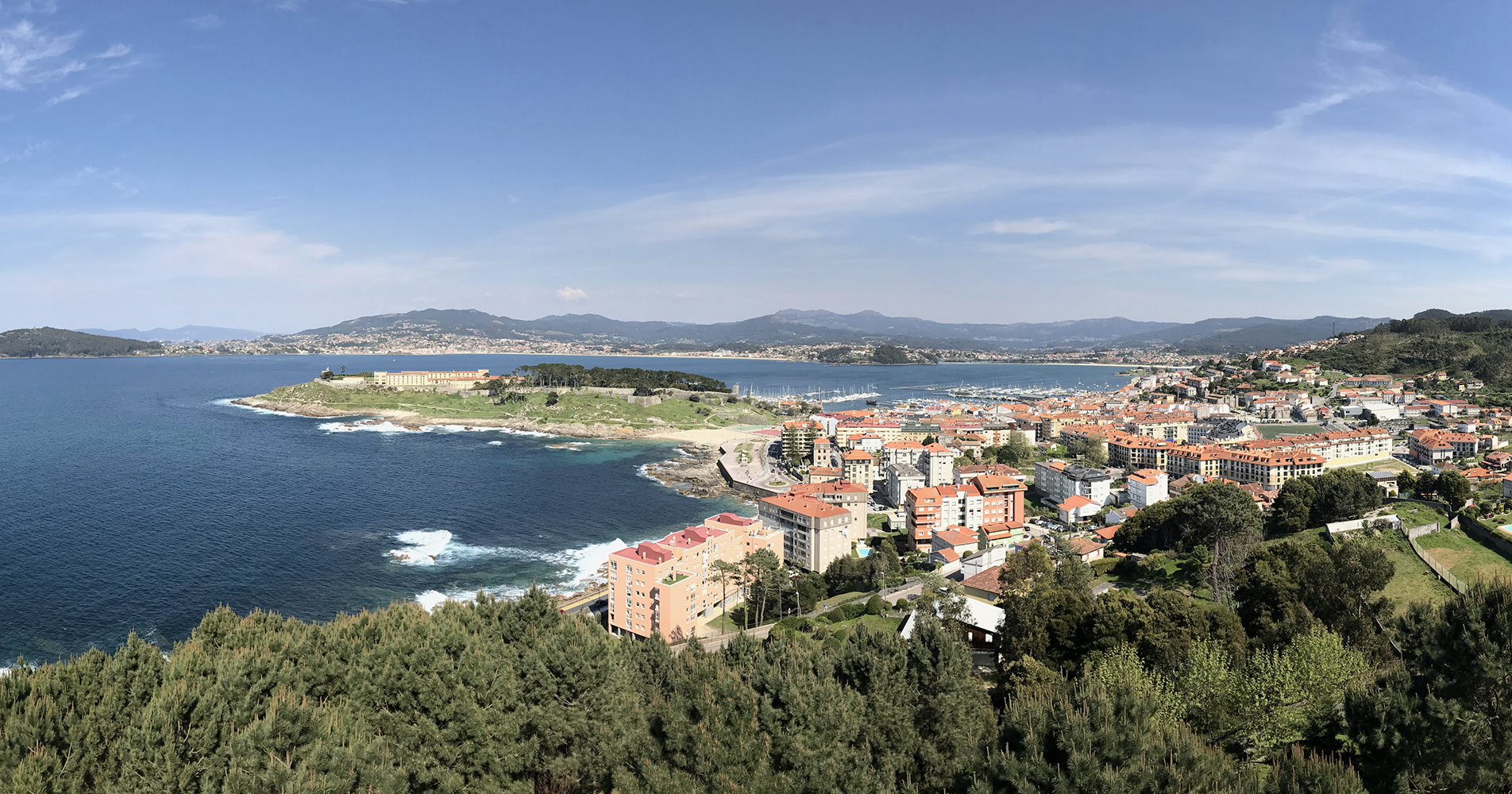 The sculpture-lookout was inaugurated in 1930. It was designed, as it was said before, by Antonio Palacios Ramilo (O Porriño, 1874-Madrid, 1945). A very prominent architect, first of a Viennese-inspired modernism and later of a regionalist style, he was the author of several important works in Galicia, such as the neighbouring Votive Temple of the Sea in Panxón, the town hall of his birth town or the García Barbón Theater in Vigo . But Palacios is remembered above all as one of the creators of the modern look of Madrid. From his designs came such emblematic buildings as the Town Hall of  Madrid, the Hospital de Maúdes, the Círculo de Bellas Artes or the headquarters of the Cervantes Institute. On a more popular level, he was the author of the classic rhombic logo of the Spanish capital’s underground.

The construction of the Virxe da Rocha was not without complications. Although the first stone was placed in 1910, the lack of money prevented it from opening for two decades. To finalize it, its promoters had to resort to popular subscriptions and even to the theatrical performance of a lyrical work in Madrid: the profits generated by ticket sales were allocated to the building. To the large granite structure designed by Palacios were added several details that accentuate the sense of balance of the piece: the face and hands of the Virgin are sculpted in white marble and are the work of artist Ángel García, while the crown is made out of ceramic material.

Any time of year  is good to climb the Virxe da Rocha de Baiona. Its moment of greatest turnout is probably the last Sunday of August, with the celebration of a pilgrimage in the area around it, where there is a picnic area with tables and stone benches. The Virgin is in a detour from the exit of Baiona towards A Guarda, and continuing up the access road you reach Monte da Groba, divider of a territory delimited by the bay of Baiona to the north, the Miño river to the south and the Atlantic Ocean to the west.