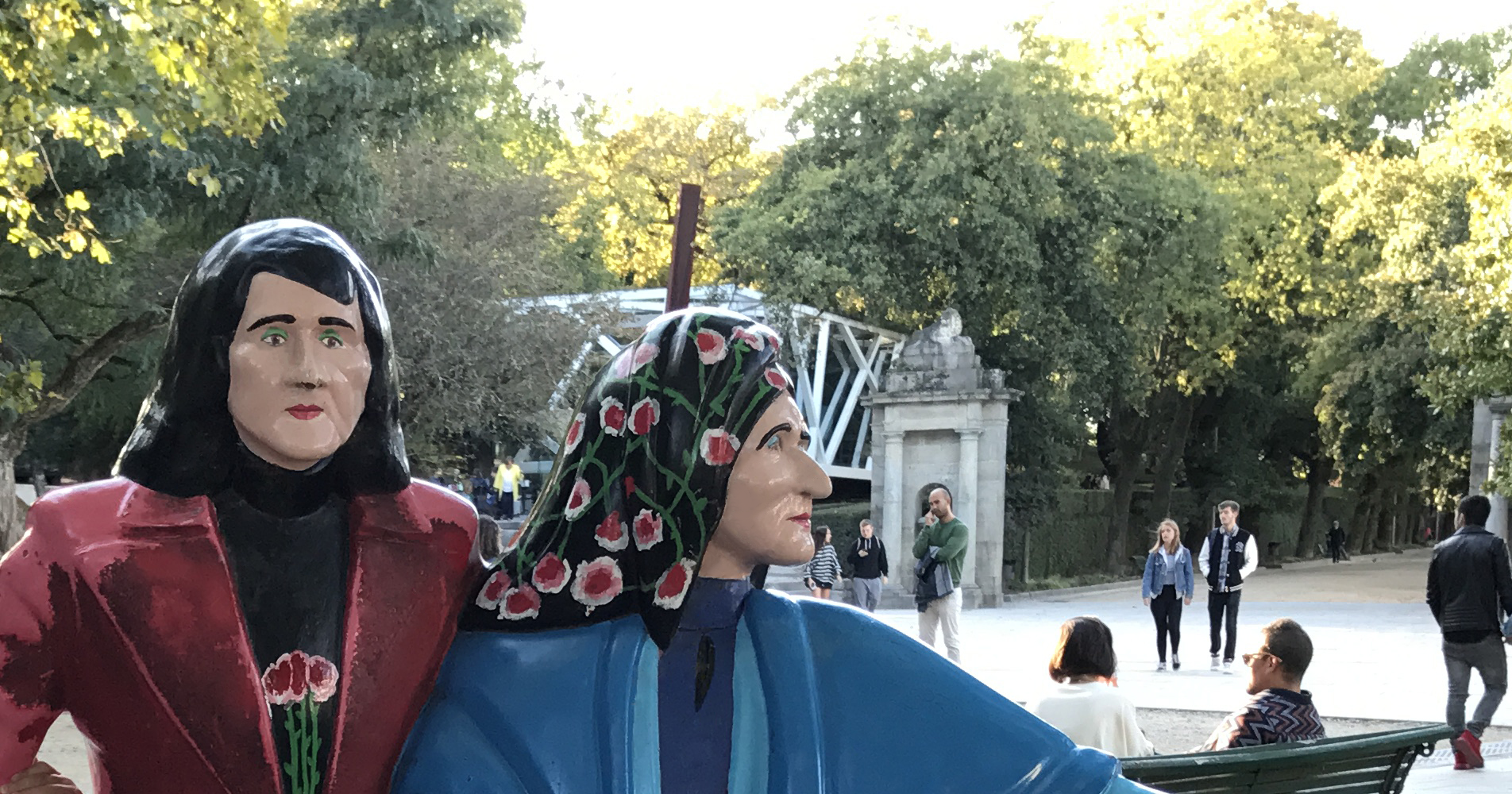 It is one of the most portrayed urban elements of Compostela and yet, not many people know its true history. Most visitors pose next to the statue of the ‘Marias’, in the central walk of the Alameda, a work that recalls two real and unforgettable figures that brought light, in their own way, to a city much grayer than it is now.

They were called Maruxa and Coralia Fandiño Ricart and everyone in Compostela in the middle part of the 20th century knew them as “the two o’clock”. Wearing brightly colored dresses and always extremely thin and impeccably made up, they walked every day through the old town. Both their flattery to university youngsters and their bad temper are proverbial. Maruxa, the youngest, always ready to pay a compliment and wink an eye; Coralia, the oldest, quietest and most measured. There are several establishments in the old town that still have images of these two figures who were part of the Santiago landscape for decades. The two died in the eighties and are buried in the cemetery of Boisaca.

But behind such extravagance hid a tragic story. Born in the early twentieth century, Maruxa and Coralia were two of the thirteen children of a cobbler and a seamstress of the Espíritu Santo street, north of the historic center. Three of their brothers were anarchist militants and after the outbreak of the Civil War, in July of 1936, the family was punished. Without work or support, they fell into a poverty in which they would live the rest of their lives.

It is said that the madness of the “two o’clock” appeared at that time, as a reaction to the terror and the grayness of the times. The sisters took refuge from sadness in their world of colored clothes and in their routine of urban passers-by. Soon they became part of the landscape of Compostela, a city that wanted to pay them back in solidarity the damage they had suffered. Maruxa and Coralia never asked for hand-outs, but there were many who helped them, like that grocer who gave them food by telling them they were “company promotions”; or the merchants who gave them outdated articles that would no longer be sold, so that they could always remain beautiful, suspended in time, as if in an eternal youth. In the 1970s, when a storm lifted the roof of their house of the Holy Spirit street, the neighbors raised the then astronomical figure of 250,000 pesetas to repair it.

The statue of the Marias, by César Lombera, was placed in the Alameda in 1994. It is inspired by one of the most reproduced photos of the couple: Maruxa extends her left arm, while Coralia, holding her sister’s arm, carries a closed umbrella she takes in anticipation of the eternal rains of Compostela. The dozens of people who take pictures of them are, perhaps unknowingly, paying tribute to the history of Compostela in the twentieth century, tragic and disturbing, yes, but also luminous and cheerful like the costumes that the Fandiño sisters liked to wear.