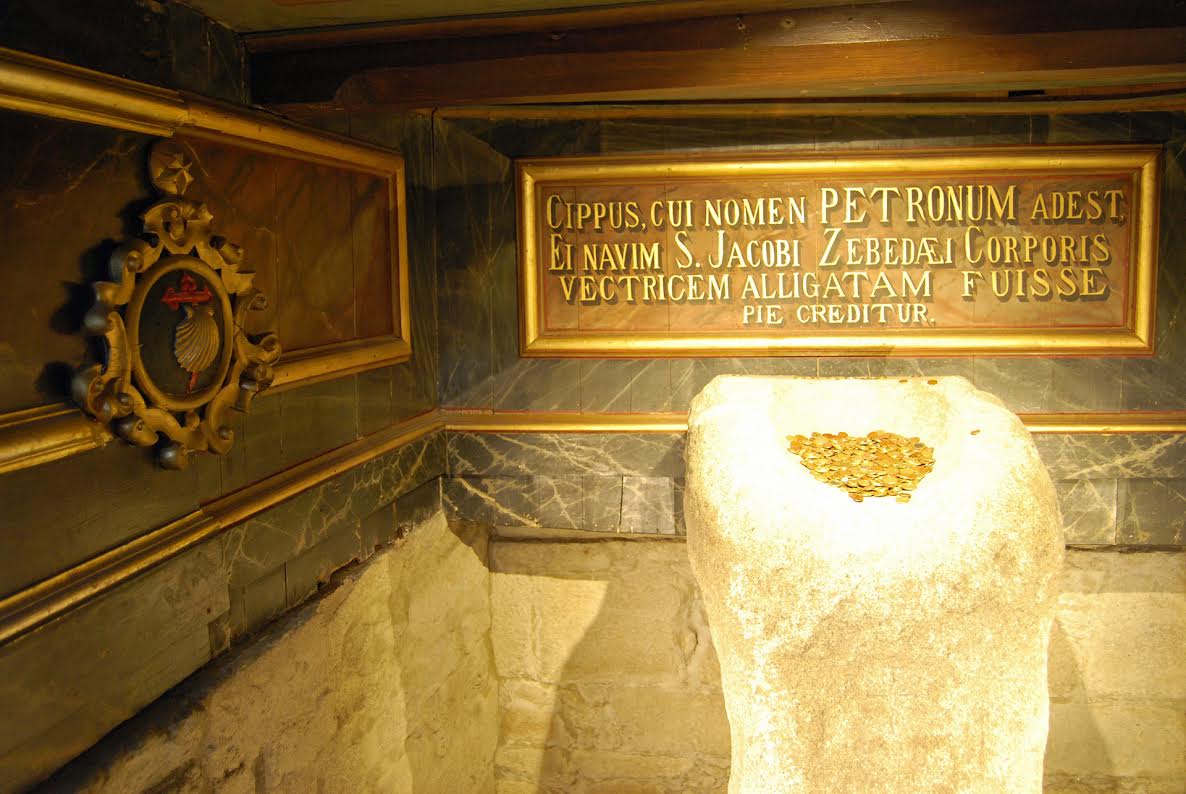 The history of the stone guarded in the church of Santiago in Padrón is one of those that are lost in time. Originally a Roman altarpiece, the Jacobean tradition links it with the traslatio, the arrival by sea of the Apostle’s body from Palestine to Galicia, stating that this was the stone in which the apostolic boat was moored when it landed.

The “pedrón” is, as its name already announces, a piece of carved granite of considerable size (it is 167 centimeters high) that originally served as an altar in ceremonies dedicated to the god Neptune. On its surface, the inscription NO ORI ESES D S P can be read, which the experts translate as “To Neptune with the contribution of the Irienses”, which leads them to confirm an invocation to the Roman god of the waters. Much later the rock was “christianized” with the addition of an engraved cross. It is also said that the piece could have been used again at some point as an element for mooring the boats that sailed up the Ulla river and later the Sar river from the Arousa estuary.

The Jacobean narrative gives this piece of rock, already relevant for its Roman past, an important role in the journey of the body of St. James from the coasts of Palestine to those of Galicia. According to the legend, Athanasius and Theodore, disciples of the Apostle, brought his remains by sea across the Mediterranean, traversing the columns of Hercules (the Strait of Gibraltar) and bordering the brave Atlantic coast of the Iberian Peninsula. The maritime traslatio, commemorated today along the estuary of Arousa with a via crucis built on natural islets, would end in Padrón, with the arrival of the boat to the port of Iria Flavia. There the ship would be tied to the “pedrón” and the body disembarked and brought to the hill of Libredón, in the present Compostela, where it would end up being buried and rediscovered eight centuries later by the hermit Paio. Interestingly, this fact would eventually cause the transfer of the bishopric of Iria Flavia to Santiago, delving into the comings and goings of history that have occurred between the two localities, separated by less than twenty kilometers.

The rock is today beneath the main altar of the church of Santiago, one of the most beautiful places of the small and well-kept old town of Padron. The temple has a medieval origin, although most of the current building is of subdued neoclassicism.

The location is certainly privileged: the main door looks towards the town’s narrow medieval streets and the building stands at one end of the Paseo del Espolón, on the bank of the river Sar, next to the old bridge that crosses it. It is worthwhile to cross the water course to approach the Carmen fountain, built in the 16th century and rebuilt in the 18th. Above the pipes you will find a beautiful carving on the apostolic trip with which, according to the legend, the Jacobean tradition began. Both for pilgrims who travel the Portuguese Way and for visitors who come to know Padrón, the stop is highly recommendable.