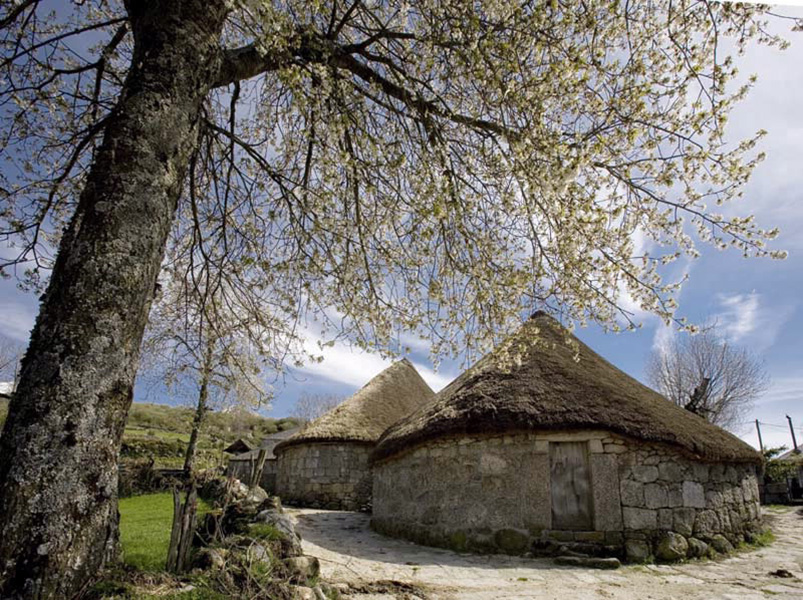 When we talk about the Serra dos Ancares it is impossible not to make a special mention of its pallozas. Do you know what we are talking about? They are old constructions of the zone in which, in spite of their reduced size, they were sheltered as much the cattle as their own owners.

They were conceived to survive the bad weather and the cold winter of Os Ancares, hence they were shared with the cattle. Both the heat of the fire and that of the animals kept the whole room at a pleasant temperature.

We are talking about ancestral circular constructions that evolved into oval and rectangular ones, probably to better adapt to the unevenness of the terrain. However, these unevennesses of the ground, were used to make divisions in the house or even for the exit of sewage.

As for the construction details, the stone walls had hardly any windows. One or two were enough to maintain adequate ventilation. In the same way, the roof, made of rye straw, allowed the fumes of the “lareira” to filter between the straws and the wooden structure that supports it.

This part of the house, it’s the most fragile. And although the straw is no more than 50 centimetres thick, the conical or pyramidal shape of the straw ensures that rain and snow do not accumulate on the roof. Avoiding this way, possible collapses.

Today, there are still some pallozas in different villages of Os Ancares. The most important ensembles can be found in Piornedo, O Cebreiro or Vilarello, among others. In particular, in the village of Piornedo we can enjoy a guided tour of its museum pallozas. Situated at an altitude of more than 1,000 metres, this ancestral village awaits fourteen pallozas of stone and vegetal roofs that take visitors back to another era.

In short, there is no doubt that the pallozas are a sample of traditional architecture that must endure over time. They are an example of a lifestyle characterised by isolation and harshness, and although they have little to do with the current way of life, they are a clear symbol of the most rural Galicia.

Get close to the Serra dos Ancares and don’t miss the opportunity to see them up close. It’s a great plan!