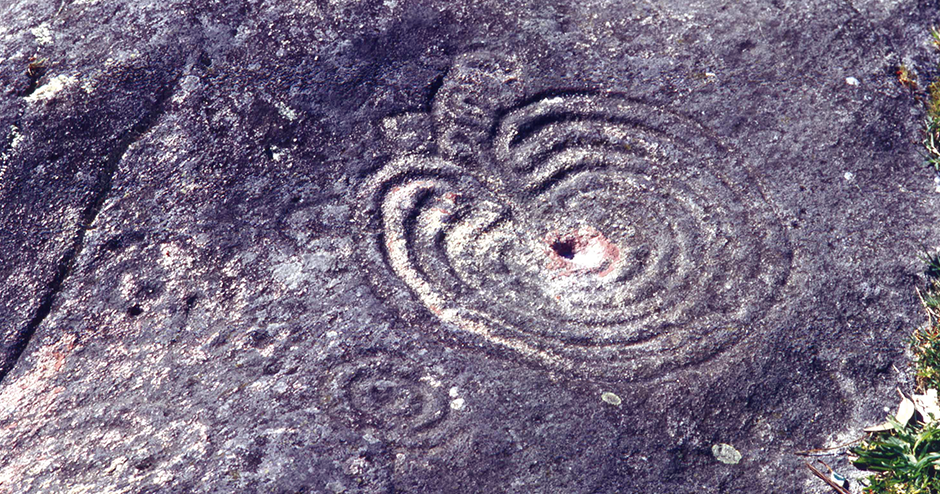 Living up to its name, O Morrazo is a long strip of land that sinks into the waters of the Atlantic Ocean. This region of the Pontevedra province holds several of the most beautiful beaches in Galicia and towns of enormous historical significance. About 100,000 people populate the peninsula, spread between the municipalities of Cangas, Moaña, Bueu and Marín, the first two facing towards the Vigo estuary and the last two towards the Pontevedra one.

O Morrazo is also a land of prehistoric heritage. It contains all the petroglyph typologies of the Atlantic style: from circular compositions to depictions of deer, labyrinths or even engravings in which designs of hunting weapons can be seen.

Among the most important ones are those of the Mogor beach, in Marín. It is made up of three sets of works carved into rocks, the Pedra do Labirinto, the Os Campiños and the Laxe dos Mouros. On them one can clearly identify labyrinth-shaped designs, forms that trace back to a common past between the peoples who lived in this area in the three millennia before Christ and those who lived in regions as far away as Syria at the same time.

The Morgor petroglyphs are estimated to be between three and five thousand years old, and are not by far the only prehistoric attractions of the municipality. In Marín there are numerous dolmens, forts and stelae that speak to a very lively past. In recent times there have been attempts to recover at least part of this heritage, ever-present in the southern area of ​​the Galician Community.

It is difficult to determine nowadays what the purpose of these engravings was. The truth is that they are almost always located outside villages and in places that were once natural paths from one village to another, along roads travelled over centuries and, also, at strategic surveillance points. This is the case of the Mogor petroglyphs. From the carved rocks you can enjoy a beautiful view of the Pontevedra estuary, with the beach that gives them their name in the foreground. The time of scanning the horizon in search of enemies is passed, now it’s time to enjoy the view and perhaps, afterwards, go down to the sand for a refreshing bath.

Because one of the most interesting features of this place for the traveller is its location, a few metres from the sea and in one of the most popular beach areas surrounding the city of Pontevedra. In the summer months, sandy ​​Mogor and its neighbours Aguete and Portocelo welcome numerous residents from the province capital who arrive by bus, a line still known today as a “trolley”, because of the old trolleybus. There is also an even more appealing way to access this trio of unique beaches with well-equipped hotel services: using the old coastal road, now converted into a lane specially designed for cyclists, which starts behind another one of the places that makes Marín renowned throughout Spain: the Naval Military School.