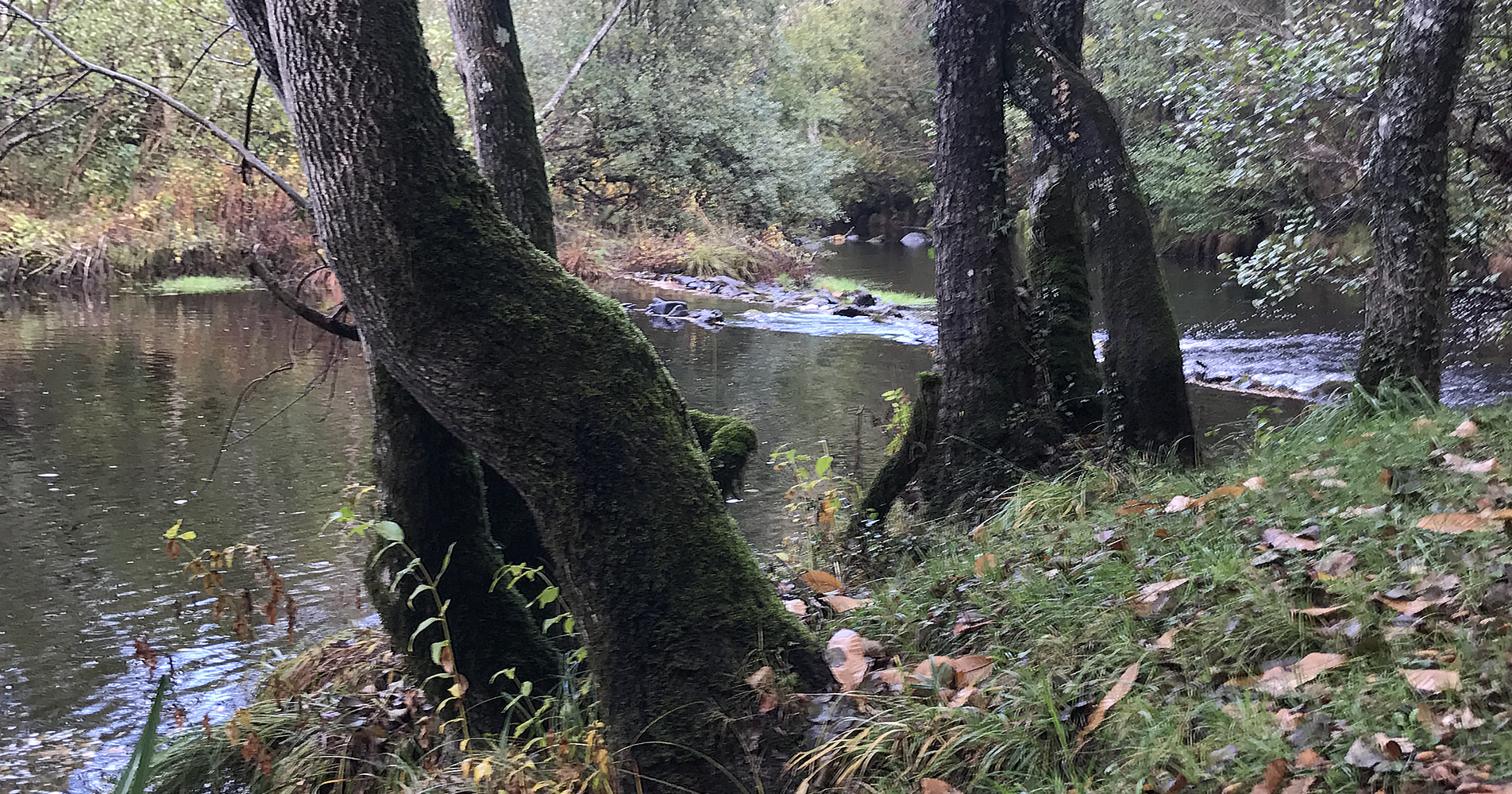 The Arnego River is one of those small watercourses that made Galicia the country of the thousand rivers, as the poet called it. It is born in the heights of the Serra do Faro in the Pena de Francia of Dozón, where legend says that the Visigothic king Witiza was born. From there, it quickly descends flowing north, leaving the town of Lalín to the left, to die a few kilometres further on the Ulla river, in the middle of the Portodemouros dam. It is a wild river, like most of those located in this area of ​​central Galicia, because it makes its journey in just a breath and most of the year full of water struggling to break through rock walls.

The Arnego keeps in its final section a secret that any curious traveller will like to see: in the middle of the galician interior, a forest with many species more typical of climates such as the Mediterranean.

This area is called Sobreirais do Arnego, cork oaks of the Arnego, precisely because of the species that distinguishes it: the cork oak, that tree of the oak family that is characterized by the quality of its cork. This is used for a multitude of products, from bottle lids to the manufacture of craft products. The temperature, warm throughout most of the year, allowed this species to thrive in this forest, one of the few areas of Galicia where cork oaks can be found in significant quantities and in many cases large specimens with many years of existence. There are places in the province of Ourense or surroundings the Ribeira Sacra where you can also see them. In fact, in the southern area of ​​Galicia there were some good reserves of this tree at one time, since the very Cadastre of Ensenada, from the mid-eighteenth century, assures that in the villages at the mouth of the Miño there were forests dedicated to the production of cork that would later be used in devices as essential to sailors’ day-to-day life as fishing buoys. However, nowadays, the Sobreirais do Arnego, with more than 1,500 hectares, are unique.

Another one of the species more inherent to the south that can be found here is the érbedo (Arbutus unedo or strawberry tree), with its unmistakable red berries. Of course there are also species more widespread in the Community, such as oaks, chestnuts and alders, growing here, constituting a magnificent example of riverside forest declared Site of Community Importance integrated into the Natura 2000 Network, which gives it special protection.

The cork oaks extend through the municipalities of Lalín, Vila de Cruces and Agolada, especially the latter. To get to them there are several easy hiking trails to take. The most daring can try to traverse part of the Arnego in canoe, although for this it is necessary to be an experienced wild waters canoeist: in winter the river runs a lot of force and, in some stretches, forms small canyons, spectacular to watch and difficult to navigate. The Sobreiral is also a very popular place for those who practice sport fishing.