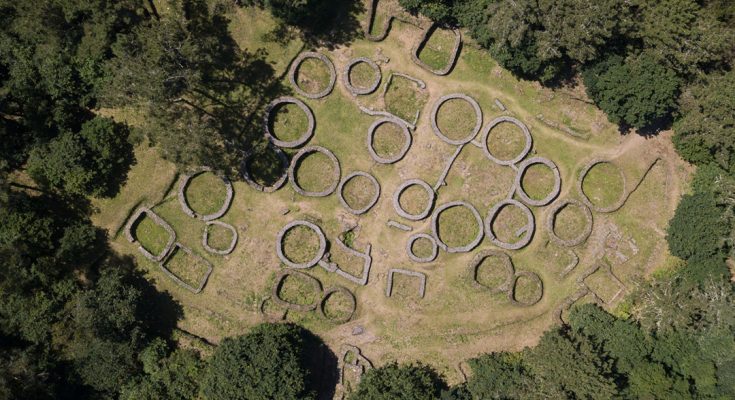 The castros appear in the peninsular northwest in the passage from the Bronze Age to the Iron Age, and would still continue later, in a Galician-Roman coexistence. In Galicia we have more than 2.000 castros, that we know of, of course. The oldest are those of the Rías Baixas.

These fortified settlements are located in strategic places, with appropriate natural conditions for defense. There are them in the interior, on top of small hills or on the slopes of higher mountains, and also on the coast, taking advantage of ledges in the sea. The towns have several walls and moats, terraces and a central “croa”, where the houses, ovens, warehouses… Many have antecastros, with cultivation and grazing areas. With Romanization, the population descends from these settlements and occupy the valleys.

One of the largest and best preserved sites is that of Santa Trega, in A Guarda. It is on Mount Santa Trega, at an altitude of 341 m, from where we have dizzying views of the mouth of the Miño. It seems that he had a continuous occupation between 1st century BC and 1st century AD; however, the area was already an inhabited place, as there are petroglyphs from 2.000 years before. The first excavations date back to 1914. The remains that were collected (sickles, hooves, amphorae, coins…) testify to the textile, commercial and agricultural activity. The entire collection of pieces is in the Museo Arqueolóxico do Monte, opened in 1953 in a building by Antonio Palacios.

Another castro on a mountain site with views of the sea is that of O Facho de Donón, in Cangas, in the province of Pontevedra as well. Populated between the 4th century BC and the 2nd century AD. Part of the walls, the moat, and stones of the houses are preserved. The most singular are the more than 160 altars that appeared in the same area. They are from Roman times and, due to the inscriptions they present, it is thought that they were used as votive offerings dedicated to the Roman lar god Berobreus. His sanctuary must have been here, which was a pilgrimage center until the 3rd century. And, beyond: the Atlantic, the Cíes and Ons.

Coming down from the mountains, we have an example of a coastal fort in A Lanzada, in Noalla, where the famous bench is, in the Sanxenxo council. It is located on a peninsula, near the remains of A Torre da Lanzada, a medieval fortress. The chapel of Nosa María da Lanzada was built on part of the settlement. Archaeological excavations have revealed the importance of this castro as a commercial enclave in Roman and Sueva times. Mediterranean goods arrived here and were distributed through the Rías Baixas. In addition, among the remains, there is a necropolis and a pre-Roman salting factory. The pieces found (ceramics, tools, etc.) are in the Pontevedra Museum.

One of the best known castros is also on the seashore. It is the one in Baroña, in O Porto do Son, in A Coruña. It occupies a rocky peninsula called Punta do Castro, at the outlet of the Muros y Noia estuary. These Galicians knew where to settle: good views, next to the beach… The first excavations date back to 1933. Over time, they brought to light a settlement made up of four areas separated by walls, 20 circular and elongated houses, the main wall, stairs in very good condition and remains of defensive walls, moats and ovens.

Continuing in the province of A Coruña we can approach the castro of Elviña, one of the largest in Galicia. It is to the south of the capital, in San Vicenzo de Elviña, on a hill well connected by sea, estuary and land. It was a settlement populated for a long time and constantly reformed. It has three fortified enclosures and curious spaces, such as the Exedra House, the Covered Fountain, the Cistern, the Phallic Temple or the Treasure House, in which the Treasure of Elviña was found hidden, one of the most important ensembles of castro goldsmiths in the northwest of the peninsula. The pieces collected at the site can be seen in the Archaeological and Historical Museum of the Castelo de San Antón, where there are also materials found in the Castro de Borneiro, located in Cabanas de Bergantiños.

And if the one in Elviña is great, the one in Sao Cibrao das Las is not short. It is between the municipalities of San Amaro and Punxín, in the province of Ourense, at the intersection of the Miño and Barbatiño rivers. It was inhabited between 2nd century BC and the 2nd century AD, being representative of the final stage of the castro culture. It has two walled enclosures, moats and remains of houses. In 2014, the Parque Arqueolóxico da Cultura castrexa Lansbrica was inaugurated.

A little further south, in Celanova, we find the Castromao site, on the mount of the same name. He had a long presence in time, between the 5th century BC and the 2nd century AD. It has a wall of 485 m. From the top, in the “croa”, we have good views of As Terras de Celanova and A Baixa Limia. In the excavations figures, coins and unique pieces have been found, such as the famous openwork trisquel of Castromao. All this is in the Provincial Archaeological Museum of Ourense. In the vicinity of the settlement, a village in the neighborhood of A Tábula de Castromao has been recreated.

A Terra Chá, in Lugo, is an area full of archaeological remains, with a toponymy that speaks for itself. One of the best examples, in Castro de Rei, is the Viladonga deposit. The transformations of the settlement speak to us of an occupation between the 3rd century BC and the 5th century AD, of great importance in the 2nd and 5th centuries. It is an example of the evolution of the castros and the countryside in the Roman period. Excavations began in 1971. In 1983, the MEC created the Castro de Viladonga Museum, which has been managed by the Xunta since 1990.