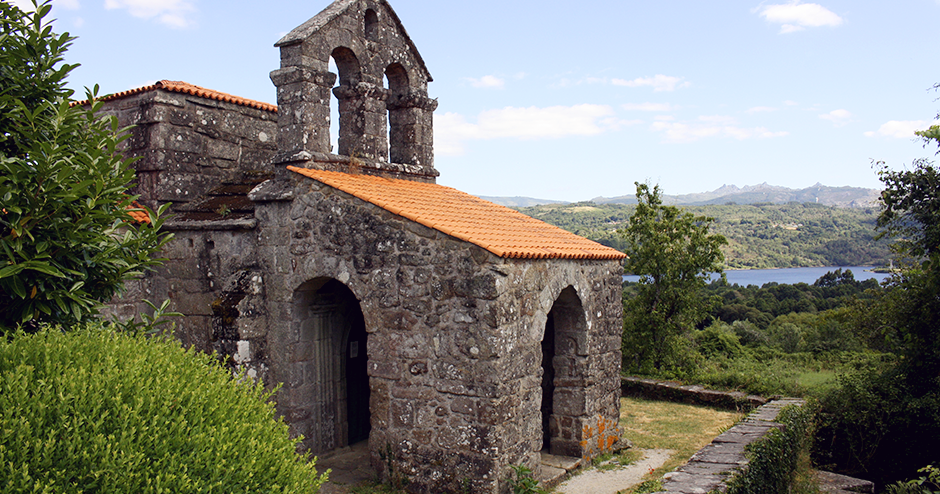 Is Santa Comba de Bande the oldest church in Galicia? The question is difficult to answer, but this small building, located in the province of Ourense, is undoubtedly  one of the oldest Christian temples of the Autonomous Community.

The temple has its roots in the seventh century (although it might have been built on top of a previous one), it is a great example of the Visigothic style and was abandoned after the Muslim conquest of Hispania. Towards the end of the ninth century it was repaired (it is odd to think of a restoration over a millennium old) and looked very similar to how it does today. It is surprising to know that it was created as part of a monastery that housed both nuns and friars, since its size is, seen from today’s perspective, very modest. Shaped like a Greek cross, the main nave, with a square floor plan, opens to the outside through some small windows and is accessed through a horseshoe arch supported by marble columns. It is likely that they come from a previous Roman temple and are one more example of reused elements of the past in this unique building: the capitals are also from the late Roman period, while one of the side chapels retains an altar of that same era.

The centuries have left their mark on Santa Comba de Bande. In the apse you can see spectacular paintings dating back to the sixteenth century, almost a thousand years after the original work was started. A starry sky, a crucifixion, angels and saints, they all seem to fall upon the visitor’s head in an area of barely four square meters, illuminated through a marble lattice. On one side of the church’s interior you can see the stone sarcophagus that for centuries, it is said, held the remains of San Torcuato, apparently relocated to the monastery of Celanova back in the day. On the exterior is another sign of the passage of time: in the seventeenth century the façade was renovated to add a porch made of thick masonry walls.

The church is dedicated to the legendary Columba of Sens, a saint venerated throughout Europe under the names of Comba, Columba, Kolumba or Coloma. According to tradition, she was born in Roman Gallaecia around the middle of the third century and fled to Gaul escaping from imperial persecutions against Christians. She was rescued by a prison bear and then burned at the stake and had her throat slit in Sens, where an imposing abbey was built and that later crumbled during the French Revolution. In this historical period the relics attributed to the Galician girl, worshiped in her place of birth, disappeared. Great devotion is professed to her in its native land. Her Catholic holiday is celebrated on December 31.

A visit to Santa Comba de Bande is a good excuse to get to know the historical heritage of the area. Very close to the temple, by the river, is the Roman site of Aquis Querquennis, which holds  the remains of a huge Roman camp, wonderfully preserved. The archaeological excavations interpretation center is very useful to learn the importance that the area held in the imperial era.