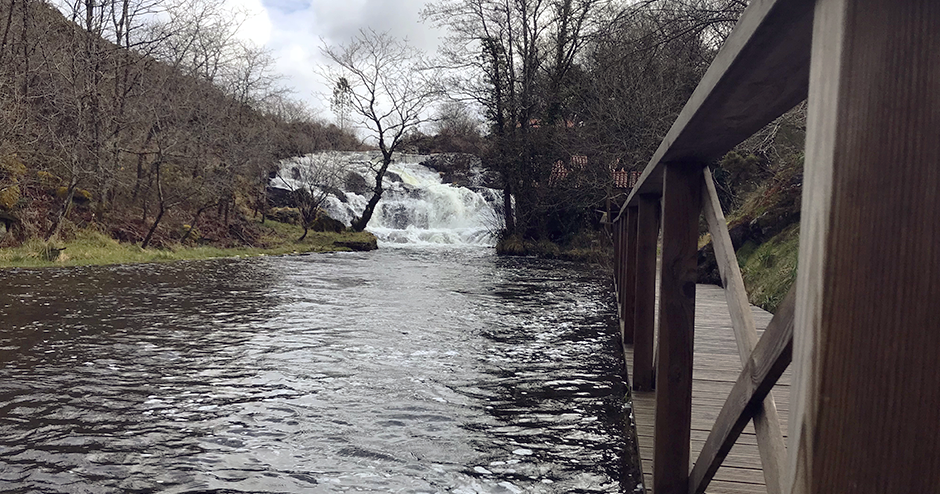 In the country of the thousand rivers there are places like this, unimaguined, and fortunately well cared for so that everyone can enjoy them. The Mira river is a small tributary of the Xallas that crosses the municipality of Santa Comba, in the agrarian core of the province of A Coruña. At a given point within its short route, the stream widens and drops a few dozen meters creating the shape of a ladder, with the water bouncing between the rocks and then disappearing as it forms small brooks that end up joining together again to finally flow into the main river.

The spectacle is especially beautiful during the rainy season, as the Mira seems not to want to settle for its riverbed and makes an effort to overflow. The roar of the stream and the freshness of the water invite you to spend an afternoon watching the waterfall, which is certainly an easy thing, since its surroundings are perfectly cared for and designed for relaxing.

Wooden walkways, restored mills (with very interesting explanations regarding their ownership, which could be individual or communal depending on the case) and a picnic area are linked to the entry points, perfectly maintained, accessible through a wide dirt track suitable for any type of car. The eight kilometres it covers between Abelenda (Coristanco) and the Xallas, and the waters it draws from the Alcaian lagoon are enough for the Mira river to create a real natural treasure for all audiences.

The beauty and fertility of this area did not go unnoticed by the people who lived here for millennia. Beginning with its toponymy, in Castriz there are traces of a large castro (fortified village). In the municipality of Santa Comba there are more than a dozen of these old settlements dating back to the Iron Age, among them some as important as San Bartolomeu in O Busto. In addition, some historians support the theory that an important Roman communications route passed through the ​​Castriz area, and that large troops of the imperial army were once stationed in the area.

The Castriz waterfall is located in the industrious municipality of Santa Comba. Ten thousand people live in this place, where the main economic activity is livestock. The agricultural landscape, the undulating hills and the cattle grazing peacefully in the meadows contrast vividly with the fast paced lives in the streets of this town, the region’s administrative centre. The fairs held in the central boardwalks are among the most popular in all of Galicia, and there you can find all kinds of products, from food to clothing, footwear, agricultural machinery or furniture.

Nightlife has also historically been one of the town’s greater allures, attracting young people from all around every weekend. Nights are intense in Santa Comba, where several of the most popular pubs and discos in the region are located. With these ingredients (hospitality tradition, landscape and excellent livestock and homegrown products) it is easy to assume local gastronomy is impressive: the fact that there is a restaurant with a Michelin star (no small achievement) in town is proof of that.