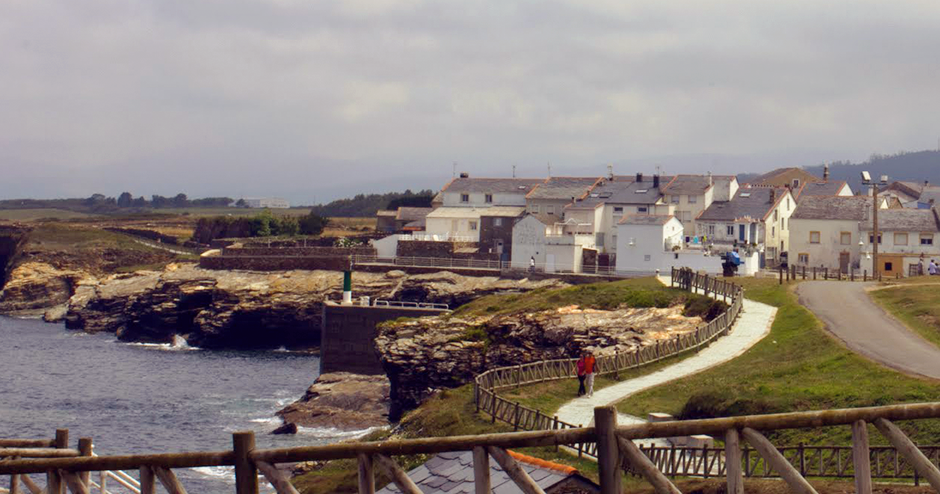 It is true that, going a little beyond always unfair clichés, Galicians are known throughout the world for being a very fearless people. However, few would associate Galicia with an activity that, when mentioned, reminds people of Moby Dick’s cold environments or Basque Country’s fiercest ports: whaling. And yet, dozens of people in the community were engaged in this industry half a century ago. Some towns, mainly along the Cantabrian coast, lived almost exclusively off whaling, and a few of them still look the same as they did back then.

This is the case of Rinlo, in the Ribadeo municipality. It is a small town suspended over a natural inlet of the sea, the Cove of Areosa, ideal for sheltering boats in days when the sea is too fierce, something that happens quite often in the area. Visiting the town in winter guarantees unparalleled views of the sea, beating the port wall and rising much higher than any of the village’s houses.

Between the Middle Ages and the eighteenth century, whale-hunting expeditions departed from Rinlo much as they did from nearby towns such as Foz, Burela, San Cibrao, Bares or, beyond and already into the Atlantic, Malpica and Caión. It was a very dangerous but also highly lucrative activity, since whale oil was a difficult product to obtain and, therefore, very expensive. The industry began a gradual decline in the nineteenth, finally becoming in the early twentieth.

Seafood breeding centres then gained importance in Rinlo as the main way to subsist. In 1904, a centre dedicated to breeding spider crab and lobster was opened, taking advantage of the sea’s continuous ins and outs in Rasa Cantábrica’s soft coast. The town prospered around these small factories, and the township has remained in much the same condition as it was at that time. The houses are mostly suspended over the roadstead’s eastern slope, while the port facilities are to the west. These are big houses, with strong walls, which showcases the good economic status their owners achieved thanks to profits obtained from the sea. The local Fishermen’s Guild is, by the way, one of the oldest in Spain.

At present, the small port continues to operate, and supplements another economic activity that has taken hold over the years: tourism. Mainly gastronomic, because every weekend Rinlo hosts dozens of people who come to eat at the various restaurants in the area. Barnacles, seafood or rice soup are among the dishes most requested by visitors.

Rinlo is very close to Ribadeo and to another one of the municipality’s great attractions, As Catedrais beach. The Natural Path of the Cantabrian Route links all these points in a long and very beautiful promenade that can be done by bike or on foot.