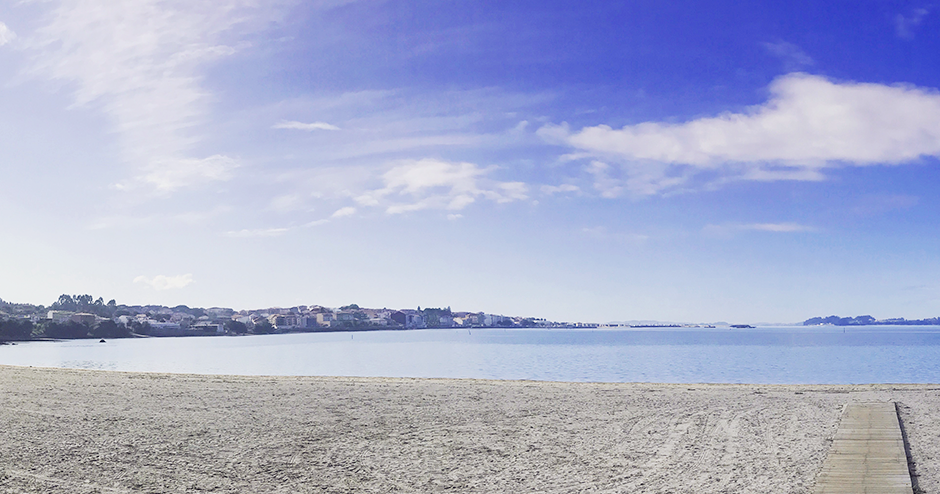 Rianxo is a very curious case. With currently some 12,000 inhabitants, several of the most important writers of Galician literature grew up in its medieval streets. The geographical route is so fascinating that it is well worth making a list of places to visit.

The first of them is, of course, its historical centre. The Pazo de Martelo, located next to the church of Santa Comba, is one of the town’s emblematic buildings. In this very same lot once stood the house of Paio Gómez Chariño (1225-1295), lord of the town, renowned member of the military during the battles between Christians and Muslims, representative of the Kingdom of Galicia… and distinguished troubadour of whom we know almost thirty cantigas (songs), most of them of romantic themes. The current building dates from the seventeenth century and Chariño never leaned over its phenomenal balustrade, but the place still holds great literary flavour. Much more so knowing that the square in which it is located is dedicated to Rafael Dieste (Rianxo, 1899-Compostela, 1981), who revamped Galician literature at the beginning of the twentieth century. Dieste broke away from the prevailing ruralism and wrote fiction and theatre, also in Spanish. He spent a good part of his life in exile during the Franco regime. “When I was a child, one day, I believe at half past ten in the morning, a whale arrived at Rianxo. Some, to detract from our town’s merit, say it was a very small whale, a calf. Gossip, envy, they do not know what they speak of”, he recalled in his book Dos arquivos do trasno  (“From the archives of the fairy”).

Dieste was born in the Rúa de Abaixo, which can be considered the starting point of Galician literature. In this same street, very close to the sea, Alfonso Daniel Rodríguez Castelao (Rianxo, 1886-Buenos Aires, 1950) was born. Cartoonist of overflowing talent and humour, literary lover of miniature and precision, and a political activist, he was the founder of the magazine Nós (“Us”), deputy in the Republic and leader of the Galician nationalists. Many of his works are considered essencial, such as Os vellos non deben de namorarse, Os dous de Sempre or Sempre en Galiza.

Another writer of enormous importance born in the Rua de Abaixo was Manuel Antonio Pérez Sánchez (1900-1930), known as an author by his first name, Manuel Antonio. His book De catro a catro (“From four to four”) is considered a milestone in poetic production in Galician, a delightful portrayal of the seafaring life he himself practiced, full of grace and symbolism. Manuel Antonio passed away at a very young age, at 29, in the Asados parish, where a plaque near the church identifies his family house.

Also outside the historic center, in Taragoña, pioneering Xosé María Brea Segade (1904-1934) was born. Of the same generation as Dieste and Manuel Antonio, his poetry was published posthumously and a bust commemorates him in the Paseo da Ribeira, along with Rosalía de Castro (1837-1885). There must be something about the ​​Rianxo sea to have produced so many and such good writers throughout the centuries…