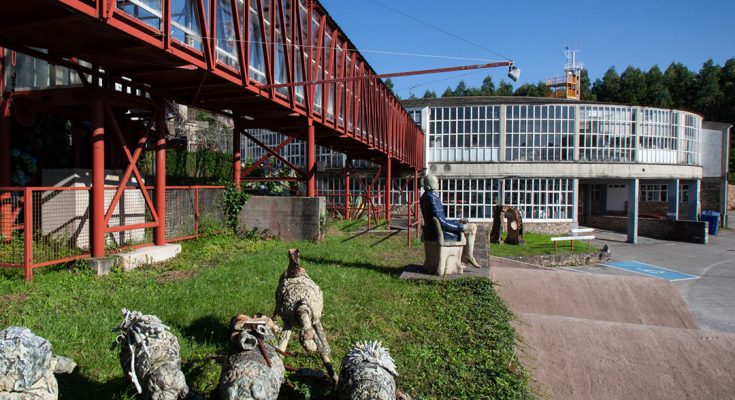 Years ago we associated tourism with beaches, monuments, and little else. Today we are talking about rural, gastronomic, oenological, nature, adventure, health and wellbeing, religious, sports, astronomical tourism… One of the booming categories is industrial tourism.

One of its objectives is to protect industrial heritage, hence it is also related to industrial archeology (we have categories for everything), the one that studies the spaces and machines used by industry, and the characteristics of the social groups that they come from. Thus, beyond an aesthetic or functional interest, it opens us to the knowledge of local histories.

In many cases, it represents an opportunity for the reconversion of inactive areas that were important in the past. At other times, it brings us closer to fully operational factories. In Galicia, the main factories revolve around the world of the sea (canneries, salting industry, shipbuilding), although there are also mining, electrical, or ceramics, for example.

Ferrolterra is one of the leading regions in this type of tourism. We can do the Route of naval construction, with the option of a boat ride along the estuary. The key stops on the route are: the Military Arsenal, an impressive 18th century shipyard and naval base complex, where the Naval Construction Museum and the Exponav Naval Museum are also located; the Navantia facilities, public shipyards in Ferrol and Fene dedicated to the construction and repair of large ships and offshore wind projects; the castle of San Felipe, an example of a bastioned battery from the 18th century.

On the other hand, the main canneries in the area can be explored by following the Canning Route, with stops at La Pureza, Cariño, or Mar de Ardora, in Ortigueira, for example.

Also in the region we have the As Pontes mining complex. Here «As Pontes Industrial Experience» was born, with the function of preserving the local industrial heritage around the thermal power plant. Let us remember that in 2012 the extraction of coal stopped and the largest open-pit lignite mine in Spain was turned into a huge artificial lake. We see in the area how everything revolved around the Central, with towns like As Veigas, exclusively for people employed in the factory, since in its best days more than five thousand people came to the municipality, and somewhere they had to live.

The Fervenza do Ézaro complex, in Dumbría, on the Costa da Morte, with the old hydroelectric plant, is in quite ideal surroundings, with a waterfall, Mount Pindo, the nearby beach and a wonderful viewpoint. In addition, it has the Museum of Electricity.

Already in the Rías Baixas, the canning, salting and cetarea industries have a lot of presence. One of the most outstanding destinations is the Massó Museum, standing since 1932, installed in the warehouses of the old Massó Hermanos canning company, near the port of Bueu. The old cannery and whaling factory is located in Cangas, in a state of abandonment. Related to the theme, there are also the Salgadeiras de Moreiras, in O Grove, where the fish salting factory of the 18th and 19th centuries has been recovered for tourism, and which is completed with a museum space.

In Vigo, the traditional capital of the industry in Galicia, we have the possibility of sailing on a catamaran through the estuary, knowing all the past and present of «Fishing Vigo».

In the province of Lugo we also have exponents of industrial tourism such as the A Pontenova furnaces, dedicated to the extraction of iron and limonite. The set presents five large chimneys from the early twentieth century, built, by the way, with bricks made in the Sargadelos factory. In its time, it was an engine for the economy of the area, even a railway line started from here to Ribadeo for the distribution of the product. Today there is a route that runs along the tracks of the wagons that went down to the furnaces, between tunnels and open mines.

And, since we have talked about Sargadelos, we have to say that it is another factory that can be visited. And in duplicate, since the ceramics are made in Cervo, in Lugo’s Mariña, and in O Castro, in Sada. Its origin dates back to the factory built in Cervo in 1806. At first, it was dedicated to the iron and steel industry and, later, as a pottery factory, taking advantage of the kaolin from the area. The old golden age passed in the middle of the 19th century. Already in the 20th century, in the 60s, years after founding ceramics O Castro in Sada, it was recovered by Isaac Díaz Pardo and promoted by personalities such as Luis Seoane, becoming a symbol of the Galician.

Another formula for reconversion of old industries, in addition to making interpretation centers or museums, is to dedicate them to rural accommodation. For example, in Allariz, on the banks of the Arnoia River, there is the old Tannery Factory of the Nogueira family, with accommodation and the Leather Museum. The surrounding area has been transformed into an Ethnographic Park.

In Galicia, industrial tourism started late in relation to other parts of the peninsula or the rest of Europe, but it is a sector that continues to grow. Just look at recent proposals such as Mega, Estrella Galicia, for example. Or the wine tourism experiences offered by the wineries of the different Denominations of Origin of Wine in Galicia. In addition, it is very easy to combine with gastronomic, artistic experiences… or any other type.