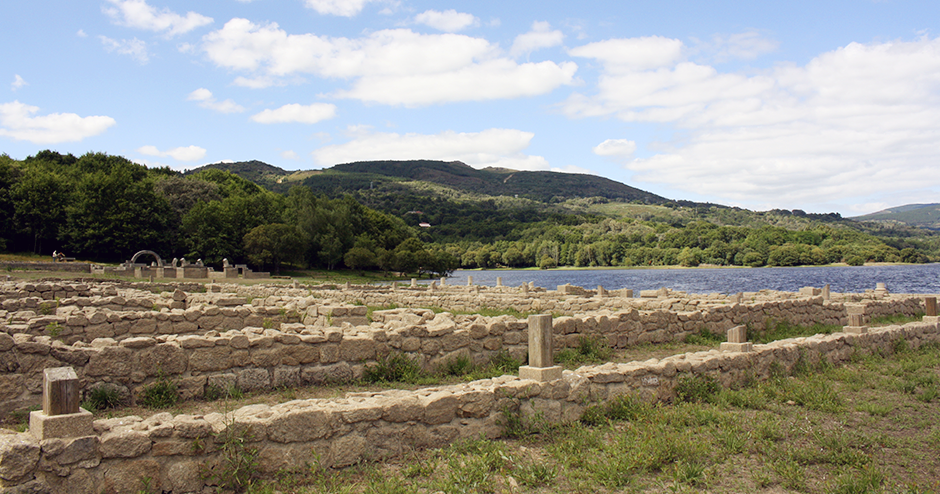 It looks like a vintage movie set, but it is not: the Aquis Querquennis camp is one of the best preserved Roman military establishments. It is located in the municipality of Bande, on the banks of the Limia River, and today it sits by the dammed water of the As Conchas dam, which means that part of the establishment is flooded during some months of the year.

The camp is structured with all the military genius of the Romans, who managed to control during centuries the European continent and a good part of Asia and Africa for good reason. We are referring to an enclosure of rectangular shape and two and a half hectares in size, perfectly divided by streets so that each estate within the imperial army knew what to expect. Some 500 soldiers must have lived there. The excavations clearly differentiate the area occupied by the barracks of the legionaries (strigium), each with space for approximately eighty soldiers. Similar in design in each case, they revolve around a central courtyard and have areas of different sizes for commanders and plain troops.

Aquis Querquennis also had a main barracks and a hospital where the wounded and sick among the troops were healed, in the crude way of the time. In order to survive inside, the Romans stored large quantities of grain in two hórreos, and to maintain essential hygiene they built baths to clean themselves. One can also appreciate the circular plan of other basic, day-to-day buildings: the ovens for baking bread, staple  imperial army nourishment. The plan is completed with the channels to collect sewage waters..

The ensemble was surrounded by a thick wall with entrances on each side, doors that, now rebuilt, evidence the importance of the area. It was none too common for the Empire to build this type of permanent installations, which showcases how important it must have been to protect the river and the Via Nova, which connected Bracara Augusta (Braga, in Portugal) and Asturica Augusta ( Astorga, in León). The amount of legionaries Aquis Querquennis could house speaks to the difficulties they must have had controlling a rugged terrain full of mountains and most likely with some locals not too open to Roman rule. The camp was built in the first century of the Christian era, Vespasian being the emperor, and was abandoned half a century later. According to archaeologists, the Legionary Cohort III of the VII Legion then relocated from Gallaecia to Dacia, in Romania, leaving the facility empty.

To better understand how legionaries lived in Aquis Querquennis, the site has a modern interpretation centre nearby. This installation houses a permanent collection which explains in detail what the Romanization in Galicia was like, including the famous episode occurred in this very same Limia river, known by the Romans as the “river of oblivion”. According to legend, its commander, Decimus Junius Brutus, had to cross the stream first and then call  the soldiers one by one to show them that crossing the Limia did not mean losing one’s memories forever.