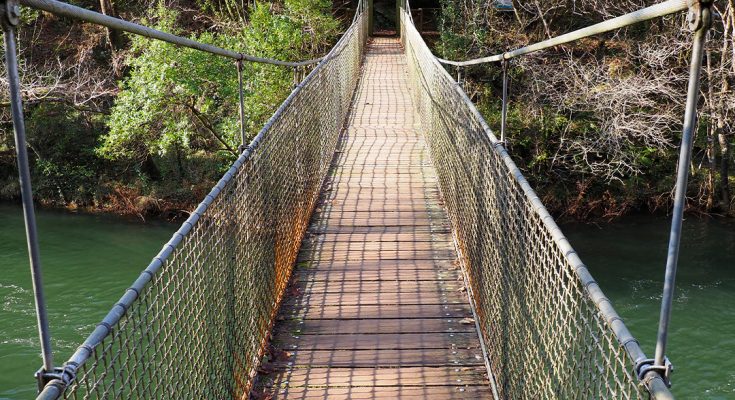 Among all the types of bridges, suspension ones are the most fun. Here we refer to the pedestrian walkways over rivers, which take us to the other shore in an adventurous way and make us feel closer to nature, since they are normally in areas surrounded by trees and fresh air.

For example, in Parque Natural das Fragas do Eume, this famous coastal Atlantic forest, there are two suspension bridges. Almost symbolic, as they connect the paved area with the most jungle and mysterious. One of the busiest routes, the Camiño dos Encomendeiros, leaves from the Cal Grande suspension bridge, near a fishermen’s refuge. Upstream, we find the Fornelos bridge, which is often taken as a shortcut, thus saving 3 km of this route. The path takes us along the riverbank to the Caaveiro monastery. The two bridges are the same, with a fairly solid structure.

The Leiro Bridge, from the 1960s, is made of iron painted white. It crosses the Avia River. Crossing the footbridge, we leave the town center to a recreational area known as O Salgueiral, a giant garden of willows, near the river beach. The route between Pazos de Arenteiro and Ribadavia passes over the bridge, also on the way to the monastery of San Clodio, the medieval bridge and the area’s vineyards.

Also from the 1960s is the Xirimbao bridge, or A Mariola, in A Estrada. It may be the longest hanging walkway in Galicia, with 80 m. It is also quite tall. The structure is metallic, with thick steel cables and a mesh floor, so that you can see the river under your feet. It was designed for salmon fishing in the Ulla. In fact, the fishing season conditions its opening to the public, between May and September. This bridge unites many things at the same time: the municipalities of Teo and A Estrada, the provinces of A Coruña and Pontevedra and the Ximonde and Xirimbao fishing reserves. On both banks there are recreational areas to spend time.

The Calvelo bridge, over the Lérez river, in Cercedo-Cotobade, is not that long, it measures about 30 m, but it is quite high. It is made of fixed wooden boards and large steel braces. It communicates Tenorio, in Calvelo, with Santo André de Xeve. From the top of the walkway you can see small waterfalls; below, there is an old stone mill half hidden. Arriving at Calvelo, we can have a snack at the table area and take a swim at the Canal river beach, 500 m from the bridge.

Soutomaior is famous for the castle, but also for the suspension bridge, a must stop on many hiking trails. It hangs 6 m from the Verdugo River, almost at its junction with the Oitavén. The walkway is small, with a wooden plank floor, which makes it fit in very well with the surroundings. When we get off the bridge, the Poza das Bestas awaits us, with a small sandbank where we can enjoy a swim. And, after the break, we can follow the circular hiking route to the medieval Comboa bridge, between streams and a few mills, which also leaves us at A Veiguiña Longa beach, in case we fancy a second swim.

As it passes through A Terra Chá, the Miño gives rise to several islets in its bed, they are the Ínsuas do Miño. To get to Ínsua Seivane, we have to cross the suspension bridge of Parada, in Outeiro de Rei, one of the oldest. The island has a fishermen’s shelter and a rest area with benches, tables and grills. There is also a river beach in the area, so all the ingredients for a perfect summer day are combined. Warning: the bridge sways, so only four people can cross it at a time. Be careful…

A few meters from the Tambre Hydroelectric Power Plant, also known as the “hydroelectric cathedral”, designed by Antonio Palacios in 1932, is the Tambre suspension bridge, which joins Noia and Muros. The structure is metallic, with a mesh floor, so the view is quite complete. From above you can see the old lamprey fisheries and fishermen’s shelters. From here three hiking trails depart, of varying degrees of difficulty. The area also has a recreational area.

The Acevedo-Oia bridge goes over the Tamuxe river, and gives access to Monte Redondo and Cova do Lobo. The wooden floor and the handrails made of polished logs make it fully harmonize with the landscape. It is an obligatory step on the Portuguese Way along the coast. It is currently undergoing rehabilitation.