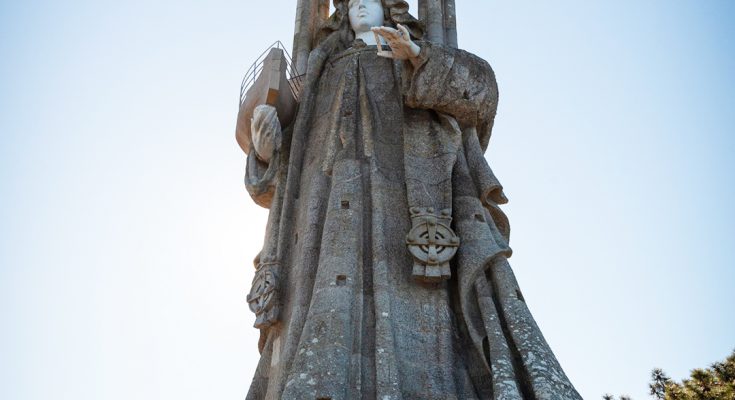 To enjoy good views, we have a lot of viewpoints at strategic points of the Galician landscape. Some of them provide an added attraction, usually a sculptural piece that harmonizes with the landscape, and that turns them into special places, ones that are not forgotten. Here we show, from north to south, eight examples of these stylish viewpoints:

In the city of A Coruña, the best-known views are the panoramic ones from the Tower of Hercules and Monte de San Pedro, but in the area of O Portiño, on the edge of the Paseo Marítimo, there is a good reason to stop at the path: the Fiestra aberta ao mar (Window open to the sea). It is a granite work by Francisco Pazos. Reminds the frame of a window, with even its exterior shutter. Three steps give way to the opening, which frames a piece of the Atlantic. Ahead we see the San Pedro Islands, an archipelago of small islands (O Vendaval, O Pé, O Aguillón) and various islets. And sea and sky.

Sometimes it seems that some clueless giant or giantess has left something forgotten on their walk. For example, in Arteixo, someone left a spyglass, one of those “land in sight”, 15 m long! Luckily, it is accompanied by a very high chair, like those of the lifeguards, to be able to take a look. In reality, it is a group of sculptures, the work of Enrique Saavedra Chicheri, entitled Monument to the Voyeur, although it is known as O Vixiador (The Voyeur). It is at the top of a rock outcrop that we find on the Sabón seafront promenade. If we sit in the chair and aim our eyes, we see a circle with the horizon: Atlantic in sight!

One of the most recent viewpoints is that of A Cidade da Cultura, in Gaiás, in Santiago. There, in the Forest of Galicia, the sculptural group Espellos (Mirrors), by Manolo Paz, is installed. Again the giants leaving… donuts? No… Actually they are two large stone cylinders, from the Lamas de Abade quarry, for more information. The use of the double arch and the arrangement of the stones reminds us of the constructions of the Camino de Santiago: walls, Romanesque architecture… leading us to the connection between A Cidade da Cultura and the Camino (remember that the Vía da Prata It has a section parallel to the Gaiás). And when we peek between the stones, framed in the ellipse, the walker’s goal: the cathedral.

If in A Coruña we had a window to the Atlantic, in Noalla-Sanxenxo, in the province of Pontevedra, we have a Porta ao Oceano (Door to the Ocean). Noalla-Sanxenxo… Isn’t that where the famous bench is? Certain! Well, to complete the furniture, now there is a door. This door is a white frame made of oak wood, strategically located in Punta Faxilda. The creators are the same Noalla-Sanxenxo neighbors who made the bench. On this occasion, while giving a clue to contemplate the best sunsets, they refer to a popular legend. Right from here, in the area closest to the island of Ons, on moonless nights, the Santa Compaña left, coming from Monte do Faro, towards the island. And how did they cross? Well, it turns out that a door appeared that took her over the sea to the beaches of Ons, where the entourage disappeared underground in the Canexol cemetery. Legends aside, from here we have an unbeatable view of the ocean and the islands (Ons, Sálvora and Cíes on clear days). Nowadays, we don’t know of any trip in the new gate…

It is not known what will be inside the Monte do Faro, in Domaio, but in the viewpoint of the summit two giant hands come out of the ground. The Mans do Monte do Faro (Hands of Monte do Faro) were carved in wood using a chainsaw, the author’s specialty, by José Antonio Fervenza “Yosi”, also known as “Yosi aizkolari”, from Moaña. The hands are in a receiving posture, since they make comfortable seats and, in addition, they rotate. One wears a watch and everything, from the “Taller Yosi” brand. Here it is not tiring to contemplate the views, which cover the entire Vigo estuary, from Redondela to the Cíes, Vigo, the Rande bridge, Baiona, Cabo Home and Silleiro, Moaña and Cangas.

If we are looking for views of the Costa da Vela, the Cíes and Ons, an ideal place to find the perfect frame is the Caracola de Cabo Home (Cabo Home Large Shell), in Cangas, on top of Monte do Facho. This giant shell is made of a steel structure, as if it was a drawing in the air, which leaves room for sight and movement. Designed to listen to the sea from inside the shell. It is a work by Lito Portela, with which he tried to make a subtle intervention in the landscape and in the precise enclave so that, at sunset, the sun it would fit right into the center of the spiral. And it seems that he has succeeded.

A classic of Val Miñor is the viewpoint of A Virxe da Rocha (the Virgin of the Rock), at the top of Monte Sansón, in Baiona. The monument was inaugurated in 1930. The sculpture, made of granite on the rocks of the mountain, was designed by Antonio Palacios. It is 15 meters high, and represents the Virgin with a boat in her right hand. The deck of the boat constitutes the viewpoint, which is accessed by an internal spiral staircase. The face and hands of the Virgin are made of marble, made by Ángel García Díez. The crown is porcelain. This sculpture, in addition to being a viewpoint, was conceived as a point of reference for sailors. From above we can see Baiona, the beaches of Nigrán and even the Cíes.

Further south, we have another perspective of height, where we have to walk quite cautiously, by the way, so as not to fall. In the municipality of O Rosal, on Mount Torroso, next to Santa Trega, in an area full of petroglyphs, the 21st century has also left its mark on the rocks. On this mountain, the profiles of the large stones were used to carve out fantastic faces, which accompany us in the panoramic view before us: A Guarda, Cabo Silleiro, the mouth of the Miño, Cíes and, inland, O Val do Miño. The Esculturas de Monte Torroso (Monte Torroso Sculptures) are the work of Pepe Antúnez Pousa, Félix G. Fidalgo and Alejandro Durán.