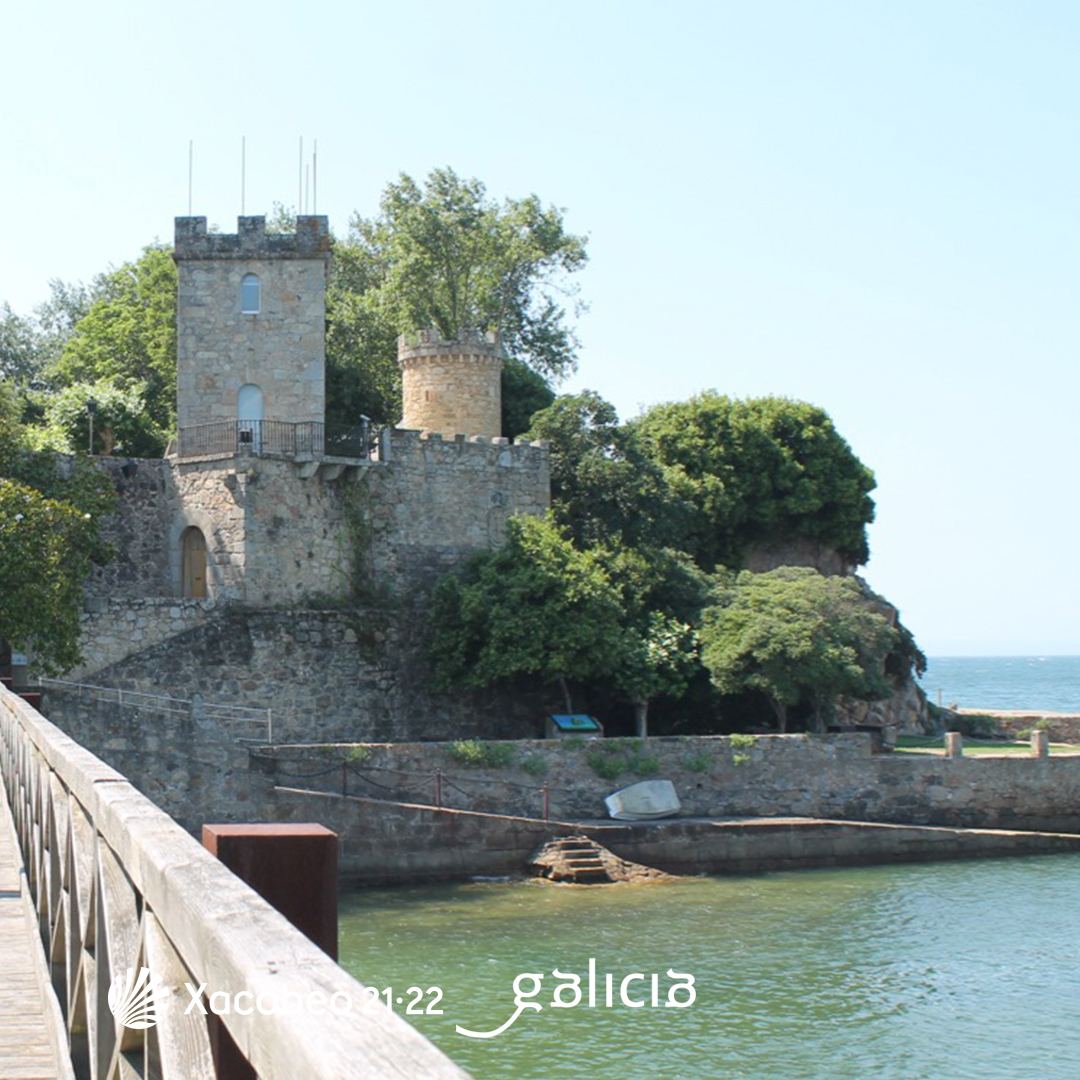 Galicia has a few castles ideal to go with children, with their percentage of nature, history and legend. Many were originally erected as fortresses and others simply as a settlement of feudal power. Those that remain standing underwent transformations and reconstructions over time, and of some only the keep remains. Most of them are at the top of mountains or rocks, to have a good panoramic view of the lands and of the communication routes; and others, on the seashore or on islands, to defend the coast. Of course, good views are assured.

The Castle of Santa Cruz, for example, is on an island, what more could you ask for? It was built in the 16th century on the A Coruña estuary, in front of the beaches of O Porto de Santa Cruz, to defend against attacks by sea. After its military function, the castle was owned by Pardo Bazán and his family and, later, it served as a residence for military orphans. After a period of abandonment, it became the property of the Oleiros City Council and, since 2001, it has been the headquarters of the CEIDA (Center for University Extension and Environmental Disclosure of Galicia), which also makes it a destination of educational interest. Today we no longer have to go by boat, because there is a long pedestrian walkway that connects the island with the Paseo de Santa Cruz. In addition to seeing exhibitions or doing environmental activities, we can enjoy a walk through the gardens and along the walkway that borders the island, with good views of A Coruña and Santa Cruz, and good dungeons along the way to tell stories.

The San Antón Castle was built at the same time and for the same reason, on the islet of San Antón, today attached to A Coruña. From the 16th to the 18th century it had a defensive function and as a prison and, later, it was a lazaretto to isolate the sailors who came with an infectious disease. Since 1968 it houses the Archaeological and Historical Museum of A Coruña, with valuable castreñas pieces. In addition to its educational interest, the building itself takes us to an unreal world, especially when we go down to the wishing well, in a dark and mysterious cistern where you have to drop a coin and make a wish.

In the Ferrol estuary, three castles were built in the 16th century, forming the «triangle of fire». Just for the name it is worth approaching. They were the Castle of San Martín, of which today there is nothing left; that of San Felipe and that of La Palma. Between the three of them, they dominated the estuary with their cannons and, to avoid the passage of invading ships, they stretched a chain across the sea between them, thanks to which they repulsed many attacks. What we know of the San Felipe Castle today is from the 18th century. It is a typical example of a bastioned battery. The A Palma Castle, in Mugardos, after successive interventions, was used as a prison. It is currently only open to visitors in the summer season. They both have large terraces to run around.

Already in the Rías Baixas, we can have a great time at the Soutomaior Castle. It is a complex that is half medieval fortress and half neo-Gothic manor from the 19th century. Its best-known inhabitant was Pedro Álvarez de Soutomaior (Pedro Madruga) who lived there in the 15th century, at the time of the Irmandiños uprisings. The castle changed hands and, in the 19th century, the Marquises De la Vega de Armijo reformed it in neo-Gothic fashion and designed the park and gardens, with a great wealth of species. Already in the 20th century the castle was acquired by the deputation of Pontevedra, who restored it. The visit to the castle becomes a journey back in time, as it has a drawbridge and everything and, in addition to the restored rooms, it has a museum space and varied leisure and cultural programs throughout the year: dramatized visits, workshops, Christmas markets… and a lot of specific programming for children.

The Castle of Sobroso also has a lot of history. To begin with, it looks like a fairytale castle, perched on top of Mount Landín. From above, we can see Vilasobrosso and the Val do Condado up to the border with Portugal. It is a medieval castle that was restored in the 20th century. Many historical figures passed through it, such as Doña Urraca, who was held here by her sister, Teresa of Portugal, and by the Duke of Traba. The legend says that he fled through the underground passages of the castle, crossing the recesses of the mountain until he reached the banks of the river Tea, from where he would march to León. In the castle, the wedding of Dinis I of Portugal with Isabel de Aragón was also celebrated. And Alfonso VII was even crowned here. Like all castles, it had several owners, including Pedro Madruga himself, until it ended up in the hands of the city council in the 20th century. The interior is restored and gives us an idea of how people lived many centuries ago. It is also the headquarters of the Center for the Recovery and Diffusion of Popular Culture of the Ponteareas town hall, with a museum of Galician and ethnographic costume. In the exterior there is a good extension of field and trees of the country.

And, next to the beach, in Baiona, the Monterreal Castle, also known as the Monte de Boi fortress, stands out in the sky. Its period of splendor passed in the 15th and 16th centuries. At that time, the Count of Gondomar named it Monterreal in honor of the Catholic Monarchs. A great wall surrounds it, because formerly the city was inside. It is very well preserved, although it has quite later additions. It also has a walkway that goes around the outside. The caravel Pinta arrived at this port on its way back from America, on March 1, 1493. A replica that can be visited is docked at the dock, as the culmination of the excursion. Commemorating the date, every year on the first weekend of March the Arrival Party is celebrated.

And we end with another of the royalty, the Castle of Monterrei, in the province of Ourense. It is one of the best preserved fortresses. Well, it’s actually an acropolis, with pilgrims’ hospital and everything. In his time he was strategic in the defense of the border with Portugal. He also did his cultural work, in fact, the first Galician incunabula was printed here: the Missale auriense. It has a museum and inn, and many corners to travel to another era.