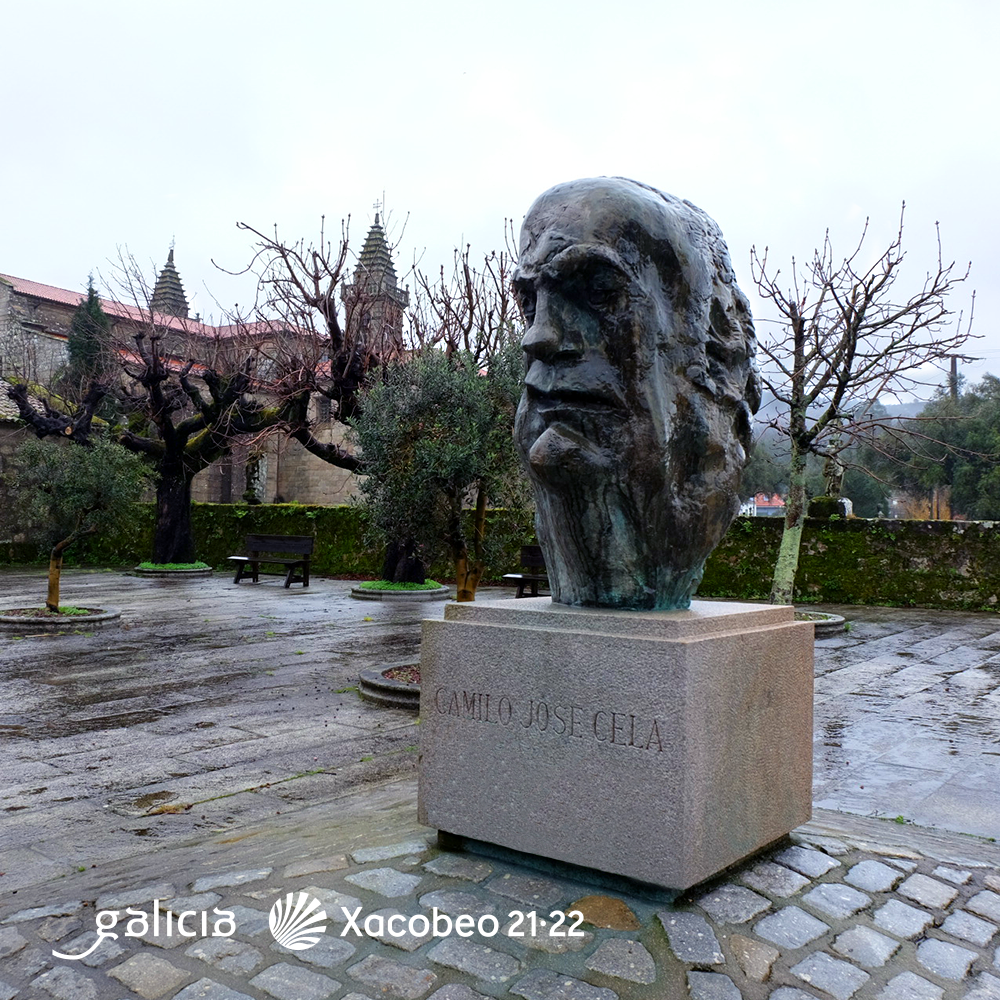 This 11 May marks the 105th anniversary of the birth of the famous Galician writer Camilo José Cela y Trulock (1916-2002). Born in the town of Iria Flavia, Padrón (A Coruña), although he moved to Madrid with his family at the age of nine, his link with Galicia has always been evident in his works. A master of post-war literature and a great cultivator of narrative in the Spanish language through novels, essays, poetry and travel chronicles, Camilo José Cela is the only Spanish novelist to have been awarded the Nobel Prize for Literature (1989). In addition, his extensive and valuable output was also recognised with the Prince of Asturias Award for Literature in 1987 and the Cervantes Prize in 1995, among other awards.

The link with the land where he was born is also evident in the development of the characters in such notable works as “La Colmena” and “La familia de Pascual Duarte”, and in his last texts the author did not miss the opportunity to return to his homeland. It is there where his characters deposit their cultural legacy, moving from the coasts of the Galician sea to the inland landscapes. We review the life and work of the acclaimed writer to travel, together with the protagonists of several of his novels, through some of the scenarios of a land with which he never lost his link of union. “I am, I feel and I proclaim myself to be Galician. And one is never anything by chance or with impunity”.

The border town boasts a close relationship with Cela, since the writer’s father was born there and his grandfather was mayor at the beginning of the last century. As a child, Cela spent several holiday seasons in Tui and as an adult he did not fail to return there frequently to remember those times. That is why he was named adopted son and why a street in the centre of the town is named after him, so that the memory of Cela is always present. The writer was the crier of the San Telmo festivities in 1973 and in that speech he revealed some of his memories of his childhood in Tui, as he had done previously in “La Rosa” (1959) and as he would do again in “Memorias, entendimientos y voluntades” (1993).

Camilo José Cela spent four years of his childhood (from 1921 to 1925) living in the city of Vigo, as is recalled by the plaque that the writer himself unveiled in April 1986 in the building located at the junction of Policarpo Sanz and Velázquez Moreno streets. The plaque, made in bronze, includes a reproduction of an image of the author from his childhood, but it is not the only effigy of Cela that can be seen in Vigo. In the park located between the streets Pi y Margall and Torrecedeira, and named after the writer, there is a bust made by the sculptor Francisco Otero Besteiro, which was inaugurated in 1991.

A Coruña is one of the cities that appears recurrently in Cela’s work. We find it, for example, in “La familia de Pascual Duarte” (1942), when the main character travels there with the aim of emigrating to America and stays there for a year and a half living in the city and doing various jobs. It is also represented in “La cruz de San Andrés” (1994) and “Del Miño al Bidasoa” (1976). In fair correspondence, the city named one of its avenues after Cela. In addition, in the neighbourhood of Ciudad Jardín stands a mansion known by the name of Casa Felisa, which is well known for having been Cela’s residence in the early 1940s. There he was welcomed by the couple formed by a sister of his mother and the architect Eduardo Rodríguez-Losada Rebellón and it was there that “La familia de Pascual Duarte” was conceived.

The map that welcomes the reader of “Mazurca para dos muertos” (1983) invites him to enter the geographical space where the provinces of Pontevedra, Lugo and Ourense are meeting, although two municipalities of the latter (Piñor and San Cristovo de Cea) will become the central settings for many of the episodes of the novel. Cela thus delves into the land inhabited by his ancestors through his father’s line before heading to Tui to construct a novel of manners and avant-garde at the same time as he wanders through the mountains of the area and among the centuries-old stones of the monastery of Oseira and the church of Santa María de Carballeda. The streets of the city of Ourense and the waters and legends of the Antela lagoon, in the region of A Limia, are also seen in this work for which Cela received the National Literature Prize.

If “Mazurca para dos muertos” reflects the rural world, “Madera de boj” (1999) looks at the Galician coastline to portray the people of the sea. It is a project that had been in the writer’s mind for several decades and which began to materialise in the mid-1980s, when he made the first of a long series of visits to Fisterra and the Costa da Morte. Settled in a chalet on Langosteira beach for several summers, Cela travelled from there to some of the most emblematic places of the region and immersed himself in the local and seafaring atmosphere in search of testimonies and inspiration for a work in which the story of the shipwrecks that occurred over several centuries was guiding his steps and his pages throughout the Costa da Morte: Scenarios and tragedies of Malpica, Corme, Laxe, Camariñas, Muxia, Cee or Corcubión also appear in a text whose genesis sealed the close relationship between Cela and this mythical region. As a testimony of that stage, apart from the pages of “Madera de boj”, there are still the road that leads to the beach of Langosteira, which has been baptised as Corredoira de Don Camilo, and the monolith with the bust of Cela and the commemorative plaque that can be seen at the beginning of that same beach.

The municipality where he was born and where his mortal remains were buried is the place in Galicia where Cela’s mark is most present. There, between the landscapes of his childhood in Iria Flavia, the family home and the railway line that led his maternal grandfather, John Trulock, to settle in Galicia, his legacy is preserved. The former House of the Canons of Iria Flavia houses the headquarters of the Camilo José Cela Foundation and the Camilo José Cela Museum. “Within these stone walls, my dream of giving back to the Galician land everything it has given me has become a reality, the unmistakable sign that I have lived here.”, Cela himself said, and so it is, since the institution offers its visitors the opportunity to approach the figure of Cela through objects related to his life and work, as well as collections of paintings, drawings, newspaper archives and other diverse materials. Integrated within the museum and with the collaboration of the Fundación de Ferrocarriles Españoles, you can also visit the John Trulock Railway Museum. Historical pieces such as uniforms, a collection of lanterns or the tapestry of the company The West, as well as the recreation of a period station, an old freight wagon and a steam locomotive that will transport the visitor to the time when the company of John Trulock built the first railway line in Galicia: between Santiago de Compostela and the port of O Carril, in the Arousa estuary. In addition, opposite the museums stands the church of Santa María de Iria Flavia, in whose cemetery lies Cela’s tomb, and in the square next to the cemetery you can see the bronze bust of the writer made by the sculptor Pablo Serrano. In the centre of Padrón, another monument, the work of Manuel Ferreiro Bahía, also immortalises the author.