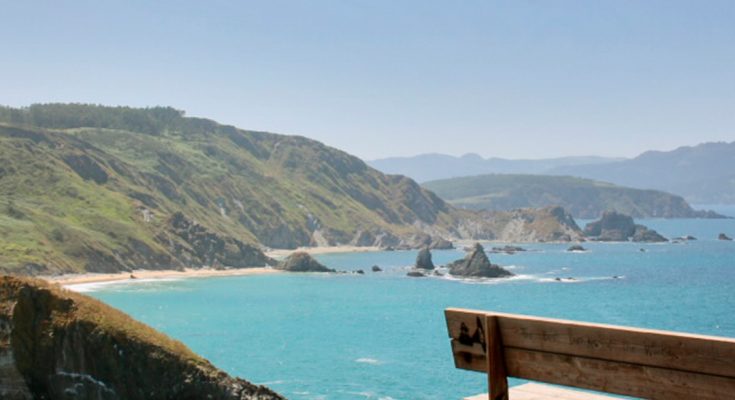 The benches, those very popular seats to take a break in the middle of the road, often become a destination in themselves. This is the case of the panoramic benches, set in perfect spots to enjoy the best views.

They are a tourist attraction for areas that are sometimes unknown or difficult to access. The reward comes when we sit down, although sometimes we have to wait in line…

It seems that it was the Loiba bank that started the trend. It is a wooden bench that has been at the O Coitelo viewpoint, in Ortigueira, since 2009. Legend has it that, in 2010, after the Ortigueira Festival that year, some members of a Scottish band walked by and engraved on its back the following: “the best bank in the world”. The translation would be something like: “A mellor orilla do mundo” but of course, from “bank” to “banco” (bench) there is very little, hence it has remained as “the best bench in the world”. And after word of mouth, and selfie by selfie, the bank’s fame spread everywhere. And what do you see from here? Well, everything we have between Estaca de Bares and Cabo Ortegal, which is not little, with furnas included.

But we have more “best benches in the world”, since the fashion of the bench with a view triumphed throughout Galicia. In the Rías Baixas, one of the most famous and vertiginous is the Redondela bench. It is at the top of Campo da Rata, in Cedeira, nailed to a rock since 2015. It also has a slogan on the back: “Galiza. It’s different”. And from there you can see the entire Vigo estuary, Rande, San Simón, Cíes… and then it depends on the view of each person.

In Noalla, they liked the idea so much that they put several. The first, the Noalla panoramic bench, in Punta Faxilda, in 2016. We can see the Cíes, the island of Onza, Ons, Sálvora, Punta de San Vicente and, on clear days, even the province of A Coruna. Shortly after, the Illa se O Outeiriño bench was installed, the panoramic bench of A Lanzada, in front of the hermitage of A Lanzada, which does not fall short either. There was a third, but it was short lived.

In the heart of the Costa da Morte we have another good panorama from the Cabo Touriñán bench. In 2015, a granite bench was placed near the lighthouse with the coordinates of its location engraved on the back: 43º03N – 9º18W, and with the reminder of being in the westernmost point of peninsular Spain. In addition to enjoying the impressive views of the cliffs of A Gaivoteira and A Laxe de Buxeirados, from here we can say goodbye to the sun in continental Europe, at least twice a year, due to things related to the rotation of the terra (between March 22 and April 25 and August 18 and September 19, approximately).

If we go inland from the Costa da Morte, in Terra de Soneira, we can go along the Zas Water Route, and rest on another bench with good views. This time it is the fervenza de Budián. Here the backing message says: “Aperta, enxebre, orballo, bico, querote… Galicia fascinates, or galego namora.” (“Hug, enxebre, orballo, kiss, I love you… Galicia fascinates, the Galician falls in love.”)

In the province of Lugo we also have two good benches: the bench at the Monte Castelo viewpoint, in Viveiro, almost as a reward after the 11 km hike up the mountain to reach it. The views over the estuary are well worth it. Another is Xove, next to the Aa Roncadoira lighthouse, with views over the Viveiro estuary, Estaca de Bares and Illa Coelleira.

Or the sea overwhelms, but the interior too. In A Ribeira Sacra, at the O Pé do Home viewpoint, which can only be reached on foot, by the way, is the A Nogueira de Ramuín bench. With views of the Curva da Ferradura, the Santo Estevo pier and the Sil Canyons.

An ideal break. In Marín, after a long 23 km hiking route, especially if we do it on foot, it is nice to sit on the bench in A Pastoriza, and let our eyes wander over the Pontevedra estuary, the illa de Ons, Sanxenxo or Beluso.

And there are also banks in the middle of the mountains, like the one in Padrenda, in the province of Ourense as well, where the view reaches Viana do Castelo and part of the provinces of Ourense and Pontevedra. Next to the bench, a bear silhouette, remembering the past of the brown bear in the place.

Other less spectacular benches, but with good views as well, are the Vista Alegre Park in Ourense, overlooking the city; the tree of lovers in the Alameda de Santiago, or the window open to the sea in A Coruña, with views of the islands of San Pedro.