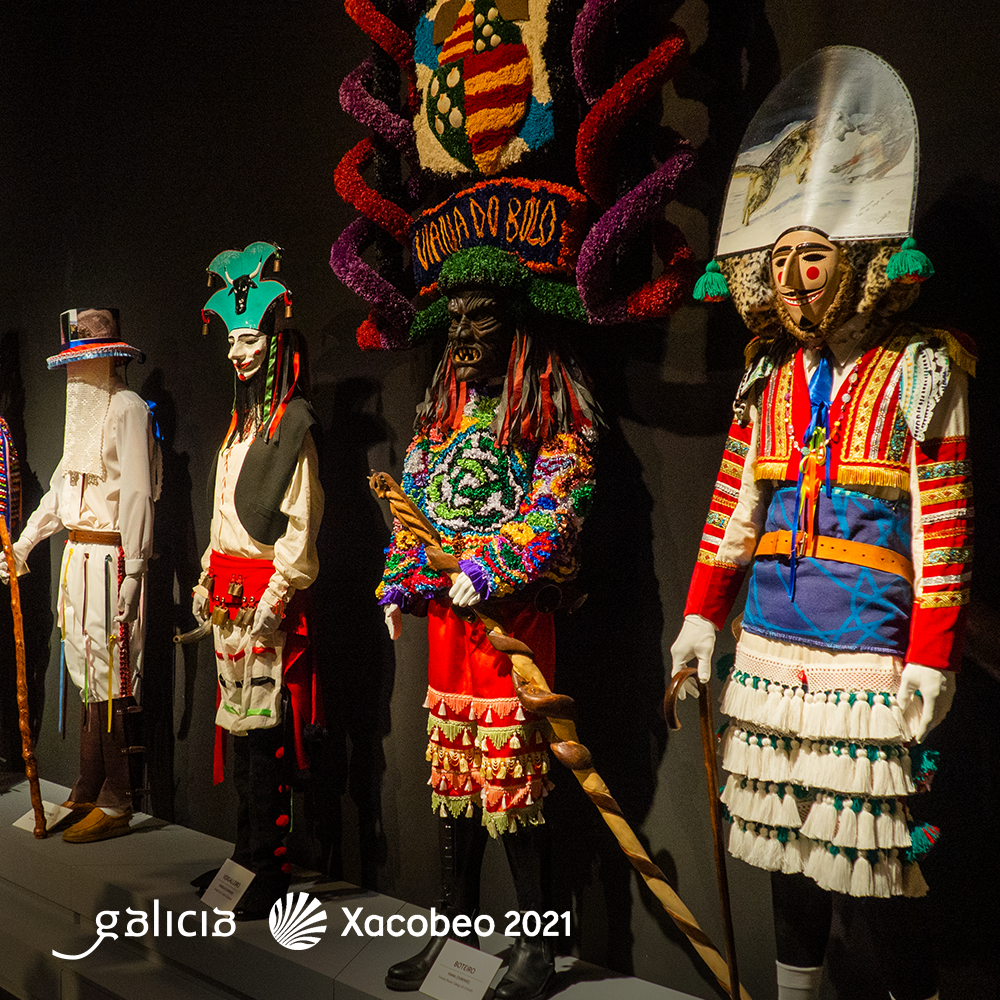 Trying to trace the origins of the entroido (the Galician carnival) entails entering into lands where the mists of the past allow us to glimpse more conjectures than certainties and where the line separating history from legend is blurred. For centuries, the celebration has been inextricably linked to Holy Week in the calendar, since it is the latter that determines the date of Ash Wednesday (the beginning of Lent), thus also setting the date of Entroido Tuesday (the eve) and with it, the rest of the dates of the festive cycle of Entroido. However, its origins go back before the staging of the Passion and Resurrection of Christ and are linked, in the opinion of the experts, to ancient pagan celebrations that later had to be adapted to the postulates of the Catholic Church.

It is an age-old phenomenon that has evolved over time, preserving ancestral elements, immortalising local traditions and characters, and recreating historical events and episodes. All of this can be seen through the protagonists who today continue to focus the attention of the main Galician entroidos and the staging they carry out. This combination of tradition, history, respect for one’s own culture, deep-rootedness and capacity for attraction is what has led to nine of these entroidos being considered celebrations of tourist interest today.

A tour of these celebrations allows us to identify their differences, but also to find some common aspects. The main one is the irreverent eagerness of most of the celebrations and the role reversal that is staged in many of them. However, although the entroido is a time of fun, festivity, satire and even mockery of established power, in some of these celebrations figures of great authority emerge against whom there is no room for opposition. This is the case, for example, of the Pantallas, the “masks” (an element that by extension serves to define the whole character) that star in the events in Xinzo de Limia. In this town, which boasts the longest entroido in Europe and also one of the oldest and declared a Festival of International Tourist Interest, the Pantalla represents for a few days the maximum expression of authority and no one dares to disrespect it during its journey through the streets of Xinzo. Its roots go back to the castrexa period, as could happen with the Cigarróns de Verín, although in this case there are those who link them with characters not so distant in time. A legend, probably related to the custom of the Cigarróns of asking for money from people they met in the street or demanding an invitation in a bar, related this figure to an old tax collector of the Counts of Monterrei.

A similar explanation has been adopted to try to unravel the origin of the Peliqueiro, the central figure of the festival in Laza, a town that constitutes the third vertex of the magical triangle of the entroido in Ourense. One of the hypotheses about its origin explains that this masked figure would be the response of the Counts of Monterrei against the vassals who refused to pay taxes, although there are also those who maintain that its origins go back to the castrexos or Roman festivities. The Peliqueiro also has parallels with the Pantallas, as both share the fact of becoming the embodiment of three powers: the religious (symbolised in the mitre of the character from Laza and in the mask of the one from Xinzo), the social (as figure who organises the events of the entroido) and the judicial, as with the whip and the swollen bladders, respectively, they bring order and impart punishments.

The exercise of an authority seasoned with mischief and an origins in which there are also references to a rebellion against the lordly power is also present in the entroido of Maceda and in the staging of the central character of its festivities: the Felo. Although there are also those who relate it to older societies and to old fertility, initiation and hunting rites, which would explain the traditional decoration of their mitres with birds and other animals from the nearby mountains of San Mamede.

The origins of the Mázcaras de Manzaneda, recognisable by their colourful costumes and colourful dances, are even more diffuse, and despite what might appear from their name, they wear their faces uncovered. In Viana do Bolo, the most important character of the festivities is the Boteiro. He is responsible for opening and marking the way for the villagers who march in festive procession through the town or through the surrounding villages, forming the Folión, a name also used to refer to similar groups in several of the previous municipalities.

Already outside the boundaries of the province of Ourense, two other entroidos of tourist interest boast traditional characters. In both cases it is less complicated to trace their origins. The Madamas and the Galáns put the dance and the colourful note to the celebration in the parishes of Santo Adrán and Santa Cristina de Cobres, in the Pontevedra municipality of Vilaboa. There is written evidence of this tradition at the beginning of the 18th century, but it is believed that the origin of the costumes worn by men and women and the dances with which they go around both parishes has its origins in guild customs of the 15th or 16th centuries. Even more recent are the Xenerais da Ulla, the singular contribution that the eight municipalities of the so-called natural region of the river Ulla (A Estrada, Boqueixón, Santiago de Compostela, Silleda, Teo, Touro, Vedra and Vila de Cruces) make to the Galician entroido. The nineteenth-century uniforms that dress by the members of the two festive armies that participate in this performance refer directly to the warlike confrontations that took place two centuries ago (the War of Independence, the Solís Uprising or the Carlist Wars), although in this case the words and the verses replace weapons to engage in an amusing dialectic combat.