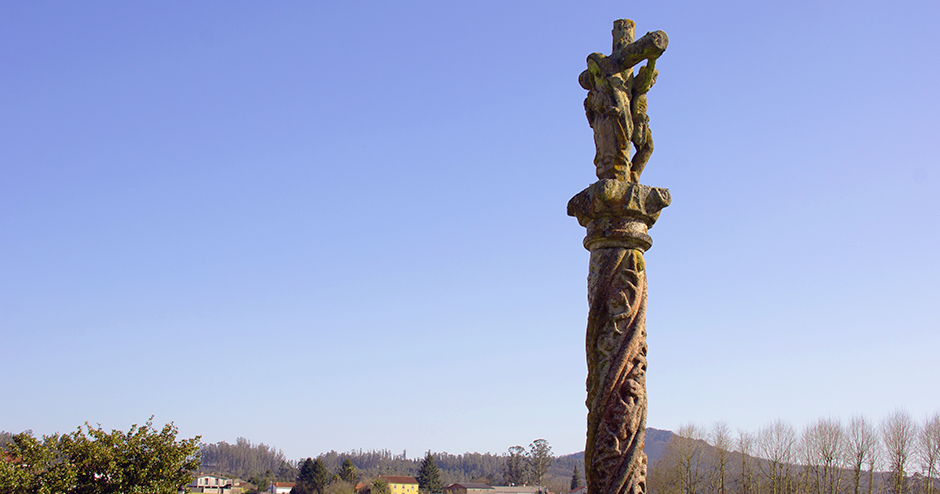 Here is a tricky question: Is it possible to find a piece of the Santiago Cathedral… outside the Santiago Cathedral? We do not mean a symbolic piece, the piece of Compostela that every pilgrim and visitor carries in their heart: we mean a significant, large and palpable portion. And the answer is yes: at least one column that belonged to the Jacobean temple can be seen even outside the municipality of Santiago.

The Santiago Cathedral recently turned 800 years old and, therefore, there has been enough time for history to take many twists and turns around it. One of them was the renovation of the north facade, which overlooks the Praza da Inmaculada and the San Martiño Pinario monastery, mid-eighteenth century. In 1757 the work was commissioned, and began two years later under the supervision of phenomenal architect Lucas Ferro Caaveiro. The facade came from the original Romanesque building and was inspired by the theme of Paradise. Part of the elements it contained were relocated on other places in the building. If the south door, the one that faces Praterías, sometimes seems overloaded considering the time it was built, the reason is this: that is where they found room to put part of the dismantled pieces of the north facade.

But part of what was removed from that area disappeared or was simply sold. Among them, some of the columns that supported the entrance arches. Where did they end up? Professor and Jacobean expert Francisco Singul pointed out that several of them are preserved in the Cathedral Museum, open to the public and very interesting. In addition, he explained, in a parish of the nearby municipality of Boqueixón there is a stone cross (cruceiro) of which the shaft is suspiciously similar to these pieces.

It is the cruceiro that can be seen next to the Santa María de Lamas church, in the middle of the festivities plaza. It stands 2.32 meters tall and is decorated with a plant  spiral that rotates in a direction opposite to that of the pieces preserved in the Museum. Between the stalks you can see small figures, possibly grape harvesters, who also appear in their Compostelan relatives. Because, as you may have guessed, everything points to this being the shaft of one of the twelve columns that once supported the Puerta del Paraíso (“Paradise Door”) of the Compostela Cathedral.

It is unknown when the piece was moved to this place. Singul believes that it must have been towards the end of the eighteenth or early nineteenth century. The shaft is quite worn down from time, the winds and the rain, but it is still possible to contemplate the beautiful workmanship of medieval sculptors. Other columns were even more complex, with animals and birds gnawing on the grape vines, very symbolic plants within Christian iconography.

Crowning the Cruceiro of the Lamas festivities plaza is a piece with a human figure on each of its four sides and, above, a cross with Christ on one side and the Pieta on the other. It is worth traveling a few kilometres towards the periphery of Compostela to discover this secret piece of the Cathedral … far away from the Cathedral.