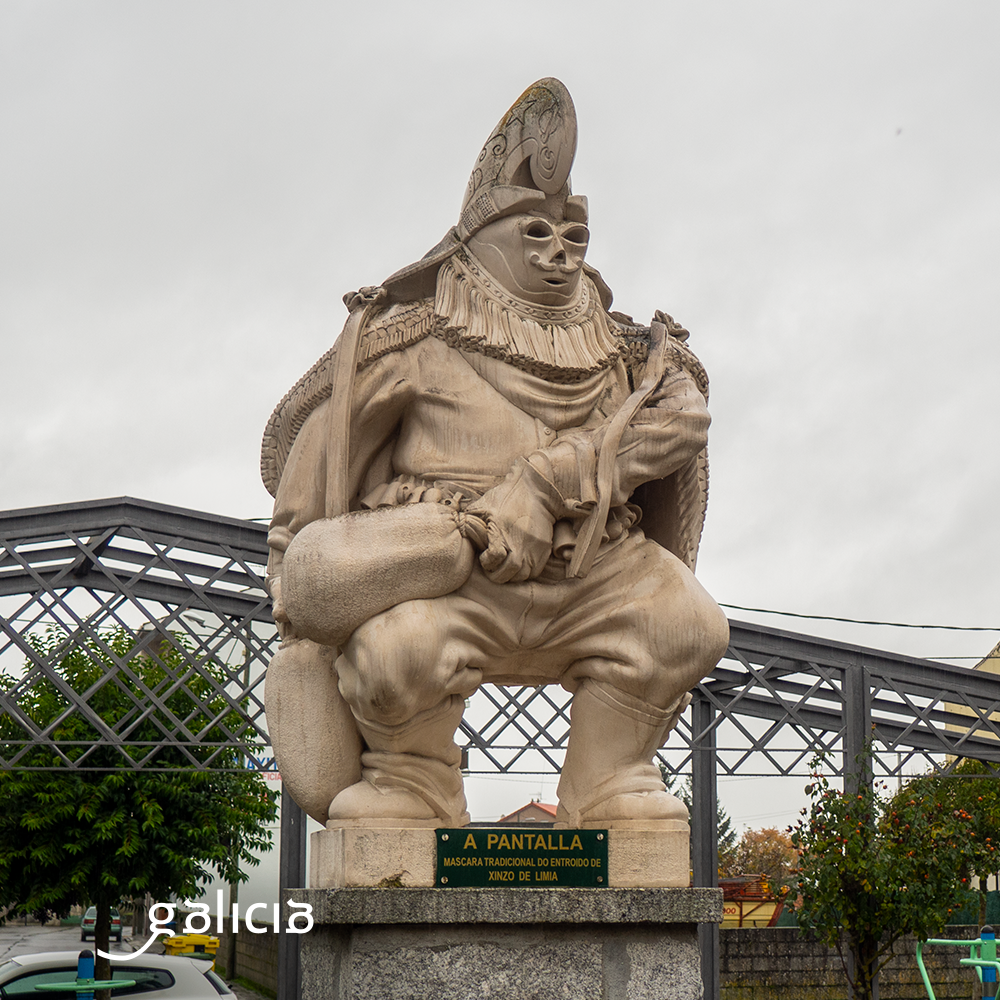 Almost with no time to say goodbye to January, the atmosphere of entroido (carnival) begins to be noticed already in those towns of Galicia that have made this celebration a cultural, ethnographic and festive event. The result of months of effort and collective work will begin to bear fruit with the start of a celebration that claims to be the most extensive in all of Europe and that since last year has also been considered a festival of international tourist interest: the Entroido of Xinzo

It will be a month full of events in which the streets of the town will again be taken by a special character erected as a central symbol of the celebration: the Pantalla. The main piece of his clothing is a mask that embodies both satire and authority and gives the person a special status. The Pantalla carry bells, sleighbells and bladders of inflated animals that strike producing a very characteristic noise. Its responsibility is to watch that everyone is disguised during some of the central days of an Entroido that this year presents several new features.

The first date indicated in red of your calendar will be February 1st, Saturday of the Petardazo. which will serve to start the celebrations. The initial “chupinazo”, the speech of the authorities and a night of music and party in the streets will warm the atmosphere for the first monographic Sunday of this emblematic introido: Sunday Fareleiro (February 2nd). During that Sunday, neighbors of all ages will gather in the Plaza Maior to fight, armed with flour or bran, a fun battle whose origins are linked to ancestral rites.

The next weekend there will be double celebrations again. Saturday of the Hanging of the Meco (February 8th) will fill the streets of Xinzo with a parade in which the entroido, represented by the Meco, will be taken in procession while it is the object of all kinds of teasing by the public. Corazas, Fachóns, Entroido’s Bull, The Fat Men and the Men of Straw will be the members of their peculiar entourage. A day later it will be the turn of the unique competition of throwing clay pots full of flour from Domingo Oleiro (February 9th), a celebration that originally was not part of the Entroido cycle and that holds similarities with celebrations that take place in others points of Spain and Portugal. For that day, one of the novelties of this year’s program is planned: the Mascaritas Dance, a traditional celebration that had been forgotten for four decades.

The third weekend of the Entroido of Xinzo will have the most important appointment on Saturday Corredoiro (February 15th), the quintessential female party of this celebration. They will be the protagonists of an evening in which they will meet for dinner and party, although there will be no shortage of men who will dress as women so they can also participate in the fun. The next day will be Sunday Corredoiro (February 16th).

On Friday 21th will be dedicated to the childs, on Saturday 22th there will be “chirigotas”, and the festive and costume atmosphere will continue on Sunday 23th and Monday 24th with the lively accompaniment of the brass bands.

Traditionally, the Tuesday of Entroido (February 25th) was one of the most massive days of the festive program for the spectacular parade of brass bands, “comparsas” and floats, but last year it had to be postponed the following Sunday because of rain. The change was so well received that this year the leaders of the organization have decided to repeat the experience. On Ash Wednesday (February 26th) the Farewell of the Entroido will begin with the Burial of the Sardine, a celebration in which the cries for the end of the party will coexist with the laughter that will awaken some funny songs about the local news impregnated with satire.

The end of the party, until next year, will come with Piñata Sunday (March 1st) and the last presence on the streets of Xinzo of its famous Pantallas. It will be a day of music, dance, rich flavors and, for the second consecutive year, a parade of floats, brass bands and troupes.

This will conclude an intense month that will make it possible for anyone who wants to join the party numerous occasions to do so. Do you already know when you will do it?