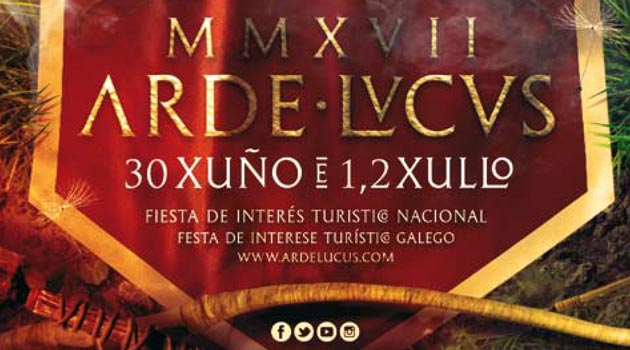 The Arde Lucus festival began in 2002 linked to the summer solstice and with a main aim: to recall the founding of the city of Lugo recreating its roman past. Since then, and every year in the month of June, the walled historic centre is transformed for three days into Lucus Augusti, significant city of the roman Gallaecia, offering visitors a complete programme of activities, in an unrivalled setting like the Wall, which takes an important role during the festival.

One of the major strengths of this celebration is the implication of the people who, either with roman or “castro” clothes, take the streets for the weekend, with an active participation in the festival. They are those who, working together with different associations, study continually the past and bring it to the present. In the same way, everyone who visits the festival can also wear roman or “castro” clothes and walk through the streets dressed in their best. It is not indispensable, of course, but if you want to do it, there are numerous shops in the city that sell and rent this kind of clothes.

Such was the growth of this festivity in the last years, that in 2001, it reached its recognition of Galician Tourist Interest and this year, they will celebrate their National Tourist Interest.

There are a lot of surprises in the streets and squares of the city during these days. Music, fireworks, mythical creatures, Celtic warriors and roman weddings are some of them. Moreover, the programme is full of street animations that contributes the colour, the sound and even the smell of the roman age.

There is also a big market with products coming from a wide variety of corners around the world.

Another big attraction of this festival is the CIRCVS (Roman Circus), an amazing show in the sand, where we can see fights between the most important gladiators of the Empire.

As a curiosity, the festival admits Euro, but it also has its own coin. This year the coin is made of bronze and golden brass from 112 A.D., reminiscent of Trajan emperor.

Definitely, Arde Lucus offers a fantastic opportunity to revive a small sample of our history and it also marks the non-official beginning of the summer in Galicia.

This year, the festival will begin on June 30th and it is expected to exceed the  600.000 visitors. Furthermore, more than 300 activities are programmed and 40 of them are new.

Are you going to miss it?