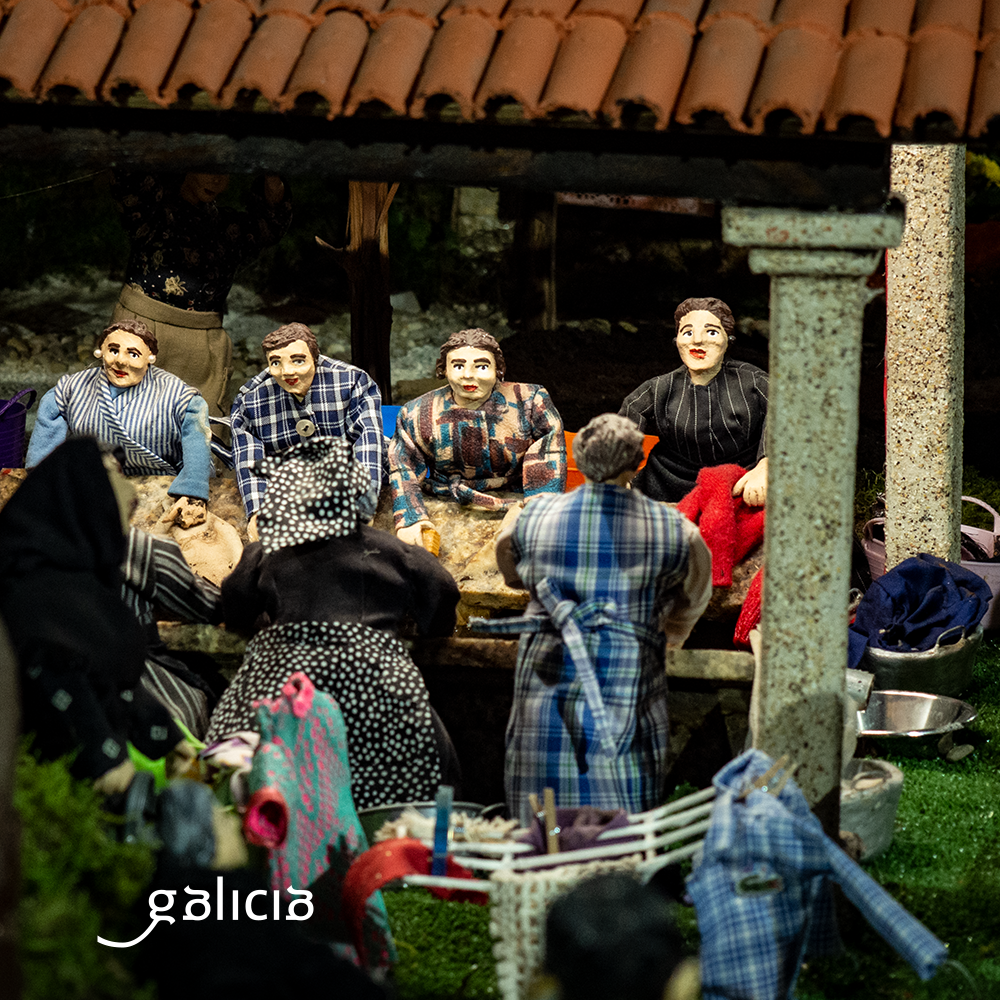 Christmas is a time of celebration, reunion and tradition. And among the latter, there is one that stands out from the rest because of its popularity and antiquity. We are talking about the staging of the birth of Christ with miniature figures, or what is the same, the Christmas cribs or nativity scenes. This practice dates back to the very beginnings of Christianity and is deeply rooted in Galicia.

In December, with the countdown to Christmas already underway, the protagonists of the nativity scenes begin to take their usual places in many Galician homes, as well as in various other spaces: from churches to city halls, through stores, social venues, public squares, educational centers and a long list of locations.

Some of these nativity scenes are modest recreations that are limited to representing the central characters of the Christian tradition, but others are large and complex montages that require weeks of intense work and the collaboration of many volunteers. And some of the latter acquire the category of works of art becoming celebrations capable of attracting the attention of thousands of visitors. This is the case of two nativity scenes that have been staged for several decades in the municipalities of Begonte and Valga and that share the fact that they have been declared of tourist interest.

This year and despite the covid, its leaders did not want to miss this annual event and have opted for alternative solutions to maintain the spirit of their nativity scenes and share them with an audience that in both cases exceeds 40,000 visitors per year. This time, the Valga Nativity Scene will eliminate the crowds by eliminating school trips and reducing the capacity to small groups, preferably families and local residents. In addition, those responsible will be attentive to compliance with the safety distance and hygiene measures and the use of masks. Begonte has almost completely ruled out making visits in person, so they will opt for a virtual format through its website so that Internet users can enjoy the spectacle of the crib without having to travel.

About thirty neighbors, grouped in an association created for this purpose, are responsible for shaping the Artisan Nativity Scene in Valga, a scene that this year will complete its first quarter century of life. In addition to its size and complexity, with about 4,000 figures and a complex network to give them life, the Nativity Scene of Valga is characterized by its attachment to the land and the present. Along with the usual protagonists of the nativity scenes, one can see figures that recreate scenes typical of the Galician rural world, such as traditional agricultural work or legends such as the Santa Compaña. There are also important local figures among the inhabitants, such as the Bella Otero, or Galicians, such as Rosalía de Castro, as well as figures that allow us to remember the main events of recent months. To characters like Donald Trump, who joined already in previous years, will be added on this occasion other protagonists of the present as the epidemiologist Fernando Simon. The nativity scene will be open to visitors in its usual location from December 6 to January 10. More information at http://belendevalga.es

The history of Begonte’s Electronic Nativity Scene goes back even further in time. In 1972, specifically, when following the example of the Someso Professional Training Center (A Coruña), the parish priest José Domínguez Guizán decided to promote an articulated birth that, following the Christian tradition, also contributed to making the town known. Almost half a century later, it can be said that the objective was more than met, since ten of thousands of people visit the Begonte Nativity Scene every year. As in Valga, there is also room for local traditions here. Among the animated scenes that can be seen there are several related to the customs of the A Terra Chá region and the way of life in the rural world. Since its inception, it has not stopped growing and incorporating new elements, encouraging those who visit it every year to continue to be surprised. In addition, the pieces that have been replaced have served to shape a museum, attached to the nativity scene, which allows us to know its origins and its evolution. Several contests (poetry, art, journalism, drawing …), the participation of a renowned crier and other diverse activities complete the offer of a nativity scene that this year can be enjoyed virtually through the web http://www.belendebegonte.es