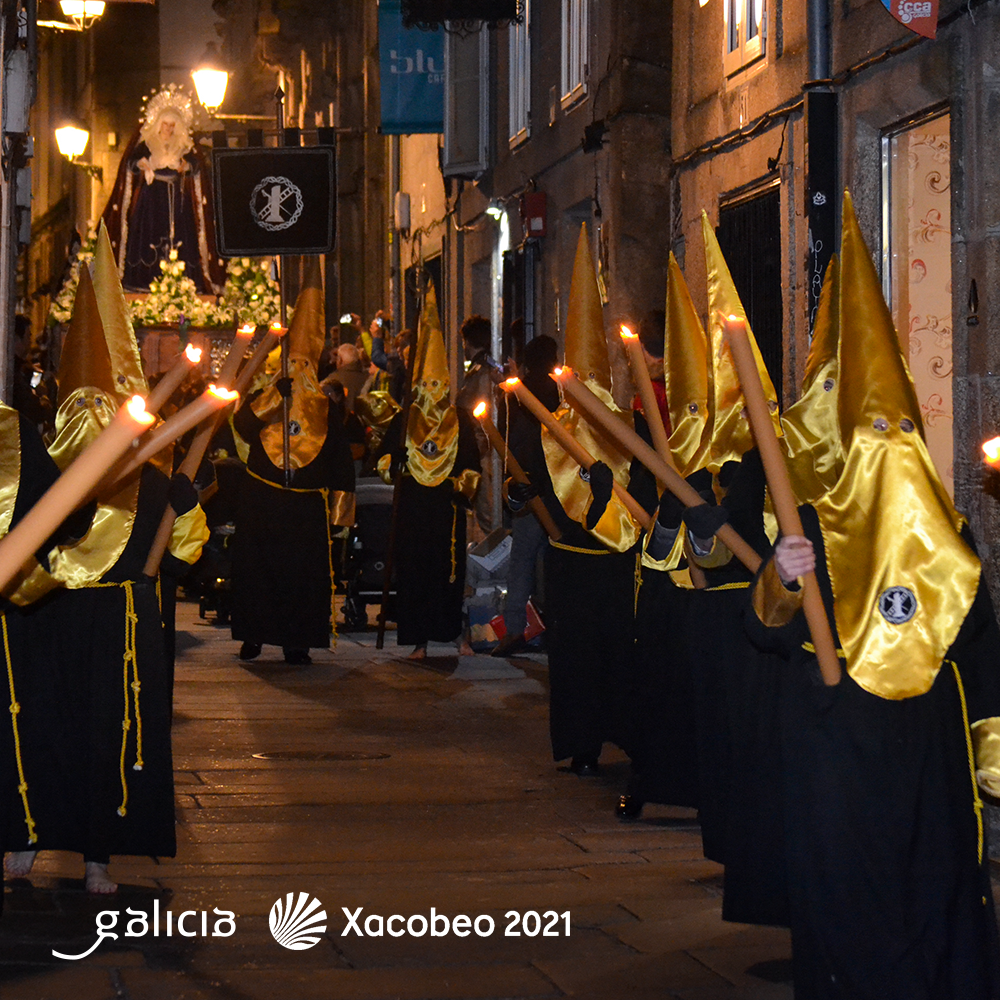 Easter is a time that is experienced with great intensity throughout Galicia, but especially in those towns and cities where religious events are particularly deeply rooted and traditional. There are nine towns and cities where these celebrations boast unique characteristics that have led to their events being declared of tourist interest. And although all of them will be affected by the restrictions imposed by covid and the decision not to hold processions to avoid crowds, none of them want to give up their place in the annual calendar of festivities. Their organisers are already preparing alternative proposals so that the pandemic does not defeat devotion and tradition.

This town in the Lugo region of A Mariña boasts a Holy Week that has been declared a festival of international tourist interest and stands out, among other reasons, for the artistic value of its images, some of which are articulated. The “Paso” of the Supper, created at the beginning of the 19th century by a craftsman using local sailors as models to shape the figures of the Apostles, is more than two hundred years old. The processions of the Last Supper, The Arrest, The Encounter and The Holy Burial are some of the most emotional and colourful of its usual calendar. This year it will not be possible to enjoy them in the street to avoid crowds, but worship will continue in the churches and exhibitions and virtual activities will be organised.

Since 2014, Easter Week in Ferrol has also been recognised as a festival of international tourist interest. From Palm Sunday to Easter Sunday, the five brotherhoods of the city organise a total of 24 processions that fill the streets of Ferrol with fervour and colour. The main events take place between the neighbourhoods of Esteiro and A Magdalena on Wednesday, Thursday and Good Friday. This year, these processions will be replaced by alternative events, which will take place in the headquarters of each Easter brotherhood and in the Angustias, Amboage and Contralmirante Azarola Gresillón squares, respecting the sanitary measures and the capacity restrictions established by the authorities.

The streets of the city of the Apostle are the unbeatable setting for the development of a Holy Week of regional tourist interest that has undergone an intense revitalisation in recent years, as demonstrated by the fact that Compostela now has more than a dozen brotherhoods. Its members are responsible for organising the 17 processions which recreate the main episodes of the passion, death and resurrection of Jesus Christ. The events planned for this occasion will take place between 26 March and 11 April, although the processions will also be dispensed with in order to avoid the health risks associated with crowds of people. Instead, the activities organised by the confraternities will be moved to their own headquarters and other enclosed spaces where capacity can be controlled and health measures can be complied with.

The traditional festivities of Easter Week in Fisterra, also declared a festivity of Galician tourist interest, add a singular recreation in this town of the Costa da Morte that year after year congregates thousands of people, becoming the main event of its extensive programme. It takes place on Easter Sunday and the locals themselves are responsible for bringing to life the protagonists of the resurrection of Jesus Christ. As last year, the promoters of the activities have had to cancel the processions and the aforementioned representation, but the liturgical acts planned inside the parish church of Santa María das Areas are maintained, and to avoid that the capacity limitations prevent the faithful and the curious from taking part, the Xunta de Confrarías da Semana Santa de Fisterra will broadcast them live through its space on Facebook.

The celebration of alternative activities centred on the processions that should take place every day is the idea on which those in charge of the board of brotherhoods of Lugo are working to keep Holy Week alive in the city of the wall, a festival also of regional interest. Thus, the neighbours will not be able to see the procession of the Holy Sacrament (a singular event linked to the privilege that the Cathedral enjoys to exhibit it permanently) nor the colourful encounter between Jesus Christ and the Virgin, but they will be able to join, with the consequent capacity limitations, the events that will be organised on special days such as Palm Sunday, and Maundy Thursday and Good Friday.

The processions that take place from Palm Sunday to Easter Sunday make Holy Week one of the main festivities in the Mondoñedo calendar and have led to it also being considered a festival of tourist interest in Galicia. Its origins date back to at least the 16th century, and although on this occasion the locals will not be able to take to the streets to attend these acts of great fervour and solemnity, they will be able to go to the monumental cathedral to follow the different masses planned throughout this festive cycle.

Declared of regional tourist interest in 2017, the Holy Week of Betanzos stands out especially for the processions of Palm Sunday and Maundy Thursday and Good Friday, being the one popularly known as Os Caladiños the most famous of them all. For the second consecutive year, the streets will not be the scene of the traditional route of the “pasos” and the brotherhoods and Nazarenes, but the liturgical acts will keep their spirit alive and the social networks will contribute to their promotion as it happened a year ago, when they were broadcast through the YouTube channel of the Pastoral Unit of Betanzos.

The artistic value of its “pasos”, some of them articulated to give more realism to the celebration, its antiquity and its roots make the Holy Week of Cangas one of the most outstanding in the province of Pontevedra and also allowed it to be declared of tourist interest in Galicia. Some of its brotherhoods were founded three centuries ago and their work has contributed to the fact that processions such as the Holy Supper, the Denial of St. Peter or the Holy Meeting attract large crowds. None of them will go out this year, but some liturgical acts are maintained and brotherhoods such as the Hermandad de los Dolores y la Soledad encourage residents to decorate their balconies with commemorative flags.

The involvement of the entire parish of Paradela, in the municipality of Meis, Pontevedra, has made its Easter Week one of the most outstanding in Galicia and therefore also of regional tourist interest. The locals themselves become actors for a few days to give life to the main characters of the central episodes of the biblical story: the triumphal entry of Jesus into Jerusalem, the Last Supper, the arrest of Christ, the trial, the Stations of the Cross…. All of these are re-enactments which, like a year ago, will fall out of the programme of activities on this occasion due to the covid restrictions, although the brotherhood will probably once again take advantage of social networks to organise a Virtual Holy Week.