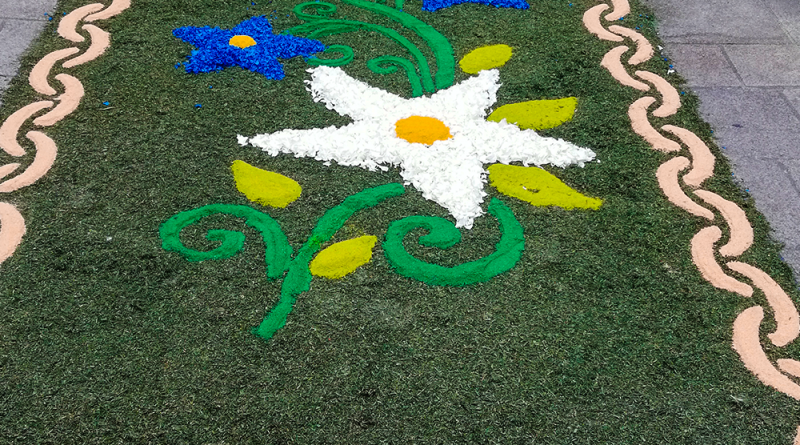 In this time of year the festive calendar begins to fill with dates marked in red. Corpus celebrations and other ethnographic acts that have been declared of tourist interest should already be in full countdown or filling the streets of towns and cities with animation and fun. But the covid has caused that many of these festivities have been suspended. Even so, the organizers have not wanted to completely give up their appointment with tradition and are promoting alternative celebrations to keep alive the flame of the festivities.

Declared a international festival of tourist interest, the Corpus Christi of Ponteareas is famous for the spectacular images of floral carpets covering the streets of that town in Pontevedra. On this occasion, the tradition that dates back to at least the mid-19th century will have to be postponed until 2021, but the municipal officials and the representatives of the volunteers groups have agreed to carry out a campaign to disseminate this ethnographic heritage through the social networks that will serve to start promoting the Corpus of next year.

The Corpus Christi celebration in Bueu is also linked to the image of the beautiful carpets made with flowers by groups of neighbors and entire families. Three years after its declaration as a Festival of Cultural Interest, the pandemic has also forced all parties involved to find ways to reinvent themselves and keep the celebration alive. The main option that has been raised is the creation of a single carpet on the outside of the parish church.

A little over a month ago, the Carpet Association of Ares and the City Council of Ares reported with “great regret” the suppression this year of the activities planned for the weekend of June 13th and 14th because of the covid. They recalled that some of the main aspects of this celebration (of tourist interest since 2011) was the joint work, hand in hand, and for several weeks of the most veteran neighbors, and during the previous night of the smallest. This in current circumstances are impossible to carry out. Neighbors have quickly appealed to keep this traditional colorful by adorning the balconies of their homes with flowers this weekend.

The Festa da Coca in Redondela is another of the celebrations that have been postponed this year, and with it the traditional Corpus Christi rugs and the rest of the elements that made the celebration declared of tourist interest two decades ago. But the floral tapestries will be present again through the virtual contest promoted by the City Council. The intention is that the neighbors make rugs or miniature models from their homes, which will then be evaluated by a jury and exposed through the municipal social networks.

Also in Mos they have chosen to make the leap to the virtual world to not stop enjoying their Festa da Rosa (of tourist interest since 2014). This year the celebration will be transferred entirely to the Web and will include activities as diverse as workshops, musical performances, children’s shows and videos. There will also be the opening speech, which this year will be given by Ángel Pichel, Head of Emergencies at the Álvaro Cunqueiro Hospital, and a children’s video contest in which children will be able to present theirs rose bushes. More than half a thousand people will take an active part in the programmed activities.

Neighbors participation is one of the most important elements of the Festa do Boi (medieval celebration that in 2006 was declared of tourist interest) and its organizers want this spirit to continue this year, despite the suspension of the celebration. That is why the Xan de Arzúa Association has called a façade decoration contest to encourage residents to decorate the streets of the town with medieval and artistic motifs and a troubadour contest in video format that will be broadcast through Internet.