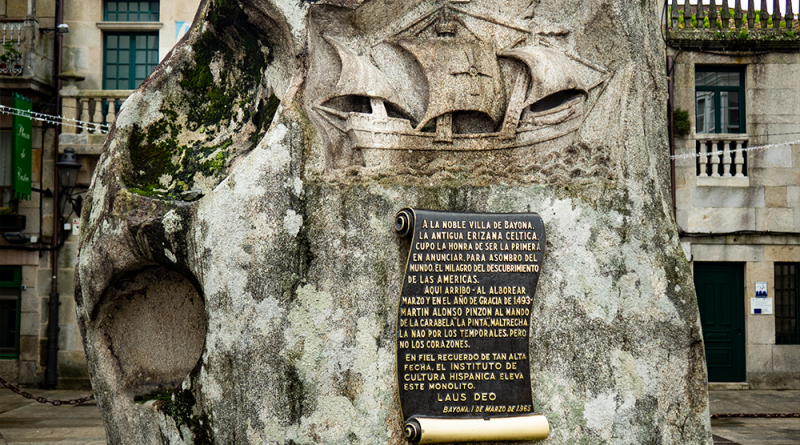 There are dates that are engraved in the history of some towns and villages. In Baiona, the date marked on the calendar is 1 March, as it was on that day in 1493 when an event took place in this town on the coast of Pontevedra that its inhabitants have proudly remembered for centuries and which in recent years has become the focus of their most iconic festival.

Throughout its history, the inhabitants of Baiona have seen on several occasions how the waters that bathe its coasts and the land surrounding the city were the gateway to various conflicts. This had happened, for example, in the first third of the 14th century during the war between Castile and Portugal with the attack of a Portuguese fleet. This had happened again in 1388 when the threat of English troops that had reached Galicia through A Coruña forced the city to surrender. And so it would happen once again in 1474 when it was taken by Pedro Álvarez de Sotomayor.

But on that 1st March 1493, no armed confrontation was to take place and no fleet was to threaten Baiona. A single ship arrived in port to announce the success of a voyage that had begun seven months earlier in Puerto de Palos. It was the caravel Pinta, one of the three vessels that made up the expedition with which Christopher Columbus intended to open a new route to the Indies. His voyage had culminated in an unexpected success on 12 October 1492 with the landing on a small Caribbean island, and on his return, Baiona became with that Arribada (Arrival) the first port in the Iberian Peninsula to receive the members of the voyage and to have news of that feat, whose real significance of which would take a few years to be understood.

Beyond the academic discussions about who were the first Europeans to reach America, about whether Columbus believed he had reached the Indies or had already begun his voyage in search of a continent whose existence he had some indication of, or about the exact moment when he knew that his expedition had reached on the other side of the Atlantic, what is certain is that the arrival of the Pinta at Baiona was an event of great symbolic value. It also laid the foundations for the importance that the town would play in future trade between Europe and America. This is evident today in one of the many places in the town that preserve the memory of that era: the Casa de la Navegación (House of Navigation). This building, located in the historic centre of the town and also known as Casa Carvajal, houses an exhibition that traces the entire history of Baiona, although paying special attention to its relationship with the sea and its role in the trade routes.

But the main monument that remembers the Arrival of 1 March 1493 is the replica of the Pinta caravel built in the early 1990s to commemorate the fifth centenary of the discovery of America, which remains moored in the port of the town as a museum. Inside you can contemplate figures that recreate the crew members and the natives who accompanied them on their return voyage, as well as metals, plants, food and animals brought from those lands.

Not far from the port, on the Ribeira promenade, there is an element directly related to that Arrival. It is the Pozo da Aguada (Water Well), so called because it was the place used by the crew of the Pinta to get water and return to the sea on 11 March 1493, bound for the Port of Palos to complete their journey. Other monuments also remind us of the importance of the Arribada. At the foot of the Monterreal enclosure stands the sculptural ensemble that forms the Monument to the encounter between two worlds, erected for the fifth centenary celebrations, and in the Pedro de Castro Square a large 20-ton rock shows us sinde 1965  a caravel sculpted in stone and a plaque commemorating the arrival of the Pinta in Baiona. On the Ribeira promenade you can also see a mural made on tiles that recreates the course of the caravel and which was inaugurated on the occasion of the 470th anniversary of the Arribada. Next to it, a plaque placed in 1993 commemorates the entire crew of the Pinta, although its captain, Martín Alonso Pinzón, had already had a sculpture in his honour in a prominent space facing the sea since 1977.

The memory of that 1st March 1493 is also a cause for celebration in Baiona through a popular event that began as a local holiday in 1974 and which for a quarter of a century has become a great festival with a historical atmosphere and huge success. During the weekend closest to 1 March, the old quarter of the town travels back in time through a medieval market populated by musicians, minstrels, craftsmen, jugglers and other diverse characters. The usual programme of events also includes recreations related to the landing of Pinzón and his crew in Baiona and official celebrations.

The content and success of the Festa da Arribada has meant that since 2015 the celebration has been considered a festival of international tourist interest. That is why in this 2021 marked by the covid and the consequent restrictions, although in Baiona they have had to postpone the events that should be held at this point in March, they do not renounce to enjoy their festival and keep alive the memory of one of the great dates in history. The Arribada is already preparing to return next October.