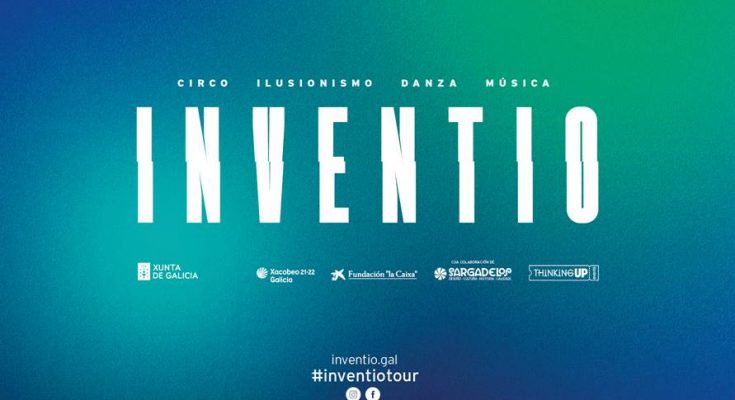 The premiere of the new show “Inventio” will take place from September, a tour to enjoy as a family that will travel throughout Galicia and selected locations in Spain and Portugal until January 2023.

This project was born as an initiative of Thinking Up Events, the Xunta de Galicia through Xacobeo 21-22, Fundación “La Caixa” and the support of Sargadelos. The main purpose of this proposal is to serve as a vehicle for knowledge and dissemination of the Camino de Santiago and Galician culture, and is also suitable for all audiences.

A function with a lot of personality

Inventio is a staging with echoes of futuristic cinema in a magical and avant-garde atmosphere, which praises the landscape, customs, art, music and architecture of Galicia. A team of dancers, circus artists and illusionists, under the creative direction of the young Galician Martín Varela and the playwright José L. Prieto, will act to capture this journey of the pilgrim’s internal transformation and search for the sensible.

Set in the year 2094, the mission of the protagonists is to recover the roots of Galician culture in the last Xacobeo of the century, when the Camino mysteriously disappears. However, Inventio is not based on the historical tradition of the Camino, but emphasizes the future generations that will mark the identity of Galician culture.

To create this dystopian universe, the creators of Inventio have been inspired by great stories such as “The Things To Come” (1936), by William Cameron Menzies and H.G. Wells, or “2001, A Space Odyssey” (1968), by Kubrick. The influence of Bob Wilson’s theatrical sets or the two “Blade Runners” by Denis Villeneuve and Ridley Scott can even be seen.

Inventio will receive all kinds of audiences, bringing viewers closer to the footprints of the Camino in Galician culture, as well as its influence throughout history on famous authors such as Cunqueiro, Cervantes, García Lorga and Valle-Inclán.

Tickets will be available on the website www.inventio.gal from Wednesday 6 April. The calendar of the Galician tour, not counting the dates and spaces of Spain and Portugal that remain to be announced, is as follows:

December 2 and 3: Municipal Auditorium of Ourense