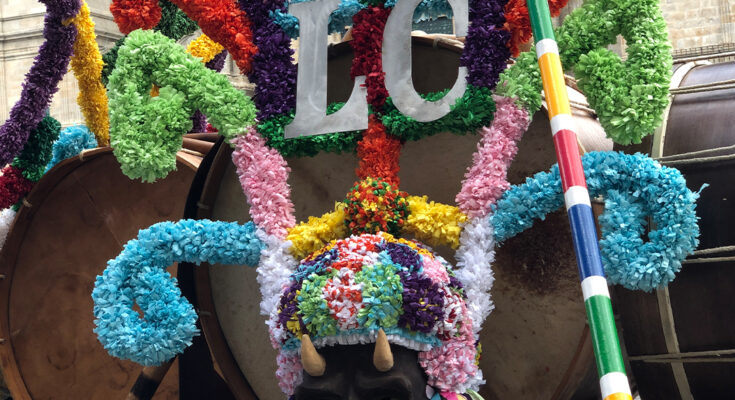 What a surprise tourists and non-tourists were with the multicolored revolution this Saturday. It’s not February, no, but this end-of-summer parade is a great way to get closer to the spirit of the most traditional Galician carnival. It almost becomes an invitation for us to go live the party on site in winter. In addition, it is a unique opportunity, which seems to be taken from a story, to see the different characters mixed (pantallas, galos, xenerais…), who also take the opportunity to catch up with each other.

The appointment was in the Obradoiro square after noon, where the music was already present from half past ten, warming up the atmosphere. The participants began to gather, dyeing color this somewhat cloudy morning, while the public crowded behind the fences.

From here, to the sound of bagpipes, drums and cowbells, the entourage departed. The itinerary would take her through the historic quarter: Fonseca and O Vilar streets, O Toural square and canton, Xelmírez street, Five streets, Preguntoiro street, Cervantes square, Acibechería street and Inmaculada square, until return to Plaza del Obradoiro, beginning and end of the festival.

And then, close to the facades of the houses, we were able to breathe closely the carnivals of Vilaboa, Verín, Viana do Bolo, Xinzo de Limia, Xenerais da Ulla, Volantes de Chantada, Bonitas de Sande, of the Vellaróns de Riós, of the Samede masks, of the Galos da Mezquita, of the Follateiros of Lobios and of the Madamitas and Madamitos of Entrimo. Each group, with a sign with their name, so that we would not confuse them. Everybody ready? Make way, the show begins!

A colorful tide flooded the old neighborhoods of Compostela, illuminating the stones and sparking laughter, dancing and the desire to carnival, and that no one was dressed up. The echoes of the music and the cowbells bounced off the arcades, infusing us with the rhythm of tradition.

The pantallas of Xinzo de Limia paraded with their noise, jumping to the sound of the noisy balloons that beat without stopping. Not ordinary balloons, but made from cow’s bladder. As if they weren’t making enough noise, the bells on the belts helped with the treble. The pantallas impose, with that mask reminiscent of a demon, the all-decorated coiled crest and the very colorful short cape. 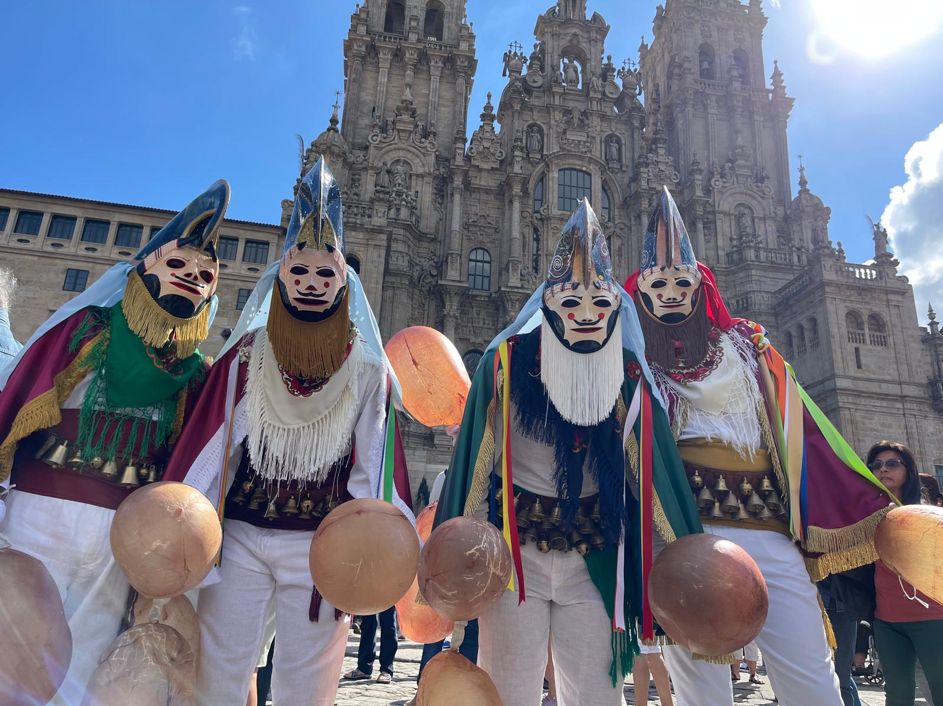 We were careful not to get too far ahead of ourselves when the cigarróns from Verín appeared, coming whipping around with the sheepskin (whip). With those painted masks and mitres, jumping with energy, these gentlemen with mustaches and ties also made a lot of noise with their belt bells, yes. 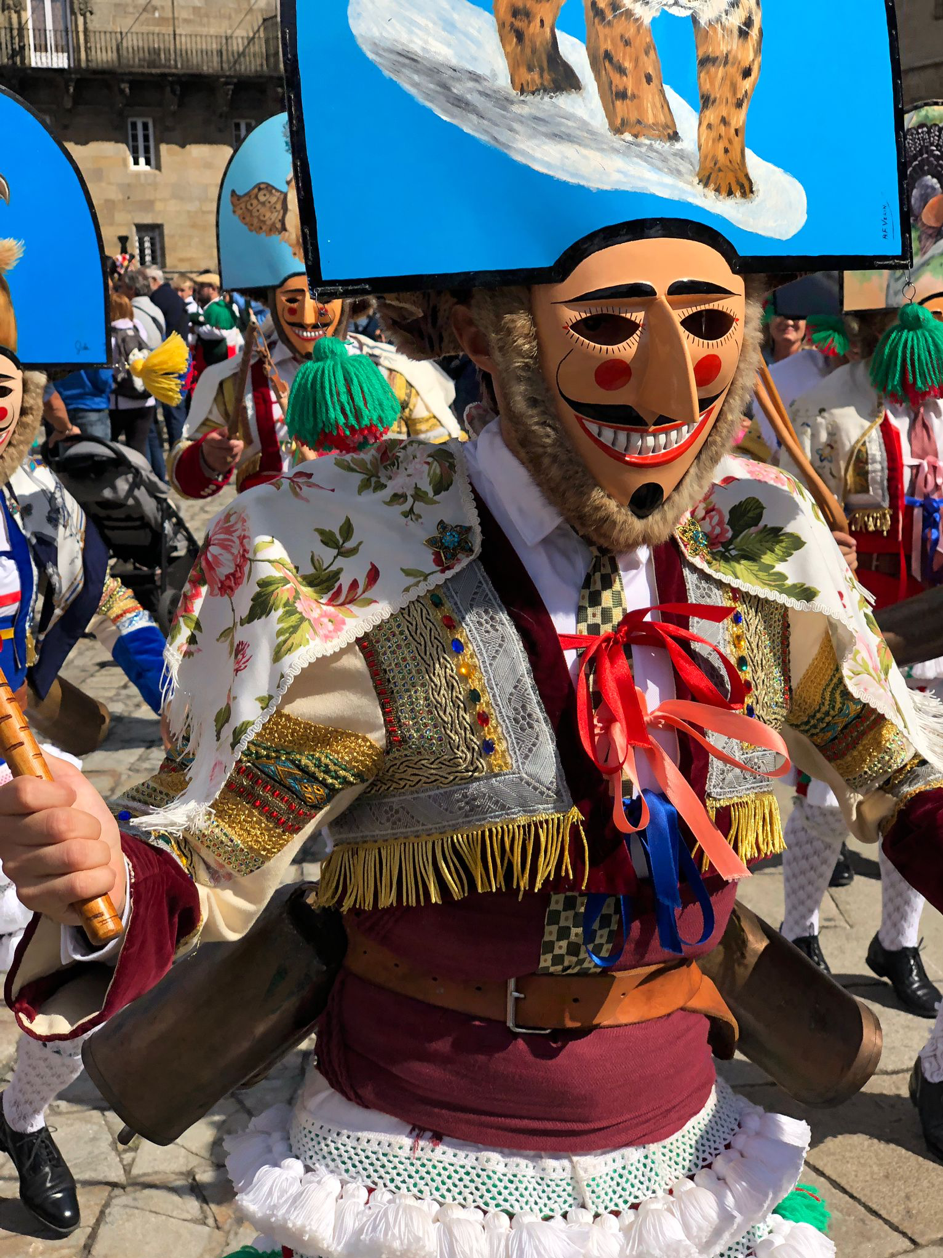 And then, that powerful sound of drums, where did it come from? Well, they were marking the rhythm of the group from Viana do Bolo, which celebrates one of the oldest carnivals in Galicia. O Bolo’s boteiros wore a scary dark wooden mask, in contrast to the multicolored costume and with a high headdress that drew colorful shapes in the air, made of wire, cardboard and colored paper. They also carried cowbells and a moca (cane) to make way for the folións (troupes). Wow did they jump! 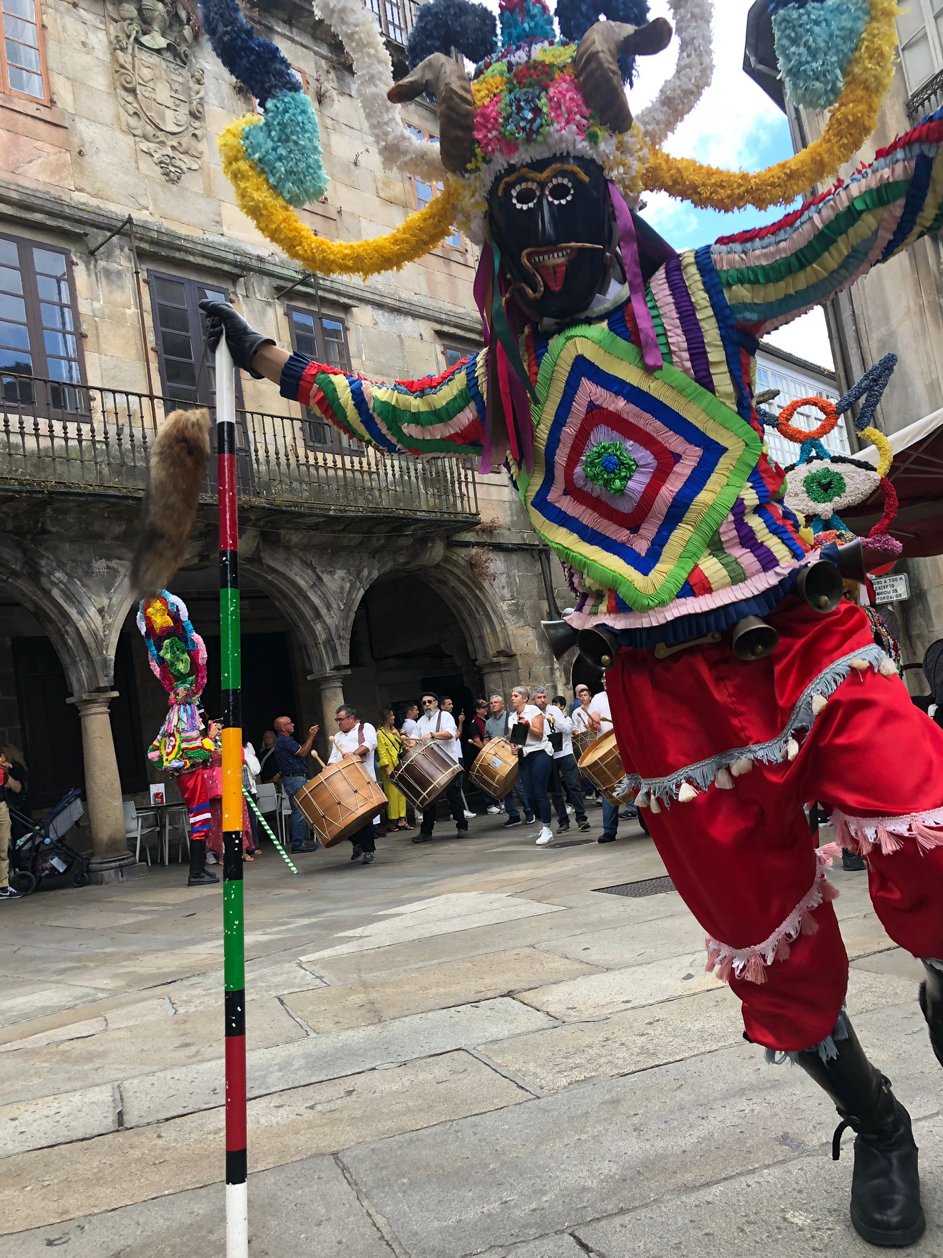 The Xenerais da Ulla rode solemnly through the historic streets of Santiago, fully immersed in their role. The hooves of the horses were already resounding on the stone of the Compostela soil, announcing them, and finally they arrived! Shiny braids, golden trimmings, swords, badges, medals… Many colored plumes, even peacock feathers on top of the hat, what a luxury. And the horses, adorned with their best carnival finery.

The ladies and gallants of the Cobres carnival, in Vilaboa, gave the parade an elegant touch. They were bare-faced and with many necklaces. The most spectacular, the hats, full of colored decorations (flowers, feathers, pieces of mirror…). Of course, you have to train to carry that weight on you…

There came a time when it was not known if there would really be people under the costumes. Who were these horned, fur-covered animals? They had to be the peliqueiros of the ribeirao carnival, who with a leather strap made way for the Volantes de Chantada. The volantes look like they are carrying an umbrella over their heads full of colored ribbons hanging from it, and with decorations on top. This volante is tireless, it turns and turns and jumps to the sound of the bells, like a whirlpool of color.

The Bonitas de Sande walked more calmly, walking to the sound of the bagpipes. They wore a very curious wooden hat, adorned with chicken feathers, handkerchiefs and colored ribbons. The masks were made of wire cloth, with the eyes, eyebrows, mouth and blushes painted on top. They completed the outfit with a shirt and tie, white pants and colored skirts, Manila shawls and black leggings with bells. And eye, they were armed with a wicker stick. They were accompanied by a cow and a bear.

“Vello, vello, vellarrón, mete os cartos no bolsón!” (“Old man, old man, old man, put the money in the bag!”), what a motto the Vellaróns de Riós carried on the banner. They made a very uniform set. All with their huge cardboard mask, with a big woolen nose and beard, and a suit with lots of colored ribbons and fringes, just like the hat. But be careful, they were hitting with the whip, so we should to keep the money well guarded, just in case…

Another group that was parading, from time to time stopped to dance. They were the máscaras de Samede, very elegant, with feathered hats and ribbons, Manila shawls and castanets, who danced the crossed doll while the vixigueiros or opponents, dressed in rags, walked around joking. The carolos also paraded, characters dressed in white with their faces covered with a basket and… a big bear!

We immediately guessed who the Galos da Mezquita were. They wore a mask with fringes, a multicolored suit, a cane and, most importantly, a hat in the shape of a rooster, of many colors. The slow walk, of gentlemen roosters walking with their canes, was suddenly altered by one of them, who encouraged the staff with a quiquiriquí and some races.

Of course, we must take note of the costumes of the Follateiros de Lobios, the most ecological and recyclable of all. They yellowed the streets, unmistakable, with clothes covered in follatos (corn leaves), and belts and bodices adorned with the pits of the cobs. Even the masks were made of cardboard with grains of corn glued in different colors. The most elaborate outfits even had matching foliate accessories: necklaces, bags… 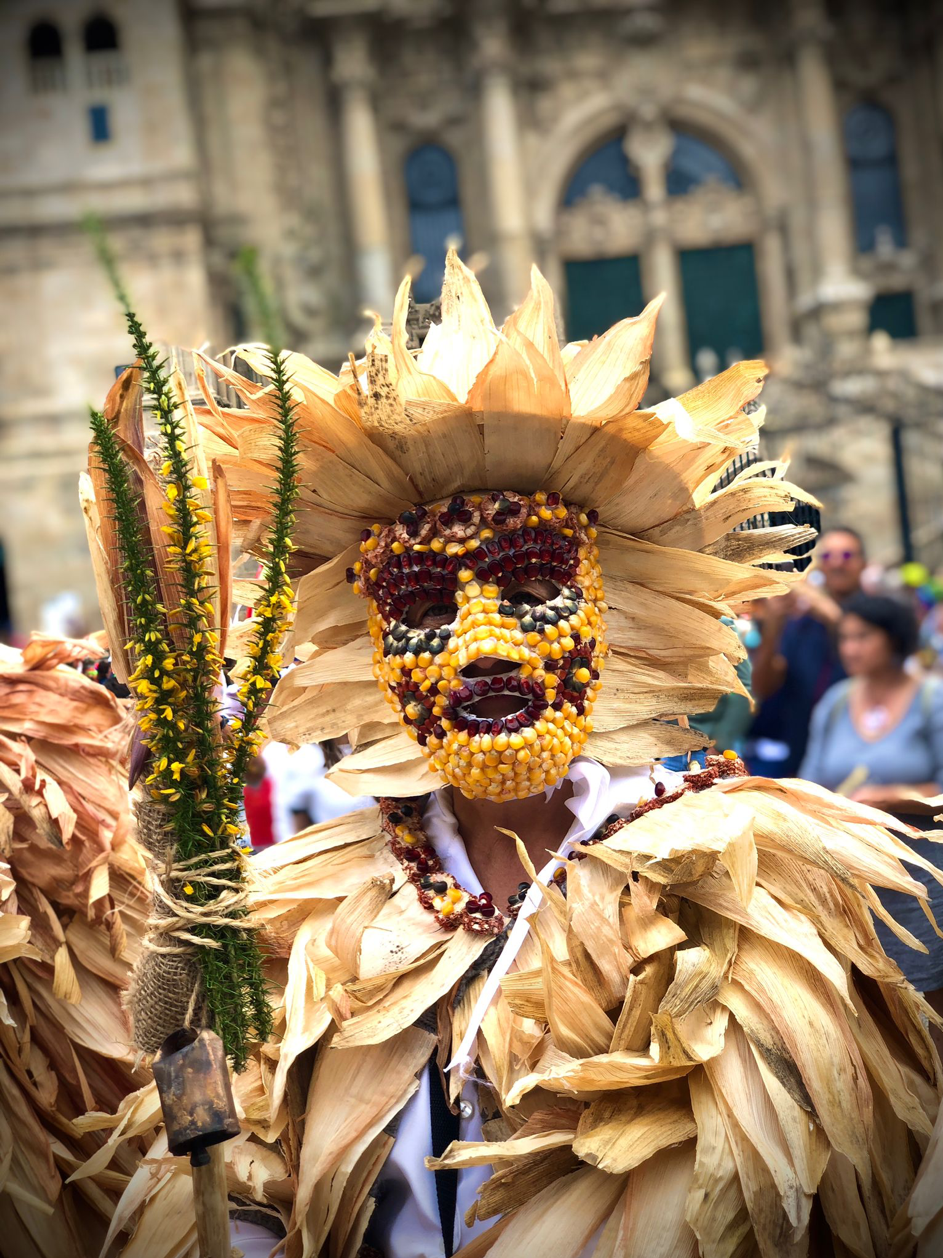 And a touch of glamor or, rather, a mockery of it, which is what the carnival is for, by the Madamitas e Madamitos de Entrimo. They with their white petticoats with embroidery and lace, straw hats with ribbons and veils, and white masks. They, to match, with a cone hat, colored ribbons and a cap on their shoulders. Very conjoined in white and red, it was nice to see them.

After more than an hour of traveling through the old part of Santiago, the most ancient figures of our carnival returned to the Obradoiro square, welcomed by a satisfied public that took the opportunity to take the last photos. Now, it’s time to regain strength to experience the carnival in February and then again in September. Until next year!