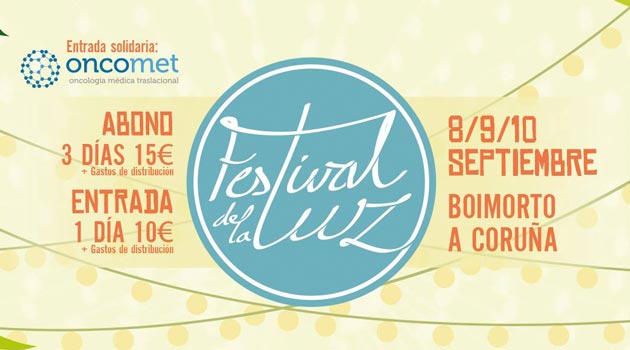 The Festival da Luz was born in the town of Boimorto (A Coruña) in 2012 as a result of the collaboration between the City Council and the singer Luz Casal. Such was the impact in its first editions that the tickets were sold out weeks before the event, thus arousing an important media interest, and that the ingredients augured a magnificent result, since everyone who attends proves that the atmosphere that is created is not that of a “normal” festival, but of something else.

We faced a unique and supportive experience in which Luz Casal invites us to her birthplace to enjoy an event that is practically unique in Galicia, exercising as an exceptional host. During the three days of the festival, music, gastronomy, live demonstrations, theater and culture come together in an unparalleled landscape where nature reigns, recycling, sustainability and innovation.

The festival, which this year reaches its sixth edition, will be held from 8 to 10 September, and will maintain the commitment of the organizers to further multiply their impact, their influence and their proposals. For this they will have a luxury line-up and whose collection will be donated to a cancer research and study association, Oncomet. That is why, as in previous editions, more than forty major national and international artists and new emerging bands will meet in Boimorto. Among the participants are well-known names such as Rosendo, Mago de Oz, Siniestro Total, Jarabe de Palo or León Benavente.

Another attraction of this festival is the market where every year companies and entities show to the public their best products and services. The main objective is that the public come in contact firsthand with the experiences that are offered. It is a space in which innovation, creativity and sustainability can accommodate all kinds of proposals.

There is also a children’s area of ​​over 5,000 square meters for the small festival, with continuous programming of workshops, inflatables, storytelling, magic and theater. It is, with this, that all the public have their space in the Festival da Luz, making of it a familiar event. In addition, there will be a free bus service that will connect the area with the center of Boimorto, so that those who decide to camp during the three days of festival will access more easily to supermarkets, ATMs, pharmacies and other services.

As a novelty, this year the festival presents a tent dedicated to the cinema where movies and documentaries related to music will be screened throughout the weekend.

And all this for a symbolic price of 10 euros per day or 15 for the three full days, with a purely solidarity, as we have already mentioned (only last year managed to raise 101,000 euros for the NGO Oxfam Intermon).

This has begun a path in which the culture, social commitment of the Galician business community and the public share a unique and extraordinary common space. And in addition, every year, Luz Casal continues to realize her dream: to give back to his native Boimorto the gift of a whole childhood there.