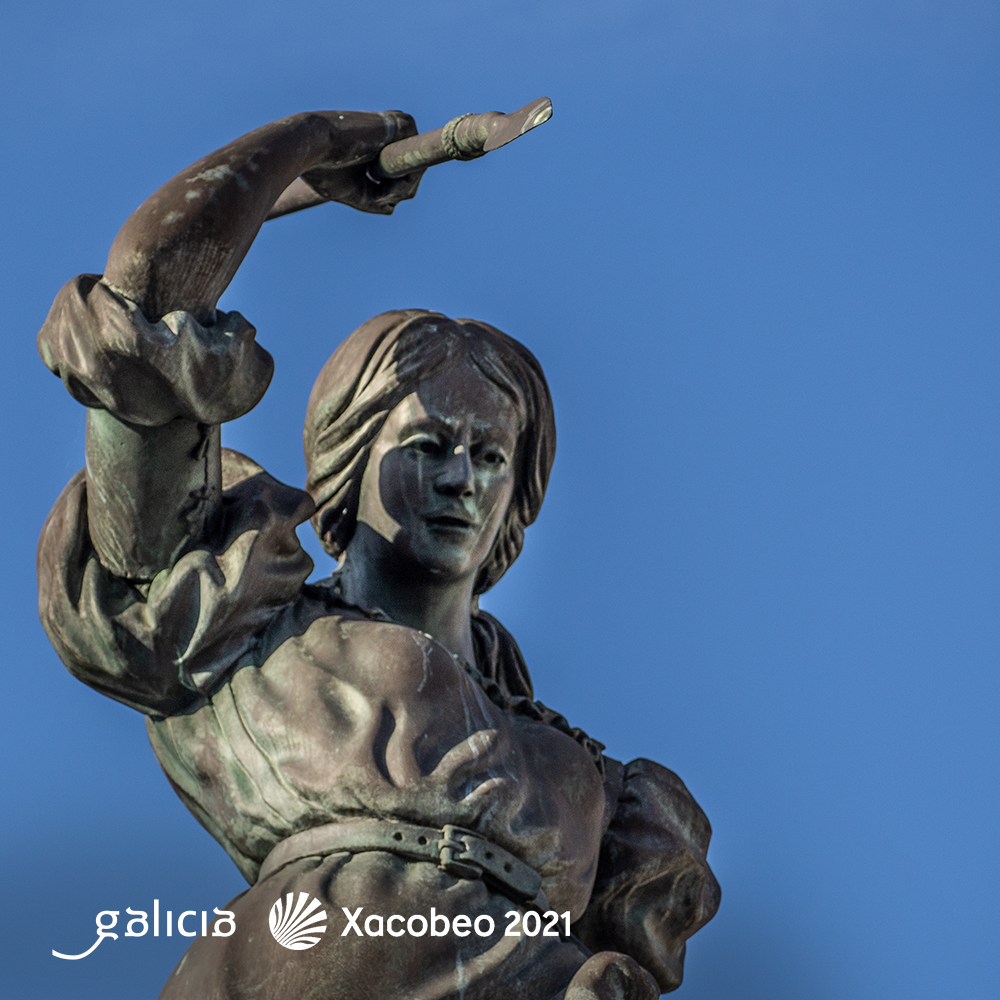 Women have traditionally occupied the margins of history books and their lives and achievements have often been forgotten or silenced. But the memory of some of them has managed to break through the mists of time to give us a glimpse of stories and trajectories capable of awakening our astonishment. What better way to celebrate the 8th March than by remembering eight Galician women who played a leading role in history centuries ago.

There is little certainty about her identity and origins, but the most widely agreed thesis is that this pilgrim and writer who lived in the 4th century was born in the Roman province of Gallaecia, which covered the current territories of Galicia, Asturias, Zamora, León and northern Portugal. Her importance lies in the fact that he made a journey from Europe to Jerusalem between 381 and 384 and, above all, in the fact that he left a written record. His “Itinerarium ad Loca Sancta”, the volume in which he gives an account of various aspects of the places he visited and the people he met, is considered to be the first travel book written in the Peninsula.

Her job as a “soldadeira” (a woman who sang and danced with the soldiers during war campaigns) and the satirical testimonies left of her by the authors of several cantigas have distorted the echoes of this woman, born in the municipality of Coirós in A Coruña in the 13th century, which have survived to the present day. But at least they have allowed us to know that María Pérez, A Balteira, frequented the courts of the monarchs Fernando III The Saint and Alfonso X The Wise, was in the Crusades and even took part in some secret negotiating missions with the Arab warlords in the south of the Peninsula. The cantigas emphasise the more frivolous aspect of her existence, but they also describe a woman of character who broke with the established rules.

María Castaña, a popular expression to refer to very distant times, was a woman to whom the history books have not done justice either. It is known that she led a popular revolt in 1386 against the abuses suffered by the peasantry at the hands of the bishopric of Lugo, according to the most accepted theory, or against the feudal lords who wanted to dispossess them of their lands. Some also maintain that he may have taken part in the territorial disputes of the time with the Portuguese monarchy, although the oldest document in which he is mentioned only refers to the crimes he may have committed against the Church of Lugo and the fine imposed on her.

This resident of Cangas, tragically tried and condemned by the Inquisition, is a symbol of the injustice which, like her, was suffered by other women of the time. Her misfortune is directly related to the attack that the town suffered in 1617 by Turkish pirates and the poverty that caused. Under a false accusation of witchcraft, she was arrested and, after obtaining her confession through torture, she was stripped of all her property and the rights she had over the economic benefits of the churches of Aldán and Moaña.

Raised to the rank of heroine and great protagonist of A Coruña’s history, María Pita (her real name was Mayor Fernández de la Cámara e Pita) owes her fame to the role she played in defending the city from the attack by the English troops commanded by Francis Drake in 1589. According to the chronicles, after several days of siege, the invaders managed to open a breach in the walls of the Old City to face a defensive contingent made up of soldiers and neighbours, including many women. María Pita confronted an English ensign carrying a flag, and after snatching the ensign from him, she led the successful counter-offensive in A Coruña with the cry “Quen teña honra, que me sigue” (he who has honour, let him follow me).

Isabel Barreto de Castro, born in Pontevedra and emigrated to Peru when she was still a child, is part of the history of world navigation for having been the first woman to hold the post of admiral. Married to the navigator Álvaro de Mendaña, Barreto accompanied him on the expedition that he began in 1595 to the Solomon Islands, an archipelago that Mendaña had discovered almost three decades earlier. In the course of that second voyage they discovered the Marquesas Islands before reaching their destination. Once in the Solomons, Mendaña fell seriously ill with malaria and before he died he decided to appoint his wife as governor and her brother, Lorenzo Barreto, as admiral of the expedition. But Lorenzo’s death a few days later after being hit by a poisoned arrow forced Isabel to take on the admiralty as well. Now in charge of the expedition, she would set sail for the Philippines, where she would remarry and from where she would organise a new voyage to America.

In few cases is it so difficult to distinguish between legend and reality as in the case of Pepa A Loba. Her existence is deeply rooted in popular culture, although her presence in different places all over Galicia and the different behaviours that the stories stored in the collective imagination attribute to her (cruel and vengeful, in some cases, and compassionate like Robin Hood in others) make it doubtful whether there was only one Pepa A Loba or whether the myth we know today is the sum of several different bandoleras. Concepción Arenal mentions her in a letter when talking about her visits to the prison in A Coruña, but little else is known about her. The most widespread account says that she owes her name to the fact that she stood up to a wolf when she was still a child herding sheep.

Her proximity in time, her capital importance in the resurgence of Galician culture and her literary legacy make the figure of Rosalía de Castro the best known, studied and disseminated of all those who make up this short list. Proof of her importance is the fact that the heads of the Royal Galician Academy decided to adopt 17 May as Galician Literature Day in commemoration of the date (17 May 1863) on which one of Rosalía’s greatest works, “Cantares gallegos”, was published. The landscapes and their people, the pride in what is proper and the denunciation of injustice and poverty are some of the themes that run through the poet’s verses and which means that her legacy continues to flourish almost a century and a half after her death.