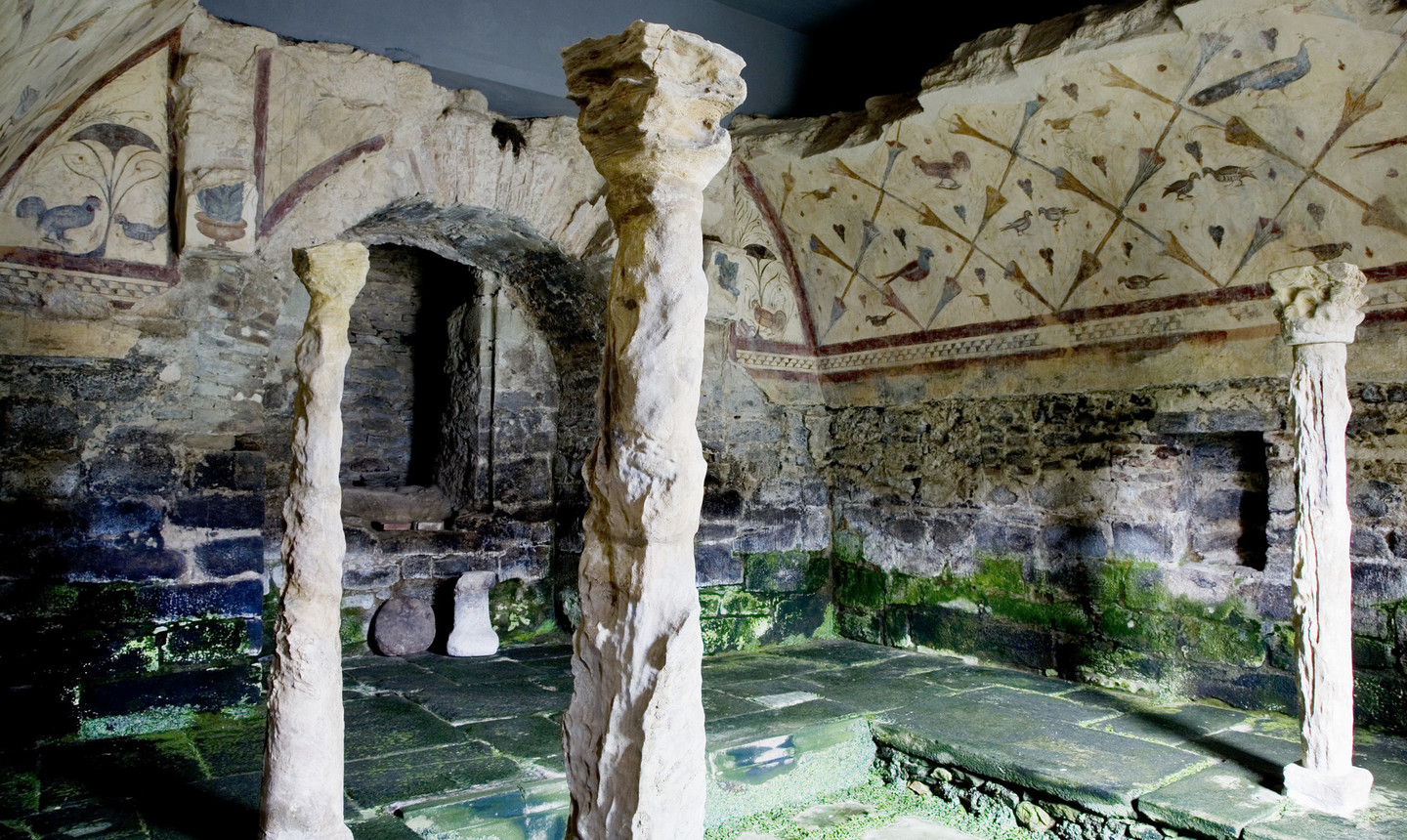 In Bóveda de Mera, a small rural town in Lugo, you will find one of the most enigmatic monuments of Galicia’s cultural heritage: The underground monument of Santalla de Bóveda. It was discovered by the local parish priest, José María Penado, after studying the factory books of the present church and digging a hole under the atrium to find the old construction. However, it was not made public until 1926. After several excavations, restorations and studies, it was declared a National Monument in 1931 and an Asset of Cultural Interest in 1985.

In your visit to this half-buried building, the first element you will come across will be its frontage, which consists of a porticoed hall flanked by two pilasters that conserves two columns made up of granite drums. The most extraordinary of this group are the reliefs with varied themes, such as representations of birds and human figures surrounded by plant motifs.

Once you pass under the horseshoe arch, considered one of the oldest in the Iberian Peninsula and even in Europe, you will discover a room with a floor plan divided longitudinally into three spaces separated by arcades. Everything is covered by a semicircular vault with very realistic pictorial decoration, which again shows bird figures with colourful vegetal, floral and geometric motifs. Also striking is the rectangular pond that opens in the center of this main room.

Its construction and ornamental elements give the Temple a unique character in Western Europe and complicate the determination of its origin and purpose. The basilical shape of the plant and the triumphal arch, as well as the figure in relief of a fish and grapes, led the first researchers to determine that it was a temple of the first centuries of Christianity. The discovery of other pictorial elements such as the painted chess band in the main room contested the first hypothesis and raised the possibility of pagan alternatives.

Thus, since 1926 various original purposes of the temple of Santalla de Bóveda have been suggested, such as a pagan temple dedicated to nymphs, a bathing place, a martyr’s church dedicated to Prisciliano, a temple dedicated to Isis or a funerary monument. A wide range of possibilities created from details that you will be able to assess during your visit.

If, after analysing this sanctuary, your archaeological vein awakens, you can go to the city of Lugo, less than 15 kilometres away, to visit its Muralla Romana and find out about its history.