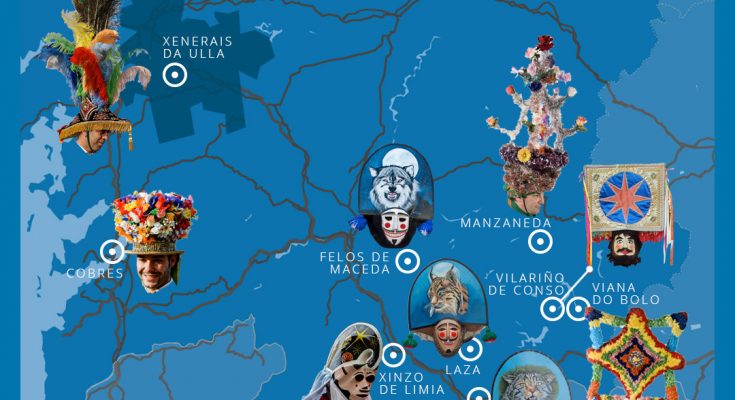 Although due to the health situation, carnivals this year flee from big celebrations and focus on a more spontaneous and traditional Entroido, we do not want to miss the opportunity to talk about this festival with deep roots and tradition in Galicia.

In Galicia, the carnival (o entroido) has a long tradition. The shortest version goes from Carnival Sunday to Ash Wednesday. But there are places where it seems that he knows little. For example, in Xinzo de Limia, Verín or Vilariño de Conso the festival lasts… up to five weeks! And in Laza, it even starts with the year, since after the chimes the first pageant comes out.

The festivities have common elements, with variations, such as fareleiros days, throwing flour, the bordalleiros, throwing rags, or the burning of mecos, or lardeiros (carnival dolls) with the auction of the entroido and, of course, the brass bands, parades… Each site has its typical characters.

It is celebrated throughout the community, although the province of Ourense is the undisputed queen. In it is the «magic triangle» that includes the municipalities of Xinzo, Laza and Verín, with an ancient tradition of rural carnival. Let’s take a tour of the most famous entroidos, all of them very interesting (Galician festivities of tourist interest and international interest, Xinzo de Limia, and national, Verín):

Xinzo de Limia (Ourense). It is one of the longest. The big day is Shrove Tuesday. It’s a very complete party: festivals, parades, brass bands… Of course, you have to go with your costume on, otherwise it ends badly. The protagonists are the pantallas, which traditionally rise with the sun and retire with the sunset. The clothing consists of a white shirt and shorts, black leggings and shoes, a red or black cape, a sash with bells and a scarf and, most importantly, the mask (the pantalla), with the face of a demon and a colored crest, and the balloons of animal bladder that sound when colliding with each other.

Verín (Ourense). Here the entroido is directed by the cigarróns, with an attire similar to that of the peliqueiros. They say that more than anything the difference is in the rhythm and movement that they carry. The cigarrón comes out for the first time on January 17, at dusk, at the «Festa do Chourizo de San Antón de Ábedes», to warn that carnival is near. And then will come Corredoiro Sunday, Comadres Thursday… and everything else.

Laza (Ourense). Typical of Laza is the Friday of the folións (night troupes that play to scare away evil spirits), Boralleiro Monday (with throwing of rags) and the descent of the Morena (a kind of satyr with the head of a cow that comes down from Cimadevila loaded of gorse and ants for everyone). But the protagonists are the peliqueiros. They wear a painted birch wood mask and aluminum miter, and a pelica (animal or synthetic skin) covering the back of their heads. They wear a white shirt, a tie, a jacket with ribbons, a girdle, stockings, a belt with cowbells and a zamarra (whip).

Viana do Bolo (Ourense). The official name is «Festa da androlla e o entroido», with which we see the importance of the feast, present throughout the carnival. The protagonist is the boteiro, who wears a mask and a very high headdress made of wire and cardboard with colored paper and a suit of colored silk ribbons. The boteiro announces and gives way to the folión, jumping with his monca (decorated stick). The foliones are groups of thirty or forty people with drums and farming instruments. They also wear belts with cowbells. With the racket they make, they scare away evil spirits.

Vilariño de Conso (Ourense). In this festival, the big day is Saturday, with the parade of the fulións, with a kid party and everything, Fat Sunday and Tuesday, with the burning of the lardeiros. Here there are also comparsas, boteiros, fulións and fuliadas, satirical theatrical performances that involve the entire staff.

Cobres (Santo Adrián and Santa Cristina, Vilaboa, Pontevedra). The party goes from Saturday to Tuesday, this being the big day, with dances in the morning and games in the afternoon. In Cobres they are very elegant, since the characters of the carnival are the madamas and the galáns. They go bare-faced and, the most characteristic of the clothing, are the necklaces and, above all, the hat, full of colorful decorations: flowers, feathers, dolls, pieces of mirror… To wear all this you have to walk well of the cervicals. It is a very participative and folkloric carnival. They even have their own dance: Os Cobres Dance. There are also secondary characters, such as the villagers, those in white, the weepers, the preacher…

Os xenerais da Ulla (region of Ulla, A Coruña-Pontevedra). It is celebrated in nine municipalities for a long week. The xenerais (generals) and the correos (couriers) go on horseback, with their faces uncovered, dressed in highly decorated uniforms. The blockages or stops are peculiar, diatribes between commanders of different sides on current issues, with a lot of irony, of course.

Manzaneda (Ourense). In the «Folión Tradicional do entroido de Manzaneda», the mázcaras, without a mask, by the way, are the ones who run the show. They wear a hat with a huge colorful headdress, a cane, boots and cowbells. They are excellent dancers. Not miss the dance of the mázcara on a box to the beat of the folión.

Maceda (Ourense). The party is the «Entroido dos felos de Maceda». The costume of the felos is similar to that of the peliqueiros and the cigarróns, but they wear black stockings and a fox tail on the mask, necklaces, a cane belt with five cowbells, and boots. Traditionally the position is only valid for single men.

Apart from these famous entroidos, we can point out those from A Pobra do Brollón (Lugo) with its Bear from Salceda, the piñata Sunday from Vilanova de Lourenzá (Lugo), the entroido ribeirao from Chantada (Lugo), the Ravachol from Pontevedra, the one from A Coruña with the choqueiros, the one from Vigo and the merdeiros…

And let’s not forget that with so much party you have to feed the body. The dishes for the occasion are lacón con grelos, cachucha, androlla, in general everything that has to do with pork. That’s where lardeiro Tuesday comes from, because, like Mardi Gras, it refers to the lardo or bacon fat. And, of course, the sweet touch: bica, filloas, orellas, flowers and, the almost forgotten, lemon leaves. And to top it off, xastré (typical liqueur from the Verín region), coffee liqueur or queimada.