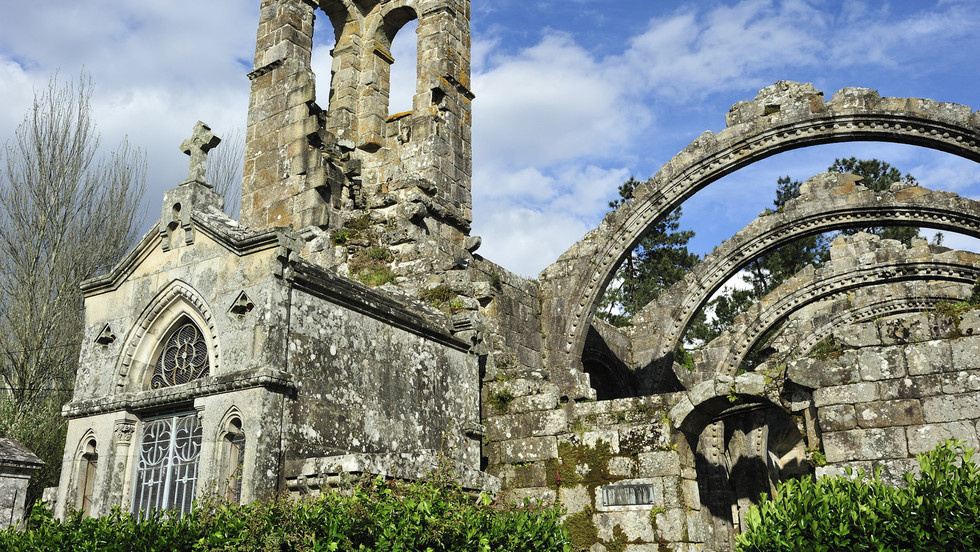 “The most melancholy cemetery in the world.”

Although cemeteries are the ultimate destination for many, they are also – at times – areas of special attraction for those who like to walk among pantheons, admire the art that adorns them and of course, pay their respects to the deceased. Beyond the graves, some cemeteries are places of great architectural and historical value due to the legacy of their walls and stones, such as the ruins of Santa Mariña Dozo in the Pontevedra municipality of Cambados.

On top of a 12th century Romanesque chapel, D. Lope Sánchez de Ulloa built the church of Santa Mariña Dozo which was restored and enlarged by his daughter María de Ulloa in the 15th century, are today an authentic open-air museum.

The church has a single nave divided by four transverse arches that attract attention from afar. In addition to the five side chapels, the sacristy and the main chapel. Once inside, pay attention: oe of the arches represents one of the seven deadly sins – the sloth – while in the chapels iconographies of biblical scenes such as the Visitation, Christ, the expulsion from paradise and again, the deadly sins stand out. Of course, it’s not a place we can visit without time. Take everything you need and you won’t miss a thing.

Declared a National Monument in 1943, it was abandoned for political and religious reasons back in the 19th century and the parish church was moved to the convent of San Francisco. Since then it has continued to function as the parish cemetery and is known today as ‘the most melancholic cemetery in the world’, in the words of Álvaro Cunqueiro.

Later, in 2014, the Ruins of Santa Mariña Dozo were recognized as one of the two most important funerary monuments at a national level, in addition to being included in the Association of Significant Cemeteries of Europe. A recognition that proposes to the villa cambadesa within a cultural alternative that, through a network of cities, offers guided visits to their cemeteries and informs of the importance of the European funerary heritage.

After the visit, finish the day climbing up to the mountain of A Pastora to see how the sun goes down and Cambados is dyed red and orange, it is a wonder. There you will find the Capela da Pastora, where every year a pilgrimage is held in honour of the Virgen de la Pastora.