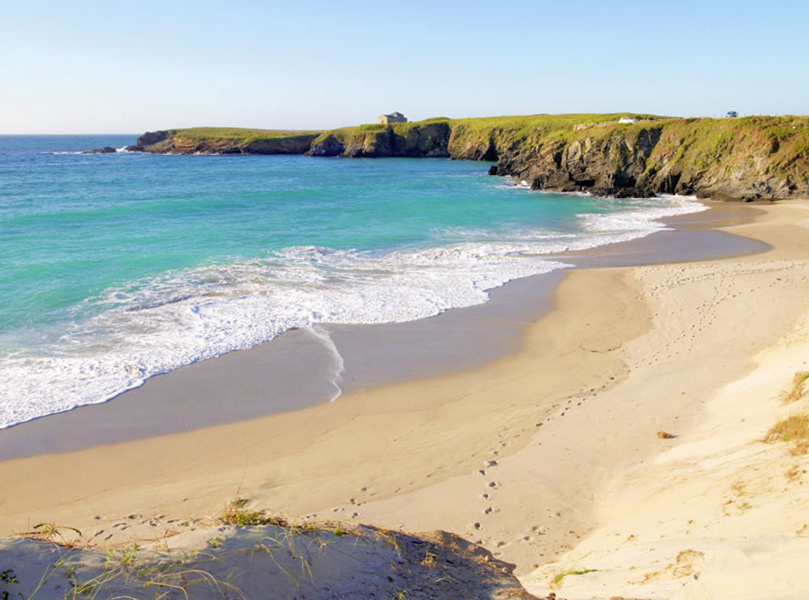 Located in the unicipality of Ferrol, in the parish of Covas, the Hermitage of Santa Comba and the beach to which it gives its name are incredibly beautiful, and have a long history and tradition among the people of the parish. The first thing that attracts attention is the fact that the hermitage is located on a small island close to the coast. This island, which ends in a cliff, is known as the “Ínsua do Medio” or “Ínsua da Santa”. The only way to get to the upper part of the island, where the hermitage is located, is by climbing recently rebuilt stairs that can only be accessed at low tide.

The area of the island has a long history, of which the hermitage is part. In the place there was a castreño settlement, which later was dominated by the Romans (along with all of Gallaecia). They built a temple, which was later Christianized and turned into a church. After the Muslim invasion, at the time of the repopulation, the church was renovated. The first written reference to the hermitage dates from 1110, and there are records that it underwent various reforms in the 13th (incorporation of the Mudejar arch) and 16th centuries.

There are many legends related to the hermitage, most of them framed in the theme of the arrival of holy people on pilgrimage to the coast. These beliefs are accentuated by the presence in the area of stone sarcophagi, possibly from the castreño period, which according to superstition are the stone boats in which these saints arrive. Near the hermitage, there is a kind of stone trough that is traditionally identified as the boat in which Santa Comba arrived. Another legend says that Santa Comba was a sorceress, who repented and confessed, retiring to pray with her son in the chapel until she obtained God’s forgiveness. It is also said that one day a carving of the Virgin of Comba, who is the patron saint of Covas, appeared on the beach and is kept in the New Church of the parish. Another story tells that some fishermen invoked the saint to save them from a storm, and then built the hermitage as a way of thanksgiving.

The saint also named the beach next to the hermitage, the beach of Santa Comba. It is a sandy area one and a half kilometres long, with beautiful dunes. Santa Comba is a windy beach with strong waves, ideal for surfing and water sports. The beach is almost never very crowded, because it is in a rather rural area. The Ruta da Costa Ártabra, a hiking route that crosses the municipalities of Ferrol, Narón and Valdoviño, runs along the beach. On the left bank of the beach is Cape Prior, traditionally dangerous for boats. The shipwreck of the English Highland Warrior in 1915 was historic, when it collided with the “Cabalos do Prior”, some pointed rocks near the cape.

The beach of Santa Comba, due to its location, has an almost virgin nature, and a great predisposition to water sports. These, plus the cultural attraction that is the hermitage (maintained today by the village of Covas), gives rise to a perfect excursion to the North.