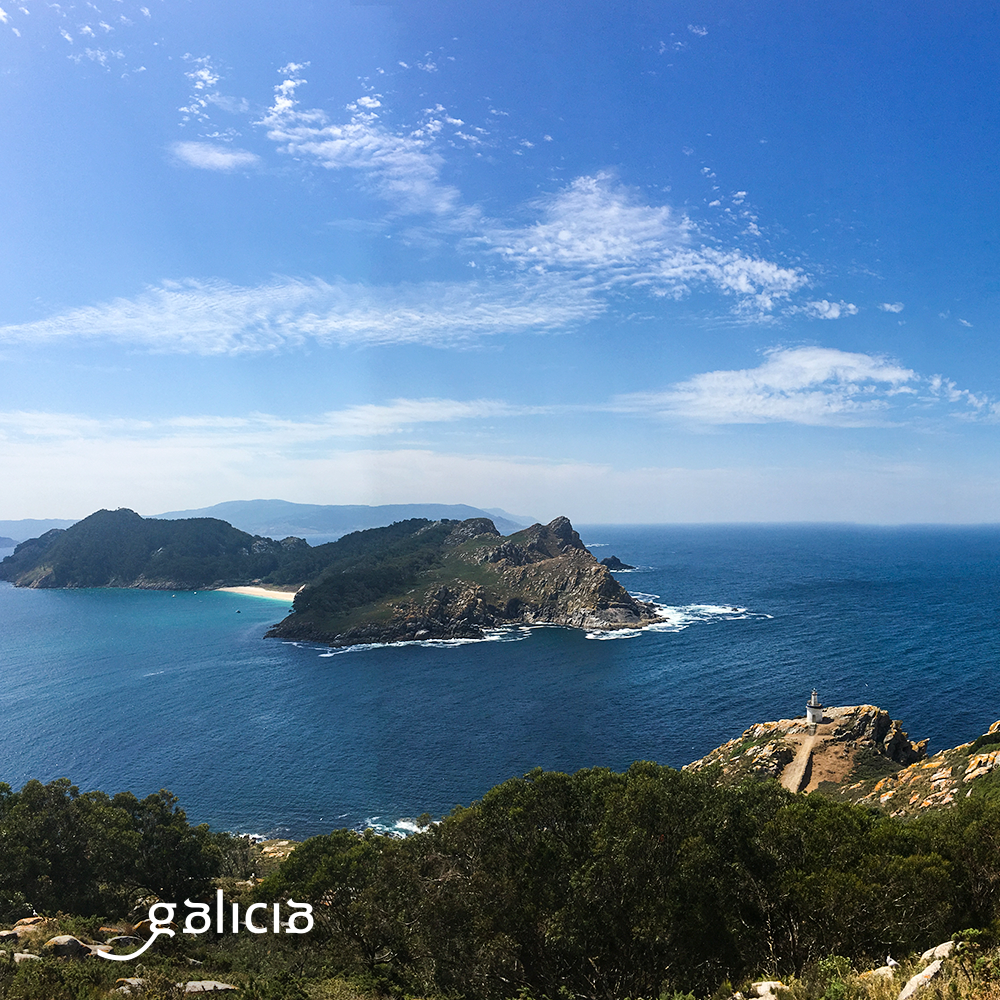 In Galicia we have almost 1,500 km of coastline protected by islands and islets. Today we will take you to know the ones that make up the Maritime Terrestrial National Park das Illas Atlánticas of Galicia, the first and only space with this category in the Galician community and the second in national territory. Its own ecosystems of the coast and the Atlantic seabed were the main reason that in 2002 these islands were declared a National Park.

Cortegada, Sálvora, Ons, Cíes and the maritime space that surrounds them are part of this protected space.

The Romans knew it as the island of the gods, and it is true that here are hidden true treasures of nature. We will see landscapes of steep cliffs, and protected seabed of exceptional wealth, where unique species inhabit and where we can find one of the best beaches in the world, known as Playa de Rodas.

Crystal clear waters and fine sand surround the most humanized part of the archipelago. But there is certainly much more to see here. The Lighthouse route is the best known, as it offers some of the most spectacular views of the Vigo estuary.

This island, which allows a maximum of 1,600 – 1,800 daily visits, offers camping area for those who want to enjoy this paradise for more than one day.

In order to tour Cíes you will need a permit from the Xunta and book, in case you decide to camp, your stay at the campsite here.

More information about this island, here.

Presiding over the entrance to the Pontevedra estuary we find the best known sister of the Cies, the Island of Ons.

If you like walking, we recommend you try a couple of hiking trails where you will discover the best kept secrets of this island. The Southern Route will take you to Laxe dos Cregos, a medieval anthropomorphic sarcophagus full of legends, but you will also ascend to the Fedorentos viewpoint, from where you will find an incredible panoramic view of the island of La Onza, the Illas Cíes, the Costa de la Vela and the Aldán estuary. And following the path you will reach the famous Buraco do Inferno, a 45 meter deep geological formation that has created the sea after years of scourges.

Do not leave without visiting its lighthouse but also its beaches: Melide, Canexol, Pereiró, Dornas…

The maximum number of visits allowed per day here is 1,200 – 1,300 people, and to access the island you must request a permit from the Xunta. As it also has a camping area you will have the opportunity to book here.

You will find more information about Ons here.

Perhaps it is the least known of all the islands that make up the Terrestrial National Maritime Park of the Atlantic Islands, but no less important. Sálvora can boast flora, fauna, historical heritage and legends. Located at the entrance of the Ría de Arousa, it presents a soft landscape where beaches, dune areas and bowling predominate, small granite blocks that you can see all over the island.

In 1770, the first Drying and Salting Fish factory in Galicia was built on this island, which would be known as “O Almacén”. And from the work in the factory, the village was born, which had about 70 inhabitants permanently installed on the island. There is currently an established route that leads to the nucleus of houses but can only be done accompanied by an authorized guide.

The maximum number of daily visitors is around 200 people.

When there is low tide you can almost get there on foot. Located about 600 meters from the coast of Carril, is Cortegada, known as the floating forest because of the great vegetation it has. And here we can find a botanical rarity that is visited by experts from around the world, a park of laurels.

But there are many more things to see, such as the Hermitage of the Virgen de los Milagros, from 1652. It is said that it attracted many pilgrims for its healing benefits. From this point the 2 circular routes leave from which you can discover all the natural treasures that the island hides.

The maximum number of daily visitors is 250 people.

HOW TO VISIT THE ISLANDS

To be able to visit any of the 4 islands you will have to access by private boat, requesting a navigation permit and then the one for anchoring. In the case of Cortegada and Sálvora do it in advance since only a maximum of 15-20 anchors are allowed daily.

The other alternative to visit any of the archipelagos is to get in touch with the shipping companies that organize guided tours.

In addition, among the activities you can do on the 4 islands is diving, which also needs a special permit.

And if you’ve been wanting to know more about the Maritime Terrestrial National Park das Illas Atlánticas of Galicia, you’ll find all the information here.