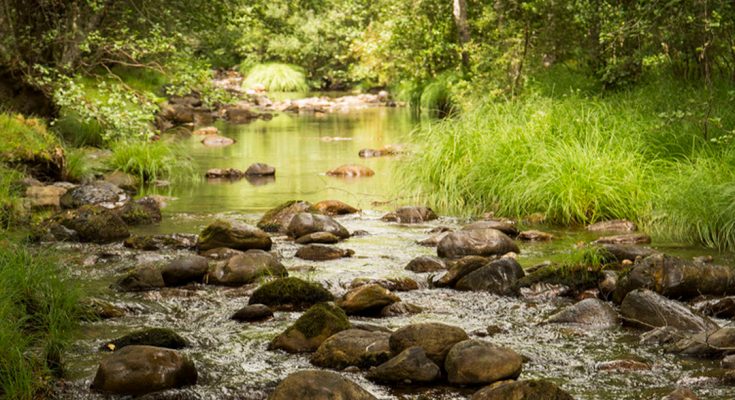 Galicia has six Natural Parks and one National. These protected areas, in addition to being vital for the environment, are the best destinations to disconnect from urban life and enjoy our nature. Let’s see what they offer us.

As Fragas do Eume extend over 9,125 ha in the Eume region, through the municipalities of Cabanas, A Capela, As Pontes de García Rodríguez, Monfero and Pontedeume.

Here, the Eume flows in its final section, forming a canyon surrounded by forest. This is the best preserved coastal Atlantic forest in Europe, in which oaks, chestnuts, willows, strawberry trees, elms and birches predominate. Among the small flora, moss and fern, of which up to 28 species persist dating back to the time of the dinosaurs. We can see wild boars, martens, yew trees, owls…

Among the fragas we find the monastery of Caaveiro, that of Monfero and the medieval bridge of Santa Cristina. The Park has eight hiking trails, interpretation centers, an ethnographic museum, boats, viewpoints, suspension bridges, recreational areas and, in case we are short of breath, bus service.

Corrubedo dune complex and Carregal and Vixián lagoons are located between the Arousa, Muros and Noia estuaries, in the municipality of Ribeira. It covers 996 ha.

In it we find the largest mobile dune in the northwest of the peninsula. You cannot step on the sand, because of conservation, but you can walk along the paths  in the park. The sands that we can step on are those of the beaches of Ladeira and Vilar, which go next to each other, next to the dune.

In the park there are also the Vixián lagoon, with fresh water, and the Carregal lagoon, with salt water. The wetlands are home to more than 250 plant species and a wide variety of fauna, especially waterfowl, which have their own observatory. In addition, there are two viewpoints: A Pedra da Rá and O Castro da Cidá. In the area there are remains of castros, mills and tile ovens from the 19th century.

And let’s not forget that the legendary city of Valverde is located here, submerged under the sand and the sea, and the reason for fantastic stories of kings, princesses, Moors… and even the Apostle.

O Invernadeiro is in the municipality of Vilariño de Conso, in the province of Ourense. It extends through the mountainous area to the south of the Massif Central, crossed by the Ribeira Grande and Ribeira Pequena rivers, occupying 5,722 ha.

The landscape is rich in forests of oak, holly, alder, ash…, riparian forests in the valleys and low vegetation, such as scrub or fern. Species that make that seasons paint different colors. Many animals make their home here: roe deer, deer, golden eagles, eagle owls, trout…

The park offers six hiking trails, a Nature Classroom and an Ichthyologist Center. Among the human heritage of the past: mills, coal neighborhoods, remains of the Papelera Española…

Baixa Limia-Serra do Xurés is the largest Natural Park, with 29,345 ha. Together with the Peneda-Gerês National Park, it forms the core of the Gerês-Xurés Cross-Border Biosphere Reserve. It extends along the “dry line” with Portugal, in the municipalities of Bande, A Vila, Muíños, Lobios and Calvos de Randín.

Being so large, there is a bit of everything: lots of mountains, rivers, reservoirs, hot springs, heaths, peat bogs, rocky outcrops and forests. The area’s climate, somewhere between oceanic and Mediterranean, favors a strange variety of plant species, such as the agarero. Late in spring, the Xurés lily blooms, in danger of extinction.

There are numerous megalithic monuments, castros, and Roman remains, such as the milestones of the Vía Nova or the Aquis Querquennis Camp, in Bande.

Characteristics of the area are the granitic bolouros, of glacial origin, also present in the middle of the villages, such as in Salgueiro, the first environmental village in Galicia.

To make the most of your visit, we have eleven viewpoints and eleven signposted routes.

Serra da Enciña de Lastra is in the Valdeorras region, and occupies 3,152 ha. The name refers to a large tree that served as a guide for travelers. Here are the highest peaks in Galicia, such as Pena Trevinca or Cabeza Grande de Manzaneda.

With so much mountain it is ideal for caving, mountaineering and skiing. There are more than a hundred caves, here called “palas”, such as A Zorra, the largest, or A Campá, famous for its echo. And lots of bats inside them. Another curiosity of the area is the presence of calcareous rocks.

It houses the largest nesting community in Galicia. As for the flora: willows on the banks of the Sil, chestnut groves surrounding the villages, and mountain scrub, with Mediterranean species such as oregano or thyme.

It has nine viewpoints and ten prepared and signposted paths.

Monte Aloia, which some say is the same Monte Medulio, was the first to receive the title of Natural Park of Galicia, in 1978. It is the southernmost peak of the Serra do Galiñeiro, and belongs to the municipality of Tui . It has 746 ha.

In addition to a lot of bush, oak, cork oak… in 1910 there was a reforestation with different exotic species. And beware, we can meet wild horses. Among the archaeological heritage, the cyclopean wall, the castro of O Alto dos Cubos, various tombs and petroglyphs stand out.

It has an Interpretation Center and five viewpoints over the Miño Valley and the Ría de Vigo.

The Atlantic Islands have been a National Maritime-Terrestrial Park since 2002. They are the four archipelagos of the Rías Baixas: Cortegada and Sálvora in the Ría de Arousa, Ons in front of Pontevedra and the Cíes, closing the Ría de Vigo. Together they cover 8.480 ha, 1.200 on land and the rest marine.

In the part facing the estuaries, they present the sweetest side, with paradisiacal beaches and, in the part that faces the pure and hard Atlantic, the most granite side.

All these islands are reserve areas for the breeding of seabirds. The most abundant are the yellow-legged gull and the European cormorant. The island of Sálvora, rich in legends, is a total reserve; Cortegada is famous for its forest of huge laurel trees; Ons, the only one inhabited, has many furnas (sea caves) and a lot of octopus; and in the Cíes, the most visited, is “the most beautiful beach in the world”, according to The Guardian.