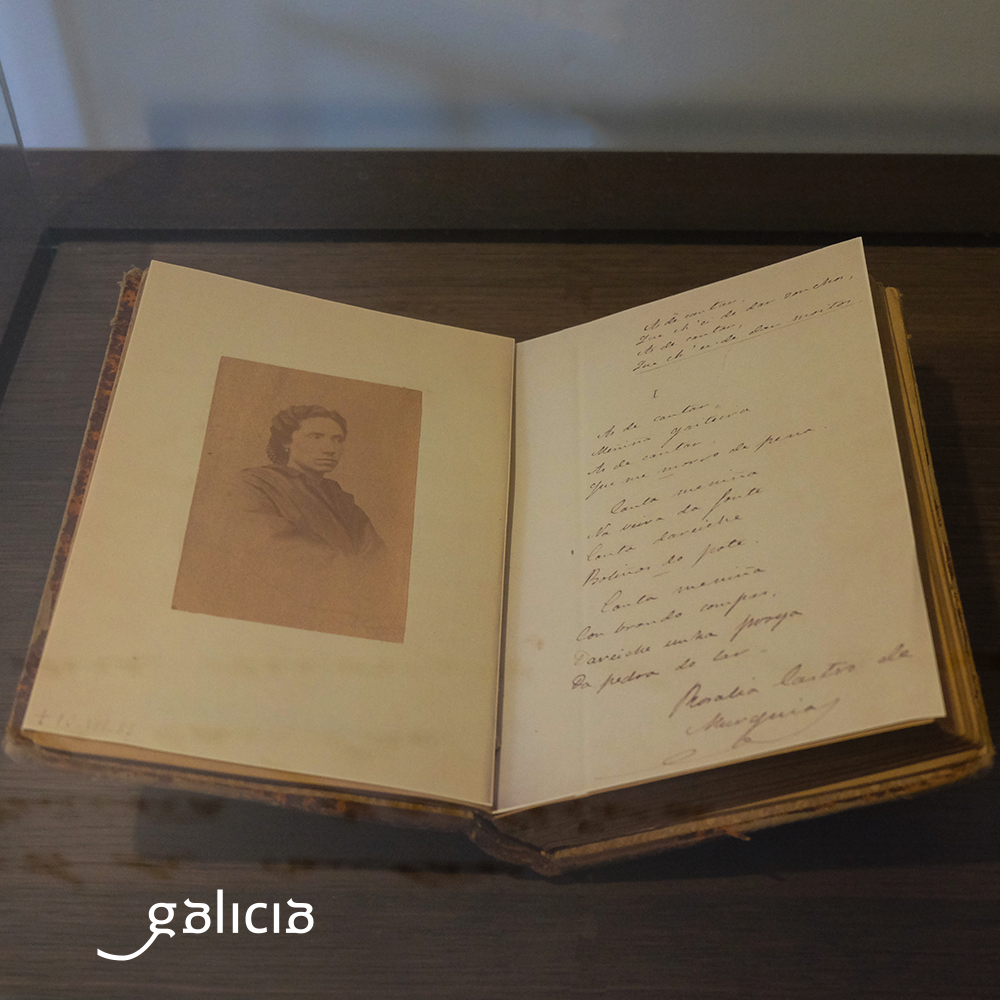 February 24 marks a new anniversary of the birth of Rosalia de Castro, the great Galician poet. Her legacy is still live through her literary work, but also thanks to the memory that is still stored in many of the places where she developed her life. Santiago, Ames, Brión, Dodro, A Coruña, Padrón and Muxía are the stops of a trip that will allow you to approach some of the spaces and landscapes that marked to the author.

Nothing is left of Rosalía de Castro’s birthplace, but it is still possible to follow the trace that the poet left in the Galician capital at the different stages in which she lived there. This Rosalian itinerary begins in the chapel of the Hostal dos Reis Católicos, since she was baptized there, and would continue through some other emblematic places of the old town in which several of the dwellings it inhabited are located. This is reminded of the plaques placed in the Casa da Concha, current headquarters of the Social Council of the University of Santiago, and in the University square, which houses the Institute of Lingua Galega and which was also the home of the priest, writer and historian Antonio López Ferreiro. In addition, there are many ways in which the city remembers and honors the poet. The former Colexio San Clemente hosts the Rosalía de Castro Institute and next to it is the Alameda compostelana, where you can see the monument in his memory raised just over a century ago. From there, heading towards the new area we will cross the street dedicated to Rosalia to contemplate in the square of Vigo another monument in which it is possible to see his face and some of his verses in a large stone monolith. The compostelano tour following the footsteps of Rosalía has to conclude in the church of the convent of San Domingos de Bonaval to visit the Pantheon of Illustrious Galegos and see the tomb where the remains of the writer since 1891 rest after being moved from Padrón.

Rosalia changed his place of residence on numerous occasions and spent several years in Madrid, but it is not necessary to go so far to find several places that were crucial also in his life and in his work. Still a child, she moved to live with her aunts to the village of Castro de Ortoño, in the municipality of Ames. Rosalia experts place there the memories that inspired some of her later verses. In addition, following his steps to that house, known as A Casa da Tarroeira, a group of young university students founded the Galician Studies Seminary there in 1923, as the plaque placed on the wall of the enclosure recalls. In the neighboring municipality of Brión stands the church of San Xulián de Bastavales, whose bells star some of Rosalía’s most famous verses. And a little further south, in Lestobre (Dodro), we will come across the Pazo da Ermida, resting place of the writer and cradle of some of her works.

The Rosalian legacy in Padrón

Padrón is the other key town in Rosalía’s life because she spent the last years of his life there and was buried after his death in 1885. There are several places in the municipality related to the author, such as the Pazo de Arretén, which belonged to his maternal family, or the Adina cemetery, where Rosalía’s remains remained until his transfer to the Pantheon of Illustrious Galicians in 1891. But the great Rosalian legacy in Padrón is in the Casa da Matanza, the author’s last abode and Current headquarters of the foundation that bears his name. After several decades of abandonment, the property underwent an important restoration in order to open its doors as a museum house in the early 70s of the last century. At present, it hosts valuable materials related to Rosalia, as well as modern audiovisual content that helps to make a detailed trip through his life and his work and that makes the visitor immerse himself in the environment in which the author herself lived. The house is also the starting point of a route through Padrón promoted by the Foundation that takes participants to other rosalians places, such as the Casa da Rúa do Sol, home of the writer between the ages of 4 and 10.

A Coruña with John Moore in memory

The different professional responsibilities that Rosalía de Castro’s husband, the writer Manuel Murguía, had, led the family to live in A Coruña in at least two different stages: at the end of the 50s and at the beginning of the 70s of the 19th century. The city reminds the writer in one of his most emblematic cultural venues, the Rosalía de Castro Theater. The building had been built in the mid-nineteenth century and was baptized with the name of the author in 1909. In addition, walking through the Old City of Coruña, on Prince Street it is possible to see one of Rosalía’s houses, where a plaque reminds this illustrious inhabitant. There she wrote the poem he dedicated to General John Moore, who died at the Battle of Elviña in 1809, and the poetess’ own verses were sculpted in stone to accompany the mausoleum of the English general, located in the bastion garden of San Carlos.

Muxía and “The Daughter of the Sea”

Although his stay in Muxía was not as prolonged as in other places, this village on the Costa da Morte is also very present in the Rosalia legacy. Several experts explain that the writer visited Muxía because of her relationship with the Pondal family and that during her stay she participated in the pilgrimage of A Barca and contracted typhus, as did Eduarda Pondal, sister of the famous poet. Eduarda died because of the disease, but Rosalia managed to overcome the ailment and that convalescence in Muxía served as inspiration for her first novel, The Daughter of the Sea, a work of marked feminine prominence and in which Muxía’s landscapes are very present. This relationship has led to the City Council has developed several times a route following the steps of the poet. The Sanctuary of Nosa Señora da Barca (which inspired one of her poems) the healing stones that surround it, Mount Corpiño and the place where the house where she lived was located, and where you can see a memorial plaque placed a few years ago , are some of the places to visit.