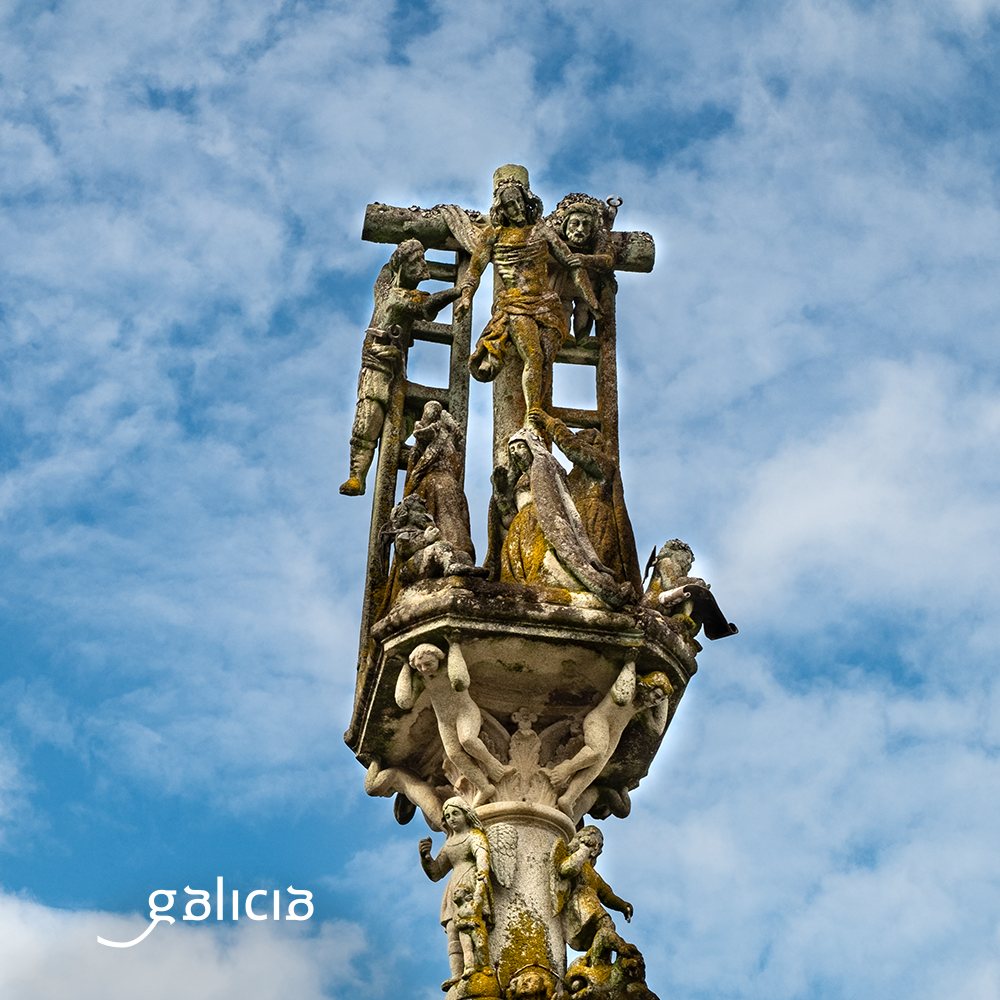 Spread all over Galicia, the “cruceiros”(crosses) are now another element of the landscape of this land and one of the main signs of identity of its villages, towns and cities. It is difficult to specify how many of these pieces are found in the vicinity of churches, crossroads and other points of special significance such as cemeteries or mountain tops, but some estimates put the figure above 10,000. They therefore form a huge heritage, but also of great artistic and historical value. And many of these pieces are also unique because of their sculptural quality, their historical importance or their uniqueness. Below we propose a tour of a small selection of some of the most emblematic crosses in Galicia.

Considered by many as the most beautiful cross in Galicia, this majestic piece located in the parish of O Hío in Cangas was built in 1872, as can be read in one of its carvings. Experts attribute it to the master Cerviño and highlight the detail and variety of the sculptures that can be seen from its base to its highest point. The original sin, the Immaculate Conception and the unlocking of Christ are some of the images that make up this spectacular cross located at a point from which we can also enjoy views of the Aldán estuary.

Its peculiar shape and beauty have led to the unique and descriptive name under which this cross is known in the municipality of Abegondo in A Coruña. It was built in 1787 and although it is currently located on the margins of the AC-542 road, it was originally located on the English Way. The four columns crowned by two figures flanking the pole and linked to it by metal pieces distinguish it from the majority of the crosses that can be seen in Galicia and link it to some of the pieces from the French Brittany.

In the centre of town of Melide (A Coruña), in the middle of the French Way, we find this piece of the 14th century. This dating makes it the oldest cross in Galicia, although some specialists consider that it is not a cross itself, but a cross that was originally part of another set of sculptures and was later converted for that use. In fact, the pole is more modern and the piece has changed location at least three times. In any case, it is an emblematic work.

The cross located in the municipal cemetery of Mondariz could share paternity with that of O Hío, although the reason for its inclusion in this list is very different. What makes this piece a singular monument is its dimensions. Its eight and a half metres in height, of which more than five correspond to the pillar and the rest to the capital and the cross, make it the tallest cross in Galicia ahead of other monumental pieces such as those located in the collegiate church of Santa María del Campo, in A Coruña; the church of Santa María A Antiga, in A Pobra do Caramiñal, or in the village church of Romelle, in Zas.

Some crosses have been protected under later constructions of different types to protect them from bad weather, but in the case of the one located next to the parish church of Xermade, the solution adopted makes it a unique case. A small circular stone disc stands out over the cross as an umbrella or parasol.

Dated to the 15th century, this cross located in the upper part of Baiona is notable for the pyramid-shaped canopy that covers it, but also for the figures that adorn the whole and for the polychrome that can still be seen in them and that relate them to those of the Portico de la Gloria. During the time of the Black Death, the place served as an altar from which to offer mass.

Municipalities of the Ria de Arousa

A total of 17 crosses make up this unparalleled set, as they form the only river crosses. They were built in the 1960s to remember and commemorate the route that, according to tradition, the boat that carried the remains of the Apostle Santiago would have taken to Pontecesures. They are located at designated points along the coast of the municipalities on both banks of the Ría de Arousa: from Ribeira to Pontecesures.

The importance of this monument located at a crossroads near the village of Gondomil does not lie in the cross, but in what lies beneath it: a winged serpent carved directly into a granite stone and which could have originated in some ancient pagan cult. The cross placed later would have the aim of Christianising the place and freeing it from its original meaning.

Its location, in one of the most emblematic points of the French Way, makes the influence of the Jacobean phenomenon and the cult of the Apostle very visible in this cross. Santiago itself is represented on the pillar of the cross with the typical costumes of the pilgrim and several scallops, another of the great symbols of those who make this route, decorate the corners of the capital.